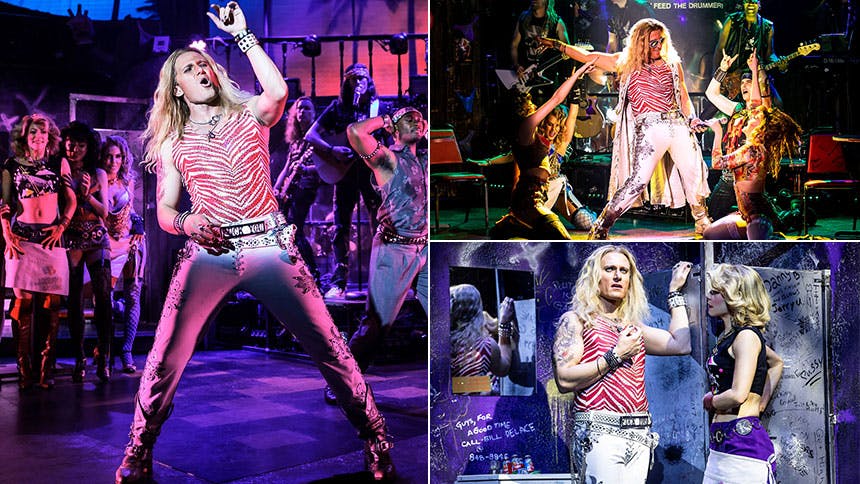 PJ Griffith is funny, sexy, and charismatic as hell as the self-indulgent rock icon Stacee Jaxx in the off-Broadway anniversary production of Rock of Ages. As a former front man for the bands Blue Movie and Blood on the Stereo, Griffith brings street cred to the role of the '80s rock god.

BroadwayBox caught up with PJ (who previously appeared in Giant, American Idiot, & Sleep No More) to discuss his time as a rock musician in LA, the three songs he always listens to pre-show, and his concert rider demands.

1. How did you tap into your inner rock star and find Stacee Jaxx for this production? What’s your pre-show like? Do you listen to anything or do anything to ready for Stacee?
Fortunately, I have sung with bands in every dive bar basement and sweaty punk club in the five Burroughs, so I didn’t have to reach too deep to get my Bourbon Room Rawk on. Stacee always turns it up to eleven—turning a bar show into an arena rock show—making it all about him with sparkly tank tops, gratuitous eye make-up, and sassy dance moves. My ROA “pre-show” involves watching random YouTube fails on Justin Colombo’s (our swing’s) laptop, condemning millennial social patterns with Mitch Jarvis (our OG Lonnie), then scrambling to apply an hour’s worth of contour, lip-liner, mascara, eye-shadow, black nail-polish and fake tattoos at the five-minute call. To get ready for Stacee, I listen to Motley Crue’s “Shout At The Devil”, Winger’s “Seventeen” and Buckcherry’s “Lit Up”—three subtle AF compositions that serve as a solid touchstone into Stacee’s “moment before.”

2. Who do you consider a rock god? Who inspires you as a musician and as a fan?
I’d say my rock idols are Chris Cornell (Soundgarden, Audioslave), Ronnie James Dio (Dio, Sabbath), Brandon Boyd (Incubus), Billie Joe Armstrong, and Trent Reznor (Nine Inch Nails). I feel like my current voice and personality is drawn from mimicking these guys daily over the past few decades.

3. Rock of Ages takes place on the famed Sunset Strip in Los Angeles. What’s your favorite memory from when you lived in LA and were leading a band? What did you love most about that time in your life?
My favorite memory of fronting Blood on the Stereo was our hysterical weekly residency in November 2006 at The Lava Lounge in dirty Hollywood. My brother Teddy had just joined the band on guitar. We would pull up in our beat-up, about-to-explode, seat belt-less van (The Silver Bullet) and clown around at a deafening volume in a sticky '70s over-packed Tiki Bar, climbing/jumping off every piece of furniture/equipment mid-song. (Which was very popular in 2006 rock.) And then one night, an underage punk wasn’t allowed in and got pissed off and literally threw a literal Molotov cocktail at the door. They cancelled our show and closed the bar FOREVER. That was a pretty metal end to a mythical LA spot. We were all broke and hungry and arrogant and just kicking out the jams solely because we felt they needed to be kicked out. And we were usually paid in beers/well drinks. Here is a clip from those days of our never-released, totally-not-a-hit song, “The Tear Gas Only Makes Me Hornier”.


4. What was your craziest audience interaction while you were part of Sleep No More?
I would pick on people from the stage at Manderlay (the speakeasy) as the pathological liar/sex-addict/con-man “Bobby Wallace”. Once, I picked on Skrillex. Another time, I picked on J.J. Abrams. My bad. It’s dark in there. And they love a fog machine. Needless to say, I am not in the next Star Wars. When I left the show, rumor is my ex-wife shot me in the face and I am buried beneath the floorboards in front of the stage.

5. What are five things that would definitely be in your concert rider if you were doing a stadium rock tour?
-Everything bagel flavored hummus with baby carrots.
-Honey-roasted peanuts.
-3 exotic FroYo options. But surprise me.
-A puppy dressed like a 19th century dandy.
-An old-school Nintendo with both a PowerPad and PowerGlove. (To decompress post-show, before traveling to the next stadium.)

Don't miss PJ Griffith as Stacee Jaxx in 'Rock of Ages' at off- Broadway's New World Stages through January 12, 2020.