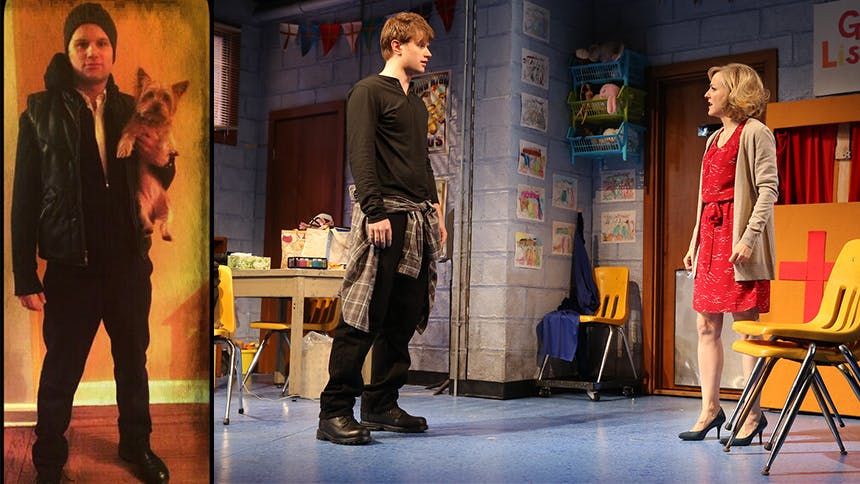 In the jaw-dropping new Broadway comedy Hand to God, the only person more badass than the demonic, expletive-lobbing puppet Tyrone is Timothy, the high school hooligan who just happens to be hot for teacher. Michael Oberholtzer makes a killer Broadway debut as Timothy, and based on the interview below, Oberholtzer is just as fun off-stage as he is delightful to watch onstage.

1. What I tell friends and family about this show and Timothy before they come:
Nothing. Absolutely nothing. To have no idea what you are about to experience is the best way to see this show. Now if I'm pressed, I'll say something like, "It's about people who are desperate to be seen and heard; It's about grief and loss; various kinds of love and violence; the darkness inside human beings. Lots of blood, a demonic puppet, inappropriate sex and oh yeah, and it's fuckin' hilarious! As far Timothy, he is the abandoned love child of Tim Robbins & Anna Nicole Smith.

2. I would describe high school me as:
Remember Jeremy Piven as 'Droz' from P.C.U.? Yup...* Except I sang in the show choir.

3. Authority figure I’ve had a major crush on in my time:
Well I pretty much hated authority growing up but the only one who still sticks out has to be Jenny McNutt. That's right. McNutt. Mom, stop reading and go run an errand. She was my first tap dance teacher. She had a little tattoo on her ankle that she never could quite cover with make-up and a rack that would make any eleven-year-old boy want to play with himself...in the dark. Mmm. Shuffle-Ball-Change has never quite had the same meaning for me.

4. I’m not on social media because:
Part of the stipulations of my plea agreement prohibit me from having an online presence til 2025. Legally I'm not allowed to say any more than that. I just called my lawyer.

5. Moment I knew I wanted to be an actor:
Well actually what I really wanted to do was work for The Phoenix Foundation but when I found out that McGuyver was actually Richard Dean Anderson, and RDA was an actor...well you get the idea.

6. If I were creating a puppet at ministry, it would be:
Sloth from The Goonies.

7. It’s no church basement, but the craziest place I’ve gotten busy:
Mom, if you've made it this far skip to question 8. I got real busy once in Fort Tryon Park. It was a warm foggy evening and the GW Bridge was lit up. I remember looking at it and vividly thinking, "This must be what it feels like walking into heaven.”

8. Album I was all about in high school:
Wu-Tang...Awe yeah again-n-again.

9. If my friends had to describe me as a character from TV, they’d say I was:
A cross between Jax Teller from Sons of Anarchy & Jack Tripper from Three's Company.

10. Outside of Hand to God, my favorite book, TV or film that takes place in Texas:
Damn that's hard. Here's a few: Red River (One of Monty Clift’s great performances and a pretty good western). Tender Mercies. The Last Picture Show. Dazed & Confused.

See Michael Oberholtzer’s gut-busting Broadway debut in the comedy everyone’s talking about, ‘Hand to God’ at the Booth Theatre.