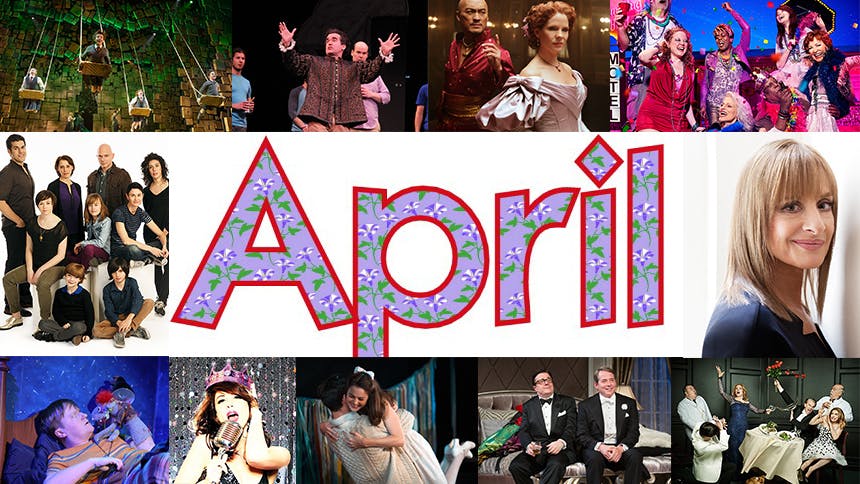 It’s April, which means Broadway is on Jessie Spano caffeine pills shouting, ‘I’m so excited’ and crying until someone named Tony tells her stop. Below are our 10 picks of what to see in this oh-so-busy month.

1. In the month of April, we are giving it up to Broadway’s Matilda. It’s the perfect show for the whole family this month (spring break, Easter break, a random Friday night, whatever). The award-winning musical has a beautiful, uplifting story at its core, an amazing score and is a visual feast for the eyes—you don’t need to be a kid to get completely lost in all the wonder and magic of Matilda.


2. Something Rotten! is the kind of musical you want to buy your tickets to immediately. Set in 1595, this sidesplitting, ab-workout of a musical is about the creation of the very first musical, and if you enjoyed The Producers, Spamalot or The Book of Mormon, this is the show for you. You might even have to go back twice because you laughed over so many jokes the first time. Also, Brad Oscar’s song “Musical” is worth the price of admission, so tick-tock.

Brian d'Arcy James as Nick Bottom and Brad Oscar as Nostradamus in rehearsal for 'Something Rotten!'

3. Now, if you like to be emotionally rocked at the theatre then you want to spend an evening at Fun Home. You won’t be able to get on your feet fast enough to give a standing ovation to this musical about a lesbian cartoonist and her relationship with her closeted gay father. After an acclaimed run downtown, the Broadway transfer of Fun Home has turned up the heat to high: director Sam Gold’s in-the-round staging is so powerful and the performances will be the talk of awards season.


4. It’s not for the faint of heart, but the comedy Hand to God is the funniest play you’ll find on Broadway. Demonic sock puppets, shocking sex scenes and a killer performance by star Steven Boyer will have your jaw practically glued to the floor.

5. Another American play to get excited for is Airline Highway at MTC. In a big season of British transfers, you gotta rep the hometown heroes and this Steppenwolf original has plenty to root for. A fantastic cast, a set that gets entrance applause and a living funeral you won’t soon forget makes Airline Highway a hot ticket this spring.


6. LCT’s The King and I has been one of the most anticipated musicals of the entire year and it’s finally here. A beloved R&H score, tons of Tony Awards buzz and a boat on stage—what more do you need?! And if you go on April 9, you can stay for Lincoln Center Theater’s Platform Series in the lobby of the Beaumont featuring the revival’s director Bart Sher and choreographer Christopher Gattelli.

7. Tony Award winners Joe DiPietro and Kathleen Marshall team up to bring Broadway the ‘50s-set farce Living on Love. The romantic comedy stars opera icon Renée Fleming, has a Jerry O’Connell nude scene and features Trixie the dog, so that’s more than enough to get me to the Longacre Theatre.

8. The hottest hit of the fall season is reborn again (for the third time!) thanks to the return of Nathan Lane and the arrival of T.R. Knight. If you haven’t seen It’s Only a Play yet, this is the month to get on it!


9. After 20, 672 performances, The Fantasticks will end its legendary off-Broadway run on May 3, which means you only have a month to get your butt over to the Snapple Theatre to experience this modern twist on the Romeo and Juliet tale.

10. There’s a ton happening at 54 Below in April but for me it boils down to two Olivier-winning divas: Patti LuPone and Lesli Margherita. Patti is serving you her Lady with the Torch show April 2-14—bonus points if you can cry, clap and sip your cocktail at the same time…‘cause you’ll want to. Then Matilda monarch Margherita stars in the hi-larious solo show All Hail the Queen April 25 and 26. If you love her on Twitter, you’ll live for her live at 54 Below.

It's Only A Play
Best Priced Tickets

The King and I
Best Priced Tickets

Feinstein's/54 Below
Best Priced Tickets
Newer
Photo Roundup! See All The Pics from Clay Thomson’s Matilda Instagram Take Over
Older
An American in Paris Stars Share Their Most Cherished Experiences in La Ville Lumière
Sign up for BroadwayBox Discount Alerts