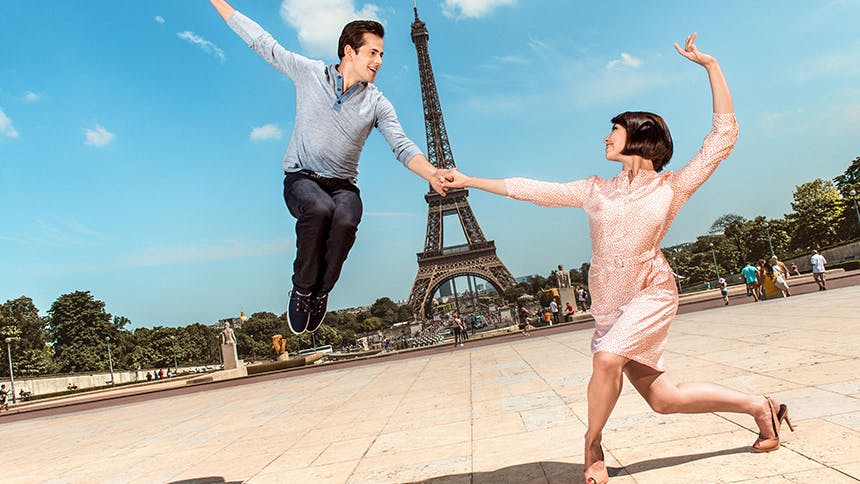 March 31, 1889: The Eiffel Tower is opened to the public. 126 years later, New York is enjoying our greatest gift from France since the Statue of Liberty: the new musical An American in Paris. Set in the City of Light, this romantic tale of love in a newly liberated Paris is the kind of stunning masterpiece you so rarely get to see in Times Square.


The stage adaptation of An American Paris received its world premiere actually in Paris, at the Théâtre du Châtelet, this past November before arriving at its New York home, Broadway's Palace Theatre. BroadwayBox caught up with the musical’s six stars to talk about their experience in Paris and find out, what was the most personal, quintessentially Parisian day you experienced?

For me, it was our first day off over there and I met the three boys (my three leading men) for breakfast and we went for a walk along the Seine. We found the bench where Lise and Jerry meet and it was so reminiscent of the movie, and to be with Robbie and have our picture there with the Eiffel Tower in the background—for me that's a day I’ll remember forever.

My most memorable day in Paris was a day I had an afternoon off and had the opportunity to grab a coffee and a croissant and sit along the Seine. The day was so beautiful and sunny. I just painted the picture for myself of where Lise would be coming down to meet me and what I was sketching when she came down, and it became such a real moment. Then to get the opportunity to go to the theatre that night and do the show after having put myself exactly where that scene takes place was so cool and so real.

Probably my favorite day in Paris was the day we went to the Pere-Lachaise Cemetery, where Edith Piaf and Oscar Wilde are buried. It’s just so peaceful—you felt a million miles out of the city.

I will say the most amazing thing about Paris is you will have a plan for the day—to go from Point A to Point B—and the most amazing thing is getting there. Every single street you go down or corner you turn is new and beautiful and breathtaking; everything is stunning. My favorite thing was wandering—having a goal and a place to go but just getting there and taking in the city.

I was there the day of the attacks and it was a tremendous day of depth and gravitas for me because it brought back feelings of 9/11. But I also felt the spirit of solidarity—people coming together—and that’s universal. It’s how we came together as New Yorkers after 9/11, the Parisians came together and I was able to observe the universal feeling of what terrorism does because it wasn't only New York; I felt the same thing in Paris from the Parisians. It made it a more global world for me.

One day the principals went to the Carnavalet Museum in the Marais District of Paris. We wanted to do research because there was an exhibit about the anniversary of the liberation of Paris and there was all these incredible photos and video footage of breadlines and soldiers coming in and freeing the city. And it helped us get closer together and it helped our characters. The museum itself was in a gorgeous old mansion. You walk in and you’re just blown away. Then we walked down the street and Robbie showed us this coffee/lunch place that was one of his favorites. It was just one of those magical days there.

Experience all the love, grandeur and magic of the City of Light in Broadway’s An American in Paris at the Palace Theatre.