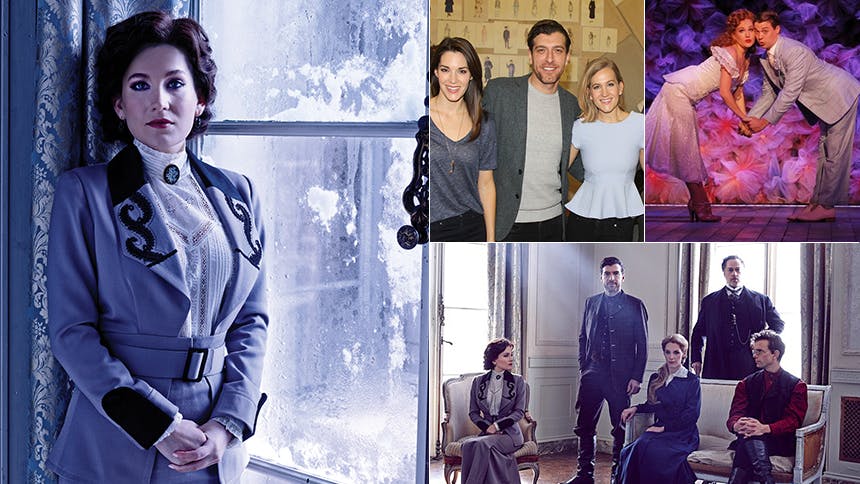 The lush, have-to-see-it-to-believe-it musical adaptation of Doctor Zhivago is readying to set Broadway aflame (there’s fire in the show) beginning March 27 at the Broadway Theatre, and while we can’t wait to see West End hunk Tam Mutu and Kelli Barrett decked out in fur, falling in love, we are legit counting the minutes until audiences get a taste of Lora Lee Gayer’s Tonia Gromeko. Gayer’s character Tonia is Zhivago’s wife and the mother of his children, and audiences see her go from Russian aristocracy to a woman doing what she can to keep her family afloat and her husband at her side. Below, BroadwayBox chats with the ridiculously fun Broadway blonde (only Tonia’s a brunette) about her experience as young Bernadette Peters in Follies, fighting for Tam Mutu’s love and her side job as a cat savior.

1. When Tonia and Lara meet face-to-face, they sing this gorgeous Lucy Simon song, but what if instead you two got into an Empire-like catfight over Tam; who would win, you or Kelli?
Oh Kelli would totally kick my ass. Are you kidding me? The fight would be me running and Kelli chasing after me.

2. Seriously, Doctor Zhivago on Broadway: am I going to cry? I hear snow and fire onstage. How epic is this production going to be?
Epic doesn't even begin to describe it. We keep laughing because, in tech over the speakers, our stage manager will be like, ‘Let's take it from the beginning of the scene. We’ll be doing fire, pyro, six of the gunshots, bodies thrown onto the stage and the train will be moving.’ And we’re all like where are we?! It’s epic technically, Paul Tazewell’s costumes are so genius and the music is so epic. I think you’ll probably cry; I cry. It’s a moving story and everyone can somehow relate to it. Everyone in the story loses their love at some point, and I think everyone can relate to that…and if you haven’t, well, screw you.

3. Do you remember your reaction to seeing yourself in Follies wearing a mess of red, full Bernadette curls? (Upper right photo)
To be completely honest I was like, ‘I look great. This is great.’ The red just worked really well. It’s funny and awesome, when we would come out the stage door the other young people would always get asked for autographs and then I’d come out and they be like, ‘Who are you? Don't talk us.’ But I loved that wig and I’ll never forget the one time I was walking into the hair room and Bernadette’s wig was on the mannequin head—it was terrifying. It was like she’d been scalped. It was so real.

4. So since we’re in Russia, what’s your go-to vodka cocktail, and is there a crazy story associated with having too many?
A vodka extra dirty martini and I have a story where—I don't know what I was thinking—I had too many of them and the next day was the travel day for a show I was doing at Goodspeed. I was so hungover I could barely stand up; I had a baseball hat on and I wasn't talking to anyone…then three weeks into the run when I was friends with everyone, they were like, ‘What was wrong with you? We definitely thought you were crazy.’

5. Let’s talk about that adorable cat you have on Instagram. You actually found her? Like on the street?
I was in Brooklyn four years ago and I heard a kitten cry and was like, ‘We have to find it!’ And it was coming from the engine of this truck, and there was a number on the side of the truck and I called it and low and behold they picked up (it was like 10 o’clock at night). He seemed kind of disinterested but luckily his wife or girlfriend was listening and she was all, ‘Oh my god, that sounds so cute. You have to go see it.’ So he came and we got her out. And her name is Ali Cat because A. she’s an alley cat, and B. the name of the truck was Ali’s Moving and Shipping.

Get your tickets now to see Lora Lee Gayer in the epic Broadway musical ‘Doctor Zhivago’ at the Broadway Theatre.

Doctor Zhivago
Best Priced Tickets
Newer
Stop, Drop & Give It Up for It Shoulda Been You’s Lisa Howard, a YouTube Resume
Older
#AirlineHighway Stars Take to Twitter to Introduce Their Crazy Characters
Sign up for BroadwayBox Discount Alerts