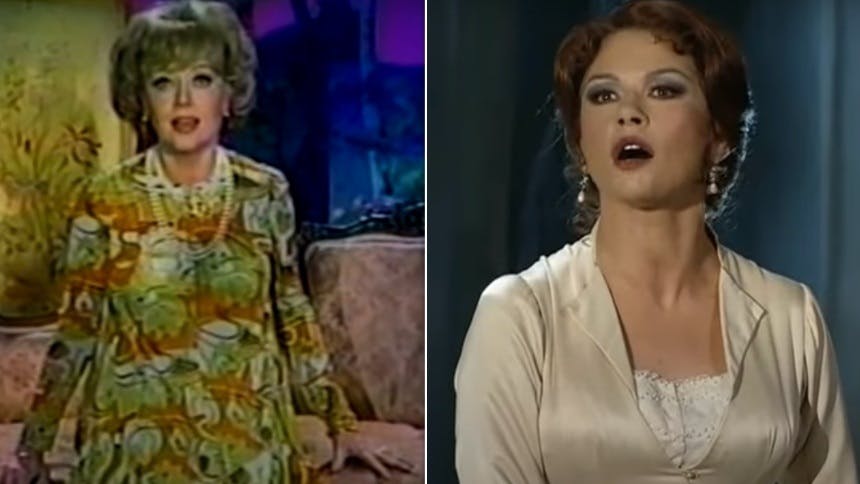 Transformation Tune: "Send In the Clowns" from A Little Night Music, by Stephen Sondheim


There's something about the dazzling Desirée. In A Little Night Music, she sings this Sondheim classic to her long time love Fredrik - who refuses her plea for him to run away with her as he is now married. Desirée was originated by Miss Winnifred Banks herself, Glynis Johns. As you'll see in the revival transformation clip, this role is a match made in heaven to movie stars! Have a peek at Glynis' IMDB page from 1938 - 1964 alone!

Watching this clip, the viewer is hit immediately with Glynis' terrific cynicism. You can't help but hang on to every lyric. She is filled with so much assurance and at the same time nostalgia. The hopefulness on "well maybe, next year" - holy smokes! She won a Tony for this and this less than three minute clip is all the reason we need!


We've got another Tony winner with Catherine Zeta-Jones! Her portrayal of Desirée was defiant yet so effortlessly poised. This performance feels like a monologue at times too. "One who can't move" - the acting choices are so strong, especially during the bridge. We love how she can make the word "flair" so exciting.


Catherine Zeta Jones was replaced by Sondheim musical mainstay Bernadette Peters. Talk about a match made in heaven. We had to include Ms. Peters for her pronunciation and attack of just the word "rich" the first time she sings it. It's a polar opposite performance to Catherine's, playing the role more demure and at times devastated.

Newer
Hot Clip of the Day: Chita Rivera Dancing WEST SIDE STORY In 1957 or 2007? We Can't Tell!
Older
In Praise of Shoshana Bean and Cynthia Erivo: 5 Magical Duets
Sign up for BroadwayBox Discount Alerts