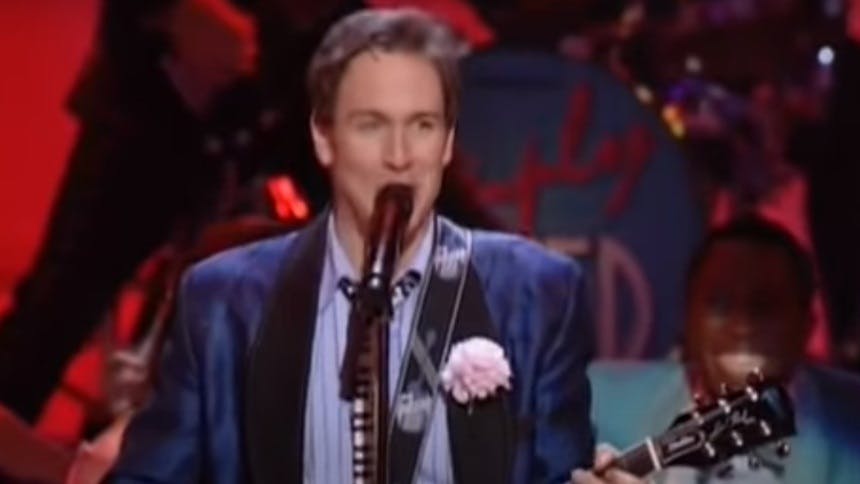 We follow the tale of wedding singer Robbie Hart, his riotously funny grandma and his journey to find love with Julia (soon to be) Guglia.


Have a listen to the cast album and follow us track by track expressing ourselves "Not That Kind Of Thing" just with text but with some GIF reactions!

The guitars, the synthesizers, the 80's dance moves that we want to dance listening to this song. It's so happy,energetic and this is how you start a cast album!

Oh bubble-gum pop heaven! Ladies, gentlemen - this is for all you sweethearts dreaming of your future weddings. You start that make believe registry in your head!

3. A Note from Linda

Not since Bye Bye Birdie's "Put On A Happy Face" or Annie's "You're Never Fully Dressed Without A Smile" has a character emphasized the importance of smiling than when Linda utters "dot dot dot smiley face."

This is a fun one and we feel like we just fell into an 80's sitcom. Just a couple of ladies gossiping in perfect harmony about when that diamond ring was going to arrive.

Definitely not the peppiest song on the album - but it is the Adam Sandler and Tim Herlihy's tune featured in the movie. Moving on!

6. A Note from Grandma

Let's all remind ourselves that Rita Gardner was the original Luisa in the 1960's Off-Broadway musical The Fantasticks. Great, now hit play.

Rock 'n' Roll Time. So Stephen is a rock star as Robbie. Oooh to be one of the dumped. At least you didn't put a top hat on your cat and ask him to your prom. At least we hope you didn't - and listen if you did - judgement free zone!

8. Come Out of the Dumpster

We don't think we can name five Broadway songs about trash and/or a dumpster but here we are. It might take some strength but sometimes we need Laura Benanti's gorge vocals to get out of our metaphorical "dumpster."

Trumpet. Solo. Not since Mazeppa.

It's like we fell into a 1980's film and we LOVE IT. Those beginning chords! Let's grab a Crystal Pepsi and head to the mall! Did we live through an entire 80's rom-com during the course of this song? Yeah, maybe!

12. Saturday Night in the City

Amy. Spanger. Thank you. For those lucky to have seen this Act One closer live, you know the magic of her crazy high belting, the FIRE dancing and yes - the signature Flashdance water moment. Brava Amy!

These orchestrations though. There is a killer dance arrangement in the middle of this song and some sassy one-liners by the ensemble. Richard brings a rock edge to this while keeping cool as ever. "Did you get my memo on that!?"

This is a sweet little reprise of Julia's first number. We wish it was a longer reprise because Laura sounds marvelous.

15. Right in Front of Your Eyes

And aren't these the best love stories? When the one you were meant to live your fairytale life with was there the whole time? Then there's an uptempo dance break to dance about your feelings towards each other haha

"Everything's gonna be all right!" The ultimate bromance anthem. The character work by the cast is top notch. Also - the lyrics. So funny.

This is a dreamy love duet between Robbie and Julia and we are in love with it. Robbie sings it outside of Julia's house and we can't NOT think about this gif's movie. That chord modulation when Laura starts singing? Come on! Then when they harmonize? And repeat.

Felicia Finley is fierce as heck in this 80's rock dream spectacular as Linda. So total opposite to dreamgirl Julia.

So happy we get to hear this song again!! The writers knew audiences could only wait one song to hear it again!

In the words of George, "word to your grandmother." Rita Gardner is rapping on Broadway and we are all the better for it.

Swooooooooooon. The iconic Adam Sandler & Tim Herlihy tune featured in the film and wrapping up the story here with Robbie and Julia. Stephen is so sweet on this track.

Are you doing the running man? Us too. Such a fun finale and everyone gets a chance to shine. It's also a tiny megamix which we always appreciate with a second reprise of "If I Told You" with the whole cast. That final chorus of "It's Your Wedding Day" is so much fun. We might need to listen to this all over again!