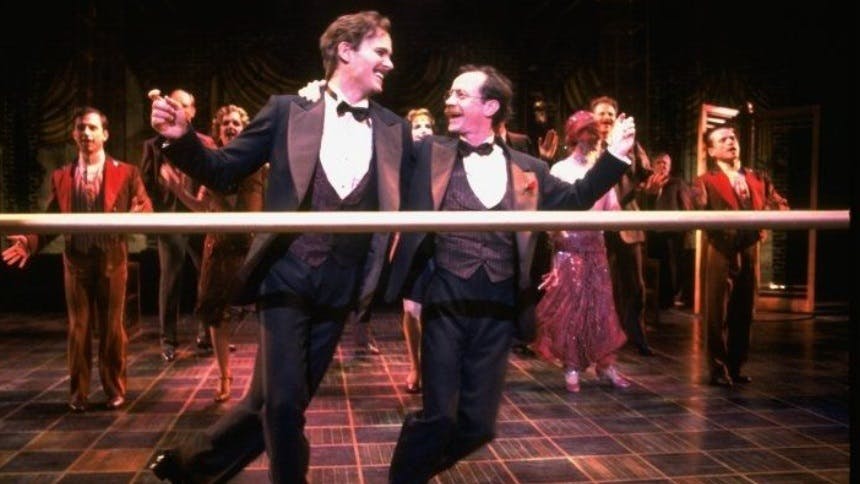 
Ulterior Motives: Cheers to the Broadway production of the Tommy Tune directed and choreographed 5 time Tony Award winning musical Grand Hotel which opened November 12, 1989. The musical, set in 1920's Berlin, showcased the revolving door of guests at this glorious grand hotel. Michael Jeter's Otto Kringelein dueting with Brent Barrett (who replaced original Baron Felix von Gaigern the incredible David Carroll) with "We'll Take A Glass Together" is one of the most iconic of iconic Tony performances. We would be remiss if we didn't mention the marvelous Jane Krakowski who in her second Broadway musical portrayed Flaemmchen singing the hopeful "I Want To Go To Hollywood" in the production.

Ultimate 🙌 🙌 moment: When it comes to legendary Broadway commercials, this gem is always top of mind. Everything is all well and good until 0:30. In December of 1991, before the musical moved from the Martin Beck Theatre to Broadway's Gershwin Theatre, Cyd Charisse stepped into the production as a replacement for Elizaveta Grushinskaya, the ballerina. The fun really begins at 0:32 with one of the quotes heard 'round the world followed by the SECOND quote heard 'round the world at 0:56. A commercial follows for The Will Rogers Follies - and you know, why not. We love a vintage Broadway moment.