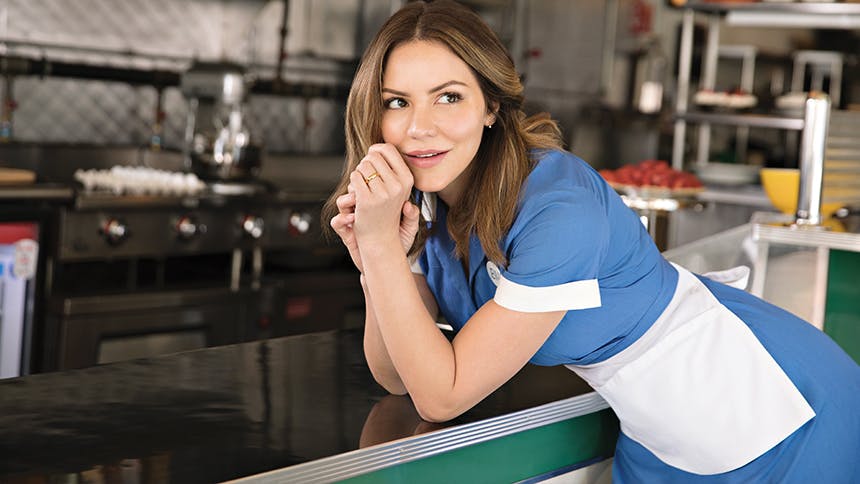 For months, Broadway fans speculated which actress would have the honor of closing out the Broadway run of Sara Bareilles’ Tony-nominated musical Waitress

, and to our delight, the final Jenna is Katharine McPhee. The Smash, American Idol, House Bunny and Scorpion star first made her Broadway debut as Jenna in 2018 before going over to London to open the original West End production of Waitress in early 2019. Now, she brings her fantastic Jenna back to NYC one final time.


BroadwayBox recently caught up with Katharine to discuss her journey with Jenna, the realities of fame, and her Wicked/Smash fantasy.

1. The final Jenna—how did that happen? What was your reaction to being asked?
It was actually a text message from Barry [Weissler], the producer, which is so like Barry. In my experience, he definitely likes to go directly with to me before he goes through all the hoops of like the agents and the managers. And the text was like, “You know, we'd be remiss if we didn't ask you to close out the show; you may have heard of the show's closing.” I was really shocked. But then, of course, when he texted me, I was really honored. I was honored when he came to my dressing room, when I was making my debut here, to talk to me about opening the show in London. I was really honored then too.

2. What did you discover about Jenna during that recent London run? In what ways will that run influence this return run?
I have to say that I got to work a great deal with Diane Paulus, the director. Much more so than I did for my debut here—because I basically just had three weeks to learn it and I was put in—she was popping in, and out, giving me notes here and there. And so, to open the show in London, it's basically like a whole new show and you have to work with new actors—I was the only one who had had experience with the show. So, for me, I would just say that I got to have more meaning behind some of Jenna's moments on stage with the director's guidance. When people return, if they come and see it again in New York, maybe they'll find her more layered.

3. When was the first time you felt really talented growing up?
What a nice question. Yeah, I remember in second grade there was a Christmas pageant. I sang “Jingle Bell Rock”. I was probably six or seven, and I remember hearing a little vibrato— a little vibration in my voice. And I remember feeling like, “Wow, I have a future in this.” So, I was quite young, actually.

4. Your Instagram bio says, “No life is perfect. Don’t let Instagram fool you.” For you, what’s the hardest part about living with fame?
The hardest part for me is sitting at a dinner, and it's just obvious that a table beside you or across from you is obviously talking about you or the person that you're with or whatever. It seems silly, but it's hard to not just automatically go to a negative place—like they're saying something bad. So that, for me, has maybe been the hardest part—where you somehow feel like they're talking badly about you. But then you just have to learn how to shut your mind off and not let it harden you. Just learn how to smile and be even more present.

5. Your Twitter presence is everything! What’s the latest update with a Smash reboot or the Wicked movie? Has Twitter affected either?
It's really fun to engage with fans on that level. I just like to use Twitter to live my dreams that are not necessarily going to be possible. Like a Smash reboot season three—as much as I try —is probably not going to happen. Or, I could play a high school student on Broadway, but a movie doesn't necessarily work like that. I'm 35, I'm not going to play Elphaba, a 16-year-old in high school. For me, Twitter is like an alter ego.

Hurry to Broadway’s Brooks Atkinson Theatre before January 5, 2020 to see Katharine McPhee and the closing company of ‘Waitress’.