Becky Gulsvig Takes on Seven Questions About Come From Away, Performing "Me and the Sky", and Advice for Girls Playing Elle Woods 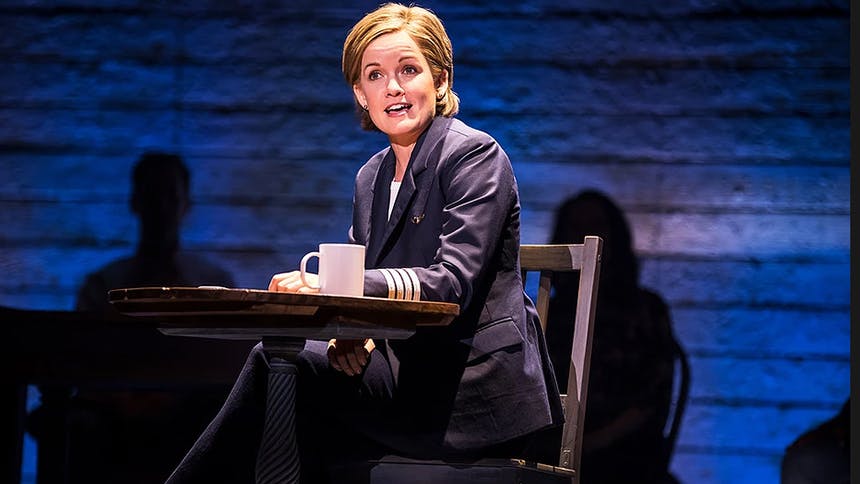 Becky Gulsvig soars as Beverley Bass, Annette, and others in the blockbuster, Tony-nominated Broadway production of Come From Away

. Becky originated the role on the musical’s national tour in 2018 before replacing original cast member Jen Colella on Broadway in November of 2019. Becky stops the show as pilot Beverley Bass performing the show’s 11 o’clock number “Me and the Sky”.


BroadwayBox recently caught up with the former Hairspray, Legally Blonde, Beautiful, and Disenchanted! star to discuss what it’s like to perform David Hein and Irene Sankoff’s “Me and the Sky”, her initial experience seeing Come From Away, and why she never thought she’d play Beverly on Broadway.

1. How does it feel to perform “Me and the Sky”?
I love singing “Me and the Sky”. It is super fulfilling from every aspect—vocally, it's really fun, and emotionally, it's very satisfying. And it is a super awesome piece of history to be talking about. It shows girls that they can do what they want to do—be strong and persevere. It's so great when the girls stand up in the back and we get to share it all together. I never tire of singing it.
How has your relationship with the song changed over time?
It's just been nice to have a chance to let it grow a bit and just live in it for a while. I feel like you share this song, you share this story, you talk to the audience. On tour, houses are huge and you don't hear anything back. And I feel like [“Me and the Sky”] is a conversation in a way that other songs aren't. That's the whole nature of this show. You actually get to talk to the audience in this story.

2. What are your thoughts like in the moment before the number?
I just sort of take a breath and just prep myself to tell the story. We've just run off stage from “Screech In”, so we've been laughing and having a hoot and a holler and then I have to calm down and sit in a chair by myself. So, I stand in the wings and watch them finish that song, taking the joy of that, and then just take a breath and go.


3. How did your interactions with the real Beverley Bass inform your performance?
Just in that cool confidence she has. I'm not very good at impressions and, luckily, they don't want that. And to be honest, I relate with her so strongly because that's how I felt about theatre. It's what I loved and it's what I wanted to do. And, of course, you get psyched out along the way here and there, but I'm sure she did too and she persevered. She's been very gracious and very kind and supportive to me, so I'm very thankful for that.


4. What was the most memorable tour performance for you?
Actually, it would have to be before we left New York. It was the first time Bev [Bass] and Tom [Stawicki, her husband] saw the tour. It was in the rehearsal space but we had a turn table, so we were able to fully rehearse the show technically—which was a real gift because it's super complicated. The Broadway cast snuck in, and then Tom and Bev came. I was ridonculously nervous because they were literally sitting two feet in front of me. The mock turntable took up the whole room and there was no space. So there I was performing all of those phone calls with them two feet in front of me. I'm calling Tom and Tom is staring at me. Singing “Me and the Sky” was nerve-wracking that day. But they were so kind. My cast spent the whole time watching them watch the show. So, it was just a really neat full-circle creative moment that people don't get to experience very often.


5. Come From Away leaves people absolutely wrecked by the end. What’s the last thing you saw that got you emotionally?
Well, the most recent honestly, was this one [Come From Away]. I saw it on a night off from School of Rock and went with my husband, who's Canadian; and I was in New York on 9/11, and there were just so many things to be had in this show that I related to and appreciated. Not to mention, I really just think it's brilliant. As an audience member, I adored it. I had nothing to do with it and I loved every minute. We had to go sit at a restaurant and just sit and talk about it afterwards. I was so affected.
Did you know immediately you wanted to be a part of it?
No. What's funny is I didn't think there was a place in it for me. I didn't think I could be Beverley. And when I started auditioning for the tour, the breakdown said in your 50s, and I was like, “Well, I'm too young, but I'll go in. Sure. I would like to be in this show someday.” But then it just kept going well and going well and going well. They kept giving suggestions like, “Could you just age yourself up a little bit?” But it all panned out and it's been so satisfying.


6. Have you kept anything sentimental from one of your Broadway shows?
I kept the Elle Woods necklace that was specifically altered. It was the Tiffany's one, but it was altered to have a real clip, not the feed through latch that Tiffany’s made. Of course, it's so beat up but that's cool. And I take a poster from every show and I have everyone sign it. When you leave the [Come From Away] tour, they're giving everybody these fish that everybody signs. So, it's more just the collection of a little bit from everything that I treasure—a roadmap, which is special.


7. Legally Blonde is performed in high schools and colleges around the country right now. What are three things you would tell young people playing Elle Woods?
Take care of yourself; have fun; and be true. Be grounded. Know the message of the story. Enjoy the sparkle, but also find the ground.


See Becky Gulsvig in Come From Away at Broadway’s Schoenfeld Theatre.