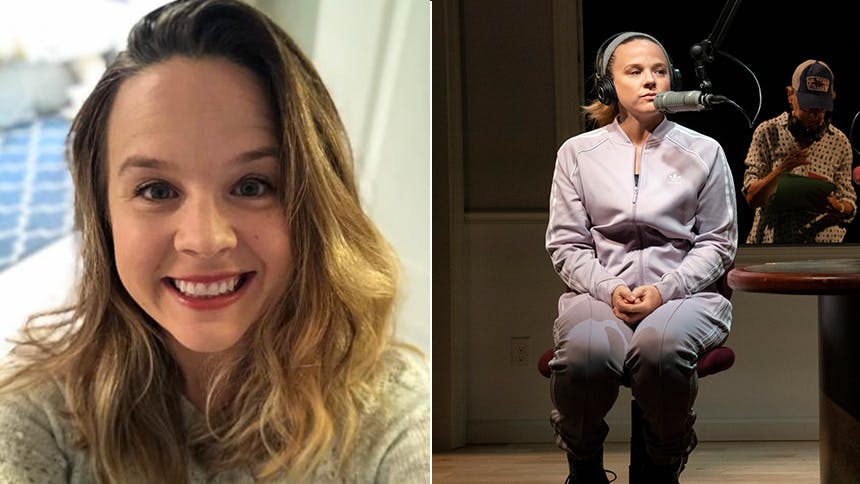 . Lenne plays several roles in the Second Stage Theater production, including a teenage Kris, who has been bounced between a few different caregivers throughout her short life and has thrown herself into sports and medicine. 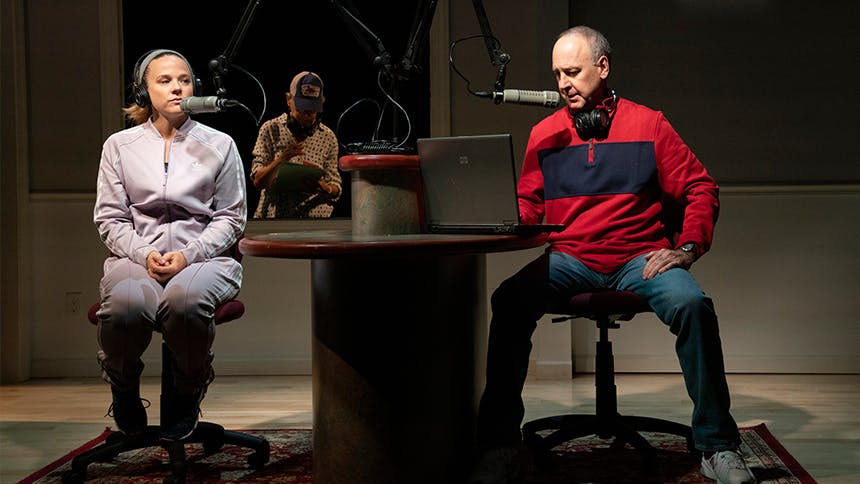 Scroll on as BroadwayBox catches up with the singer/songwriter as she talks about playing Dawn in the touring and Broadway companies of Waitress, working with Will Eno on this play, and her musical inspirations.

1. What attracted you to this piece at first? How did you dig into your Chris?
The language grabbed me first. Will Eno has a unique kind of quotidian, prosaic poetry to his work. It is so simple and human, and yet these buoyant phrases suddenly lift up and out of the circumstance and hit you right in the heart or gut, depending on the moment. I dug into my Chris (Kris) through what she wasn't saying. The history of loss and upbringing of not having anyone who could reflect back to her who she was but that these losses happened to her at a young age, and she's had time to process the loss but in my mind, not really heal. The deep mother/father wounds she has, she doesn't know they are there lurking in her and will come out in their own unique ways throughout the play. As Will said, we see Chris/Kris here doing ok, she's coping and other people are poking at the wounds. I tried to dig into the wonder, the unknowing of how it will all crumble later.

2. What was the most illuminating thing director Kenny Leon or playwright Will Eno said to you about The Underlying Chris?
They both encouraged us to embrace the mystery of Chris—that the tone of this piece was less about tangible, factual elements grounded in reality but more about the mystery of identity and being human. So, questions like, "Wait, how come there are 2 Chris' in this scene?" become less important and rather the investigation into who these two Chris' are and where they are on their journey is paramount.

3. What do you tell your friends and family about the show before they come see it?
I tell them that it is ok to be confused! That some of the magic of the piece is in the discovery and unwinding of the riddle. I really believe it requires an active participant in the audience.

4. What was your biggest onstage mishap during Waitress?
Oh boy. Well, my favorite is more of a "save" from a mishap when Ogie (Jeremy Morse) accidentally threw the flowers into the audience as the button of “Never Getting Rid of Me”. Dawn (me) is supposed to catch them. I played a lot of sports growing up so I instinctively lunged for them and had my toes ON the edge of the stage and caught those flowers above the first row's heads like I was a wide receiver staying in bounds. My husband was in the ensemble of the show at the time and watched the whole thing. I definitely gave him a scare!

5. With Waitress ending its Broadway run, it will soon be available for license in schools and community theatres. What do you want actresses to know about playing Dawn?
My favorite part of Dawn is how much she wants to love and has so, so much love to give. Yeah, she is awkward, anxious, and terrified to open up, but if you trust that those are just her obstacles, and invest in the true love she finds with both Ogie AND her diner sisters, then you will find Dawn's journey and how she grows through the course of the play.

6. Tell us a memorable audition story.
It's gotta be my Waitress audition story. I was the reader for it and after a few rounds of helping in the auditions, Diane Paulus followed me out of the room at the end of a session day and asked, "Do you sing? Do you sing at all?" I said yes, that I had a folk-pop album. And the next thing I knew I was auditioning in front of producers and having a two-on-one work session with Sara Bareilles & Nadia DiGiallonardo, where Sara and I were trading off singing to each other's faces. I remember thinking, "Well if this ends here, I can die happy." And fortunately, it did not! I did the first national tour and moved to Broadway.

7. If we were to listen to only one song off your album, The Heart Is the Hunter, which do you suggest we start with and why?
Ooooh, maybe “Mercy Street”? Just because it is my personal favorite. I really enjoyed finding the soundscape for it. There are some crazy things like pipe noises in there!! But the title track "The Heart is the Hunter" is a great primer for the tone of the whole album—it's that heart of the album both sonically and as to what I was going through when I made the record.


8. Who is the artist that inspired you the most as a musician?
Oh this is a hard one! My first instinct is to say Peter Gabriel—his creativity inspires me to be bold and playful. But poetically, I am deeply influenced by Leonard Cohen. On the record I am currently writing, I am trying to channel how simply and perfectly he captured the essence of a thing.

9. You played Hamlet to acclaim at the Colorado Shakespeare Festival. Would you want to do Shakespeare here in New York? What Bard roles are on your bucket list?
HELL YES! I miss doing Shakespeare. I love his words. Can you tell there's a theme with me? ;) Heightened language is a JOY to play. I really love finding the intersection of heightened language with an accessible, conversational approach. Shakespeare's plays feel like they have never-ending depths to plumb. I approach Shakespeare with a very curious mind. I am itching to get back to my roots. Bard bucket roles: I'd LOVE to play Hal/Henry V!  Brutus or Mark Antony in Caesar! Elizabeth in RIII, Beatrice, Rosalind, Lady M. I mean, can I just play Hamlet again? Ha!

10. What was the last album you were obsessed with? What spoke to you about it?
Truly obsessed: probably a tie between High As Hope by Florence & The Machine (amazing on vinyl) and Belong by San Fermin. Florence's poetry is wild and vibrant and confessional and makes me feel free. Plus, her anthemic approach to pop is so satisfying to my little '80s-loving soul. Ellis Ludwig-Leone is on my "must collaborate with, I want to make a play out of his music" bucket list. Can I also say Phoebe Bridger's Stranger in the Alps is an alt-folk addiction of mine?