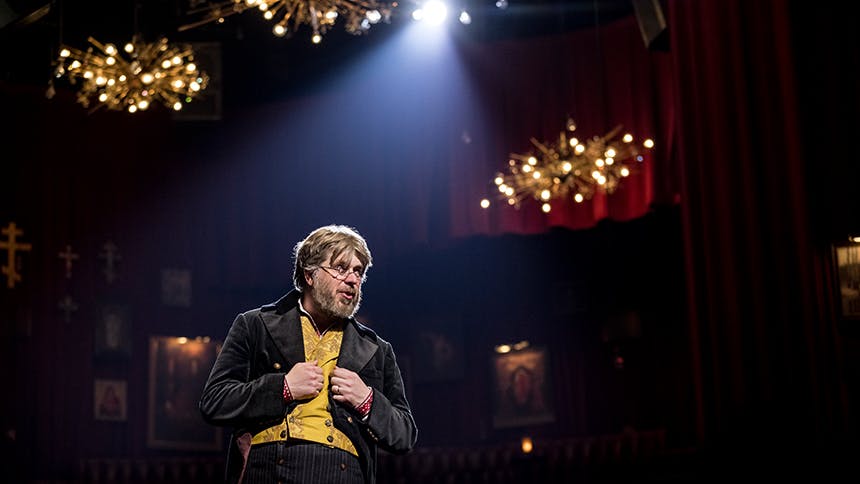 Dave Malloy is a three-time 2017 Tony Award nominee (Best Book of a Musical, Best Score, and Best Orchestrations In A Musical) for creating the most nominated show of the year, Natasha, Pierre, and the Great Comet of 1812

. Dave recently made his electrifying Broadway performing debut as Pierre (stepping in for Tony nominee Josh Groban), a role which Malloy created in The Great Comet’s original runs at Ars Nova and Kazino.


BroadwayBox caught up with Dave to talk about the journey to Broadway, observing Groban, and his massive next project, Moby Dick.

1. How have you changed your performance against Denee Benton’s Natasha as opposed to the way you played it off-Broadway?
I feel like it’s changed because of Denee but even more so because of Josh—watching what the two of them built. There is a moment in our last scene together where we come together for the first time and lock eyes with each other and stare at each other for a moment. Then Pierre sings the line, “Pierre grew confused.” And Denee’s face is so open, vulnerable, and expressive in that moment that I found myself, Dave Malloy, become so confused. I was just staring into her eyes. It was such a profound moment. Denee and I had not performed together until that night. All my rehearsals had been with understudies and ensemble members, so it was such a beautiful moment. That was the most magical thing for me—having such a pure, spontaneous experience like that. It just felt so honest.

2. Speaking of Josh Groban, was there anything you saw in his performance that you then incorporated into your Broadway Pierre?
Watching Josh in the role, he has such a beautiful, gentleness in him, and there’s this awkward, clumsiness in him that’s very endearing. There’s a teddy bearish quality that he brings to it that I was channeling as well. There’s a self-deprecating smile that he does that’s just heartbreaking. I found myself replicating that in a few moments. And, obviously, his voice too. He really showed me how to open up in those moments of enlightenment and have this kind of pure tone. Obviously, I’m not going to sound like Josh Groban but I’m trying to emulate that style a little more than I had in the past, for sure.

3. If you’re at home like Pierre drinking and reading, what are you reading and what are you drinking?
I’m definitely drinking whiskey—usually bourbon or scotch. Lately, because I’m working on a Moby Dick musical, I’m reading all this stuff about Moby Dick and the philosophy of Moby Dick—just a lot of research in that world. I’m also a big comic book nut so in my down time I'm reading a lot of Marvel Comics and Image Comics—Saga, Paper Girls, The Wicked + The Divine.

4. Can you tell me a bit about Moby Dick? What’s the structure? What’s it going to be like?
It’s a massive piece and Rachel Chavkin is helming that one again. It’s an extended duration piece. Right now, it’s four acts long and about a five-hour show. It’s really inspired by these epic durational pieces—like Elevator Repair Service’s Gatz or Einstein on the Beach—where you really feel like you form such a community with the audience. For Moby Dick, we want the audience to form a community as the crew of the Pequod, as members of the boat going on this epic journey together. With Moby Dick, duration and a sense of boredom have to be part of the story.

It’s four acts and each act is kind of its own style. The first act is very much in the style of a proper, Broadway musical. The second act is more of a vaudeville and it has all the whaling chapters. The third act radically deconstructs the form with a jazz song cycle about a small character in the book Pip, who is an African American boy on the ship who gets stranded in the ocean and goes insane. So, it’s just a meditation on that one character. Then in the fourth act, all hell breaks loose.

5. Comet went from Ars Nova to the most Tony nominated show of the year. Was there ever a moment you doubted the show’s path to Broadway?
Oh, I doubted every step—so many improbable things had to happen for us to get to this place. There were so many times that I thought, “No way our producers will continue to say yes.” But we were blessed with the incredible producers Howard and Janet Kagan and Paula Marie Black, and of course Ars Nova, and the American Repertory Theatre as well. All of them had a vision. They would say yes to everything we said and then challenge us and push us to go further. They said, “Don’t give up on the idea of an immersive theatre. We don’t want to put this in a proscenium. We want to figure out how we could do this, so make an insane set and we will figure out how to do it.” That’s exactly what Mimi [Lien] did. One thing I’m also glad about too on the journey is that we did do it in small steps. I think if we went straight from Ars Nova to the Imperial, we wouldn’t have known how to do it yet; but we had all these intermediary steps where the show kind of doubled in size each time. That was amazing. To have the time to figure things out and figure out how to make it bigger and how to have an ensemble and add choreography and adding roving musicians—all these steps along the way have turned it into what it is now.

Natasha, Pierre & The Great Comet of 1812
Best Priced Tickets
Newer
12 Videos That Are So BEYOND, They Need to Be Studied, Discussed, & Then Played on Repeat
Older
Introduce Yourself(ie): 10 Questions with The Little Foxes Star Michael Benz