12 Videos That Are So BEYOND, They Need to Be Studied, Discussed, & Then Played on Repeat 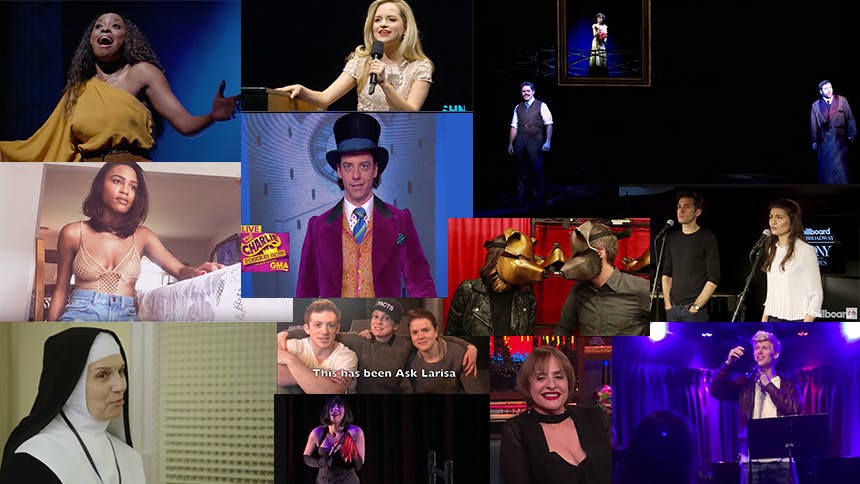 It’s been a hot minute since we did a proper video roundup—I blame Tony season and our awesome photo series—but now it’s time to dive in head first and catch our lives in these killer clips.


Ultimate 🙌 🙌 moment: Girl, just listen straight through…twice. I would practically walk to Chicago to get the chance to see Ron Kellum’s all black production of Jesus Christ Superstar running at Paramount Theatre through May 28. I can only hope it makes its way east. Also click here for more numbers from the show.

Viva La LuPone, Queen of Shade, Long May She Reign


Ultimate 🙌 🙌 moment: OG Eva, Norma, & Fantine, Patti LuPone dropped by WWHL to throw some grade A shade at Madonna in Evita, ALW & Sunset, and the Les Miz movie. She also shared what she told Hillary Clinton after War Paint.

Brennyn Lark Goes from “On My Own” to “I Have Nothing”


Ultimate 🙌 🙌 moment: One of our favorite Eponines ever is back on the interwebs serving all the Whitney realness. This voice does not quit (:55-1:22) Please hurry back to B’way, Ms. Lark!


Ultimate 🙌 🙌 moment: This Great Comet Tony nominee sings the house down at the Imperial, but my god what he did with the Hedwig and the Angry Inch finale at The Green Room concert was next level. Have you ever heard 3:55-4:07 sung like that?! Then that final note… Is it too soon for another revival? I’ll launch the kickstarter.

Enjoy a Taste of Charlie on GMA

Ultimate 🙌 🙌 moment: This charming medley from the new musical adaptation Charlie and Chocolate Factory was a smart choice. You give them a bit of "Golden Ticket" and then Borle doing what Borle does best. Also, I live for those adults as the kids—they all serve such face, always.

Move Over Sister Act, It’s the Dawn of Nunsense


Ultimate 🙌 🙌 moment: Broadway legends abound in the new online TV series Nunsense. The trailer had me LOL, and I seriously can’t wait for more!


Ultimate 🙌 🙌 moment: The vocals in the Broadway-aimed Secret Garden are lit AF. 🔥 Hello :35 seconds in! The production already ended its Seattle run but fingers crossed there's more life in this garden.


Ultimate 🙌 🙌 moment: Larisa Oleynik (who gave us life in The Secret World of Alex Mack & 10 Things I Hate About You) is currently off-Broadway in the acclaimed new musical Baghdaddy, and she did a fun Twitter Q&A (like how to own your spinsterhood) to let the fans know that she’s in the house. It’s pretty fab.

The Opera At BAM Is Getting Kinky


Ultimate 🙌 🙌 moment: Brooklyn Academy of Music hosts the New York premiere of the comic opera triptych Three Way (with a  libretto by B’way’s own David Cote) in June. It’s billed as Sex and the City meets Black Mirror, an opera for millennials, first-time attendees, and opera fans looking for something fresh—and I agree 100%. This fierce number “Pain and Release” is performed by Eliza Bonet as Mistress Salome the Domme.

Get a Glimpse of the Broadway-Bound Roman Holiday Musical


Ultimate 🙌 🙌 moment: Ok, Stephanie Styles, I see you. The leading lady of the musical adaptation of Roman Holiday sings Cole Porter’s “Use Your Imagination”, and it’s pure heaven.

Bears Are the Mascot of Great Comet According to Paloma Young


Ultimate 🙌 🙌 moment: 2017 Tony nominee (and previous Tony winner) Paloma Young walks you through the secrets of her Great Comet costumes and it’s EVERYTHING. Rosie O nails the description at 1:38.


Ultimate 🙌 🙌 moment: I LOVE “Times Are Hard for Dreamers” (1:23 ), and I loved hearing Daniel Messé and Nathan Tysen talk about creating it. Also, thank you Billboard for this series. I’m seriously obsessed with each.