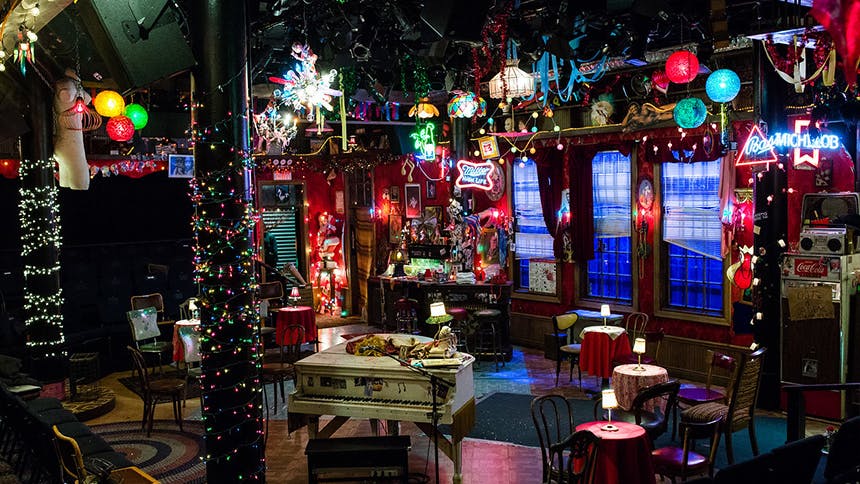 Jason Sherwood received a 2017 Dram Desk Award nomination for his incredible work designing the set of the new off-Broadway musical The View UpStairs. Set inside New Orleans' historic UpStairs Lounge, the show brings audiences right into the action thanks to Jason's immersive set that transforms the Lynn Redgrave Theatre. It's nearly impossible to take in all the wonderful detail in the room so photographer Caitlin McNaney went downtown to capture some of our favorite aspects of the set. Then the oh-so-charming Jason spilled the good tea about why or how each piece ended up there. 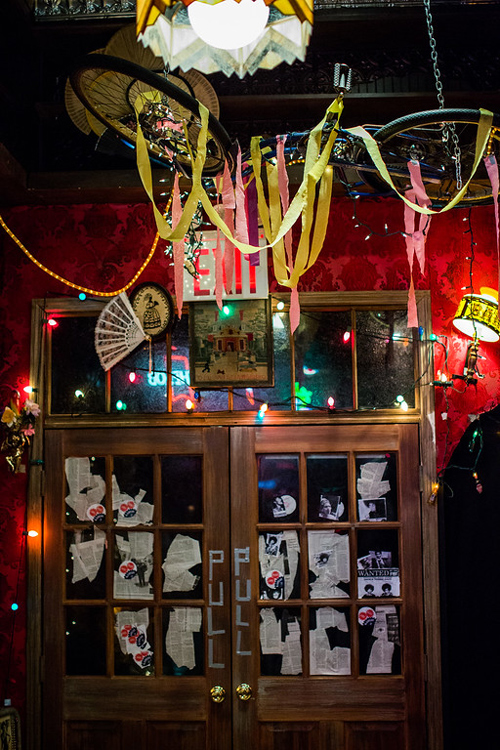 For the entrance doors, I really wanted there to be a sense of mystery. This was a safe haven at a time where being a gay person (especially in the South) was really dangerous. The windows to the space would have been obscured. Then the bicycle was honestly about creating an overwhelming sense when you first walk in. You immediately know you’re in a real space but also a space where the rules of how objects are used is somewhat different. It makes you want to look up and around and everywhere. Everything is treated and there’s a gem everywhere; I wanted to give that sense right when you arrive. 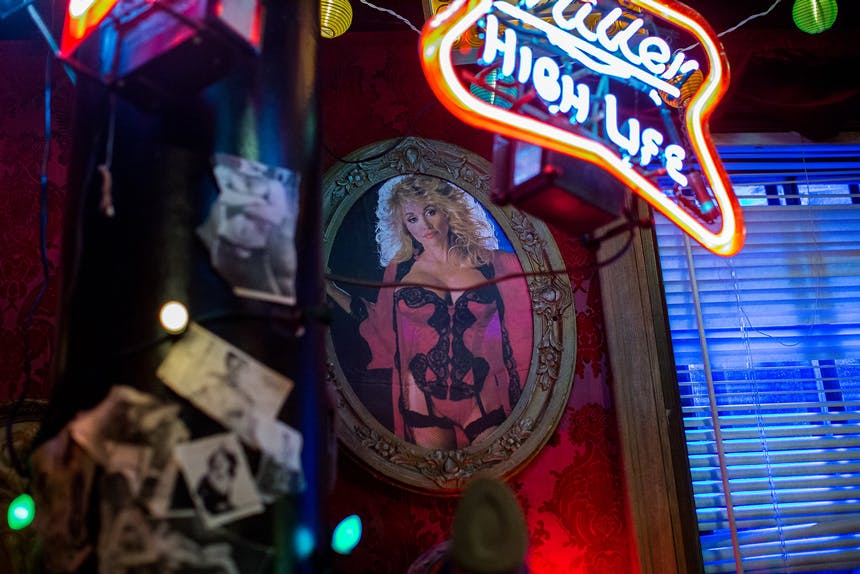 
She’s a little hidden behind some neon signage but Dolly is one of our favorite divas, and this sultry shot just had to be framed. Because we didn’t have a lot of historical research of what exactly the UpStairs Lounge looked like, part of my idea for the room was to create a space that would celebrate queer history, gay icons, and people in this time period—a time capsule. We are in 1973 and it’s all about tactual, hands on connective experience. 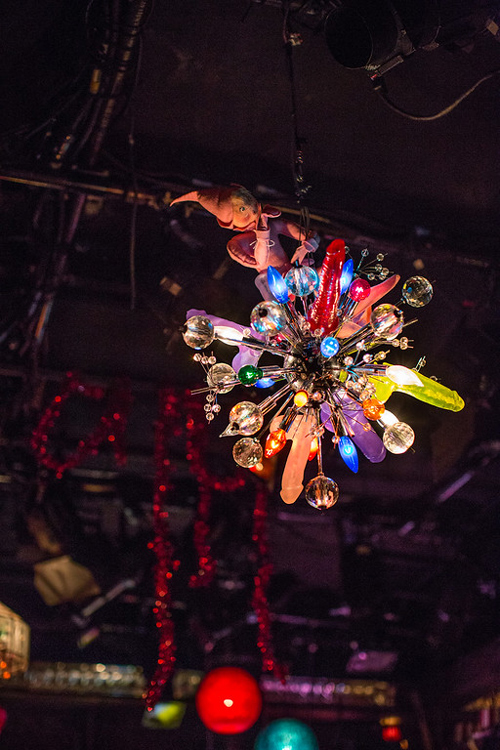 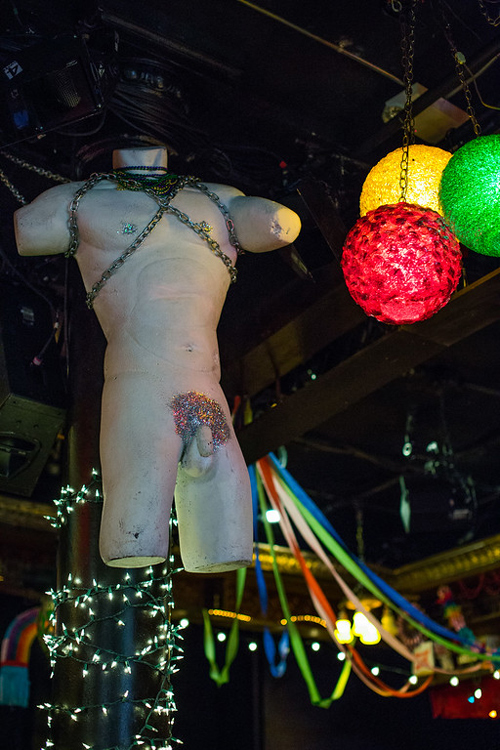 We call him My Future Ex Husband. There’s also a blue female mannequin in the room. I was attracted to the idea of putting traditionally perfect male and female forms into the space and then kind of turning them on their heads. Though, I never thought in my professional life I’d use the term “glitter pubes” in an email but I did more than once. 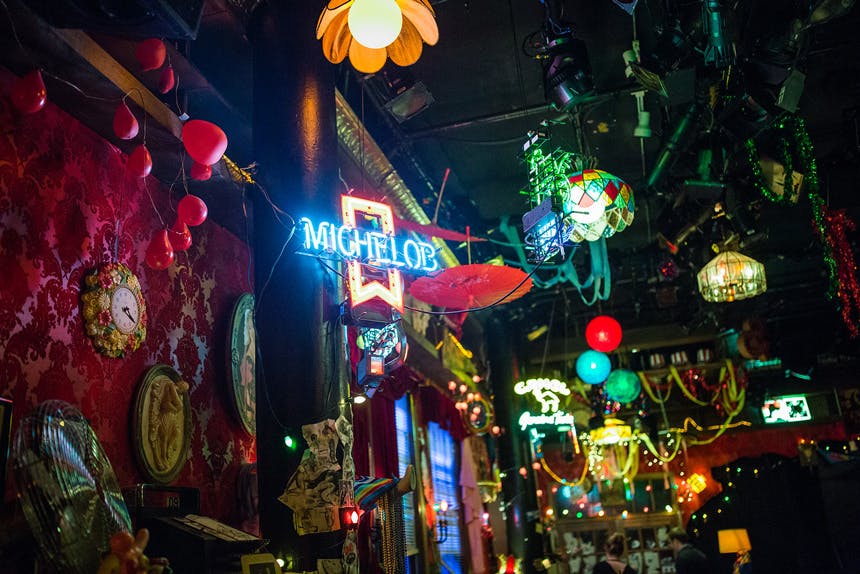 
I knew we couldn’t put a ceiling over the entire space and I really wanted to use hanging lights and streamers and a bike and mannequins and neon signs and frames to help create an intimacy and a sense of being inside an enclosure, a haven, a womb. This image is really inspired by a West Village gay bar called The Cubby Hole. The lighting designer is a good buddy of mine and a wonderful colleague, Brian Tovar, and I knew if I gave him hundreds and hundreds of practical lighting elements to play with he would light the hell out of it—and he really did. 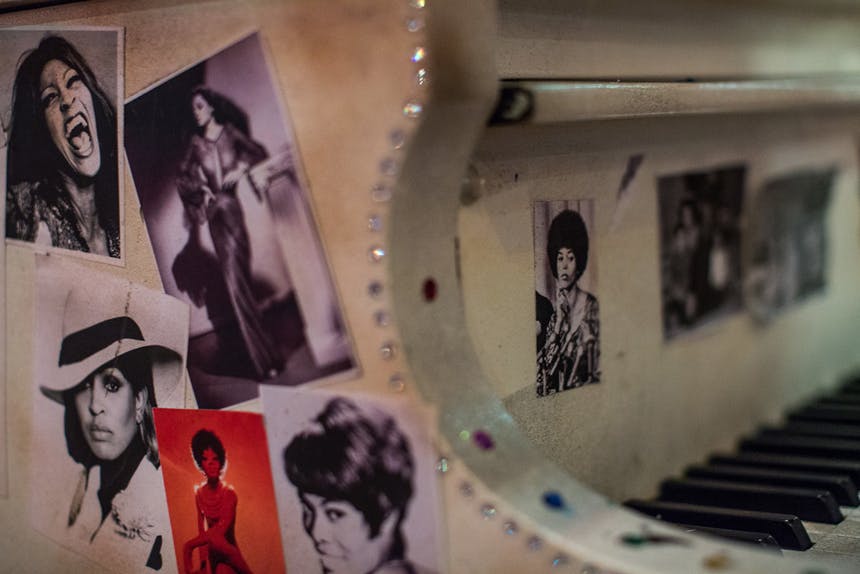 
The piano is home base and we want it to be a shrine to our music divas. We had a big brainstorm based on research but also spoke to the cast a lot about who they were interested in having there. The piano is really a family piece. There are photos of my parents at the piano and photos of Randy Redd’s aunt. We really wanted it to be a piece that would celebrate our favorite people. 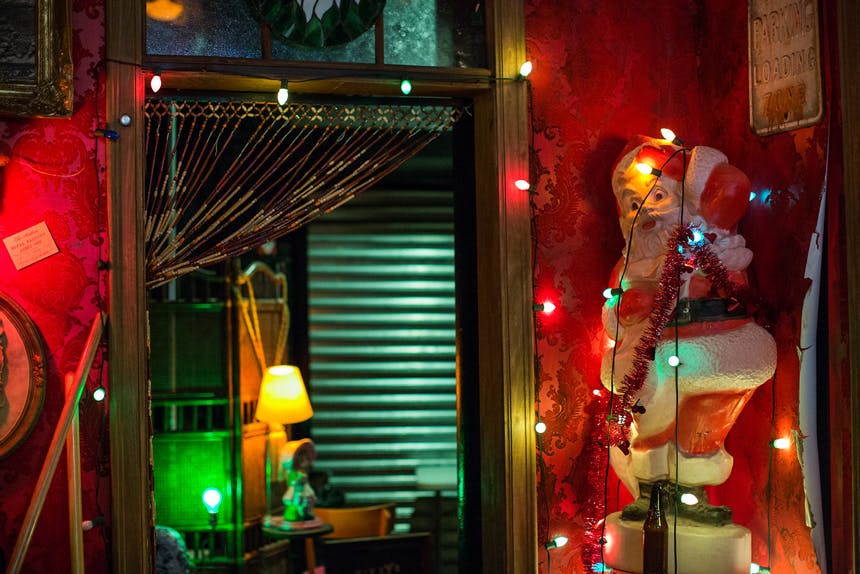 
We wanted to make sure when people went over to the bathroom they were still in the bar. There’s a little sign there that says “Mikey’s glory hole” with an arrow, and that’s an homage to my boyfriend—chivalry is not dead. We changed all the lightbulbs and made them red. We just wanted to make it feel divey and dirty. Also, the Santa has a sassy hip pop which we love. This is a space about celebration; they don’t have traditional families so they come to this space to celebrate all the different holidays and the decorations remain as remnants. 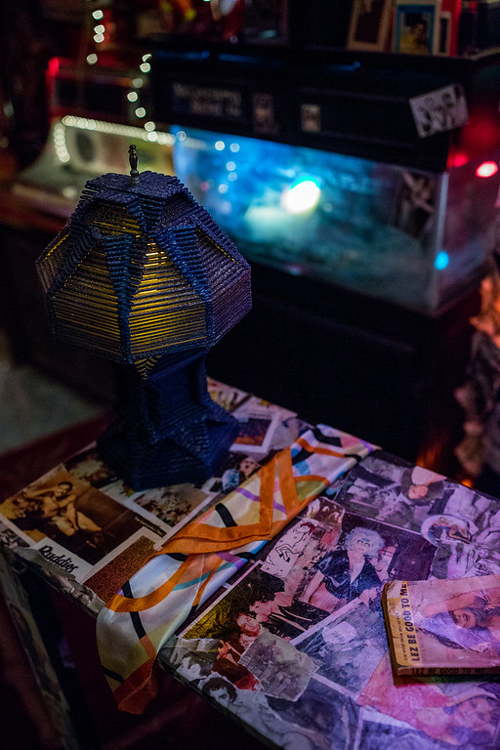 My original design idea is that they moved into this space to create this bar but it had been something else previously, so there were a lot of things that were left over. So, when there is something ugly that you don’t like, you do the cheapest thing you can, which is magazine clippings. The bar is one of my favorite spots. It’s one of the very few research images we have from the actual UpStairs Lounge. Sitting on the bar is a crazy blue popsicle lamp we spray painted and this paperback book Lez Be Good to Me, which is a lesbian pulp paperback book which the character of Henri (Frenchie Davis) is reading—and Frenchie actual read it during her off moments in the play. 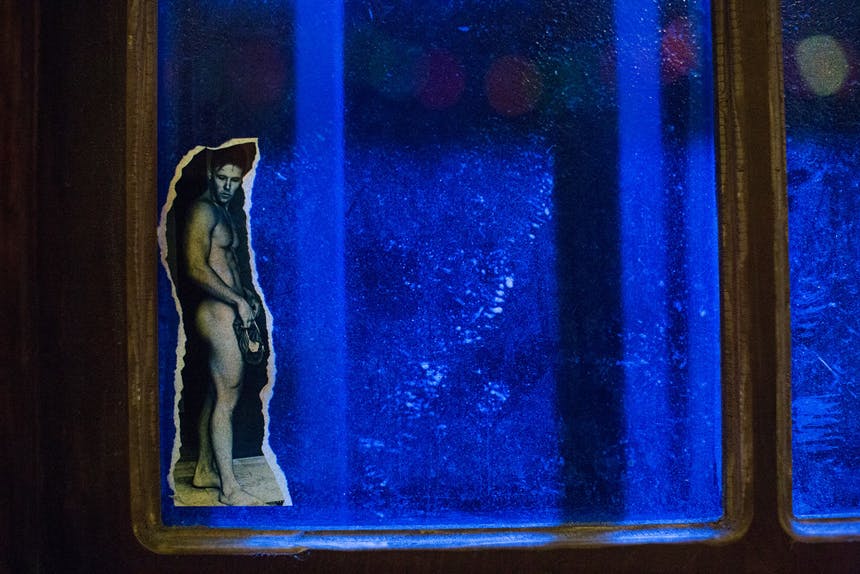 
I asked every actor and member of the team to bring something personal to the space. It’s a gay bar but it’s a community hub and home for all these people and I wanted it to feel personal. Taylor [Frey] didn’t know what to bring at the start and then I started putting up all these cool black and white nudes and Tom of Finland photographs. He said, “I have these photographs of myself I can bring them in, and we can black and white them and make them feel vintage.” I thought it was a great idea. It seems like something his character would have done anyway…and he looks fantastic, so why not?! 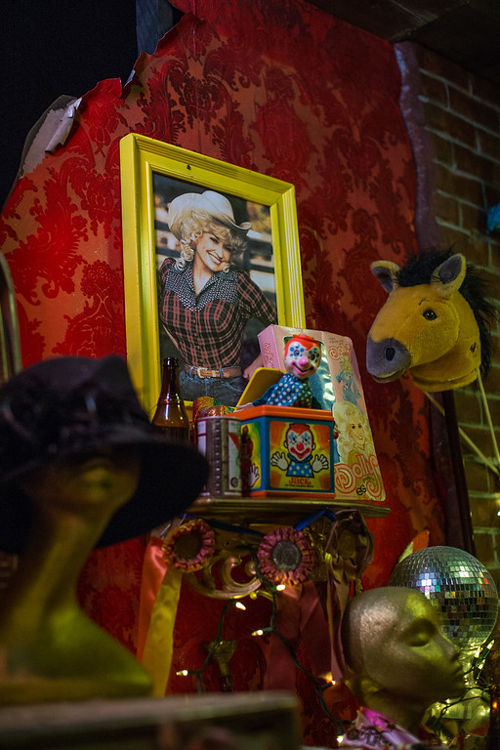 Now it’s conservative Dolly. I love this image. It’s a lot about what I wanted to create about the space: there’s a strange, kind of hilarious picture inside a weird found frame against this bizarre red wallpaper. The whole thing is adorned with this gay glitter explosive of my and the creative team’s imagination. 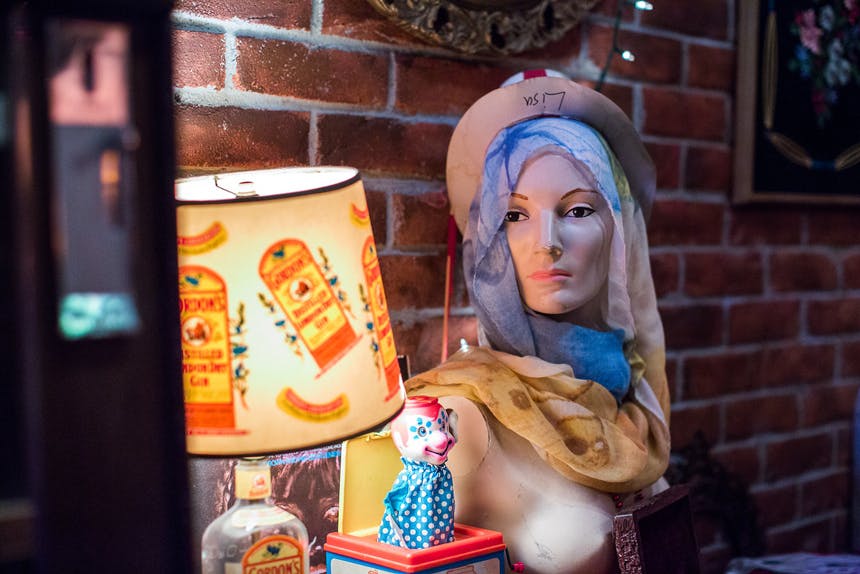 
We love a headscarf at the UpStairs Lounge! And I’ve really never seen a mannequin head deliver quite this much shade in a single, frozen glance…so we had to include her. She tells a story. She’s the 14th cast member; her name is Siobhan. 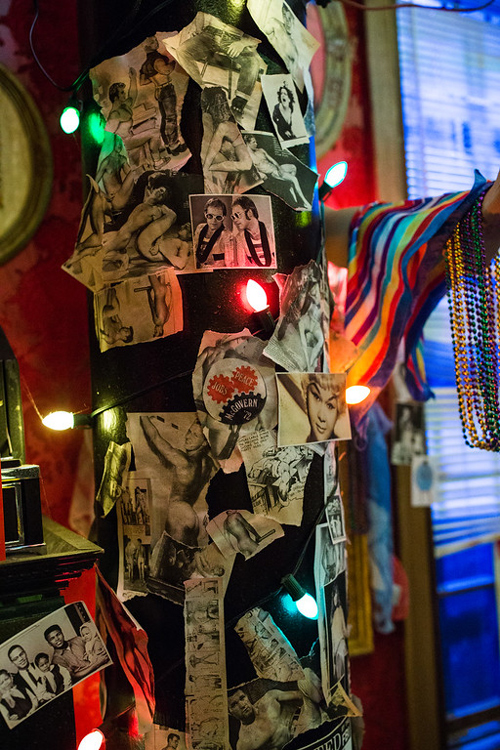 It’s divas, it’s Tom of Finland, it’s queer photography, and then string lights galore. I love this mannequin leg we found who got mounted to the wall with a bunch of Mardi Gras beads on the wall. 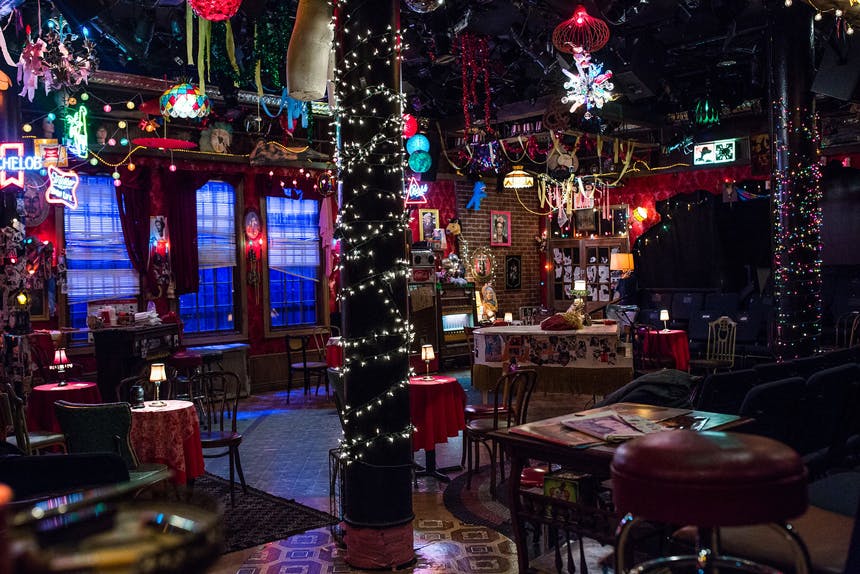 
The whole architecture of the space was built by a scene shop and then painted and wallpapered and layered over with all this dressing. A bunch of things were purchased things that we then sort of aged into the world. A lot of things were created by us and then printed and brought into the space. There were a bunch of signature thrifted pieces. We knew what we wanted to spend our money on—the cigarette and soda machine and the vintage jukebox in the space. Then some other pieces, like the piano, were found—we found an old, hallowed out piano, painted it white, bedazzled it, and made it feel very 60s/70s. It’s 30% created by us, 30% purchased and brought into the world and 30% thrifted, and 10% gay god given. 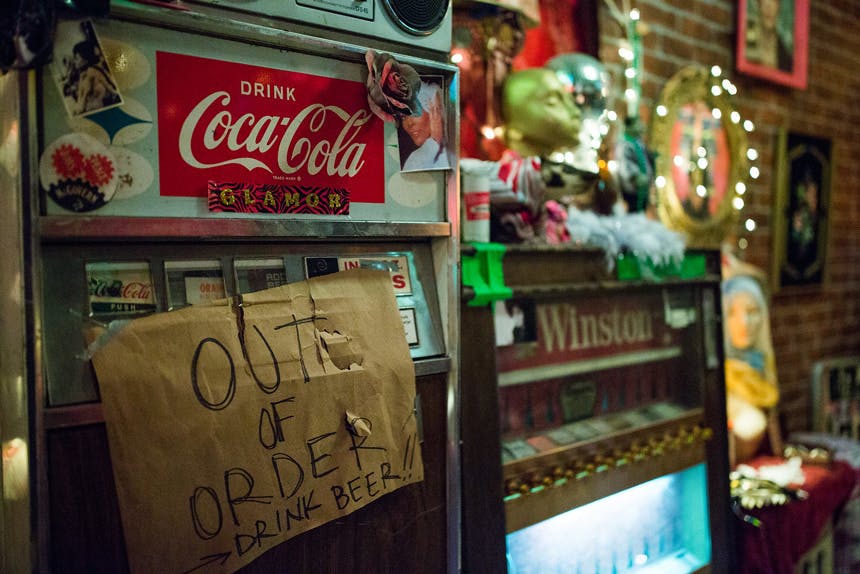 
Who needs to have a Coca-Cola when you can have a 10-cent beer? So, we made it out of order (and we couldn’t figure out a way to make it light up because it was busted). This is a great example that every single surface of this room is stickered, beglittered, or graffitied. It says Coca-Cola glamour right underneath. This vintage pieces are a big part of what takes us back to 1973. 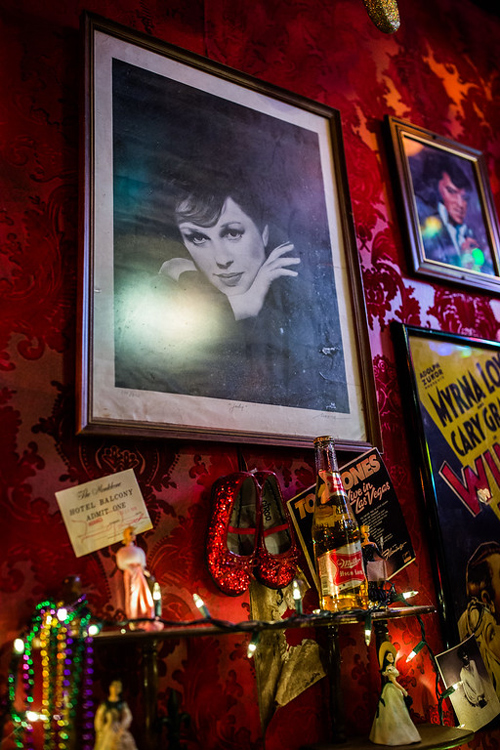 This is one of our favorite spots in the bar. The worst part of this is the weird ruby red slipper with a kitten heel, but they were too good to resist. And the looming Elvis.


We found this fish tank on Craigslist and I absolutely insisted that we buy it, but we weren’t allowed to fill it with water or actual fish. So, I made a strange gay cowboy diorama inside of it with a sign that said, “Rest in peace Judy and Liza” for the two dead fish. 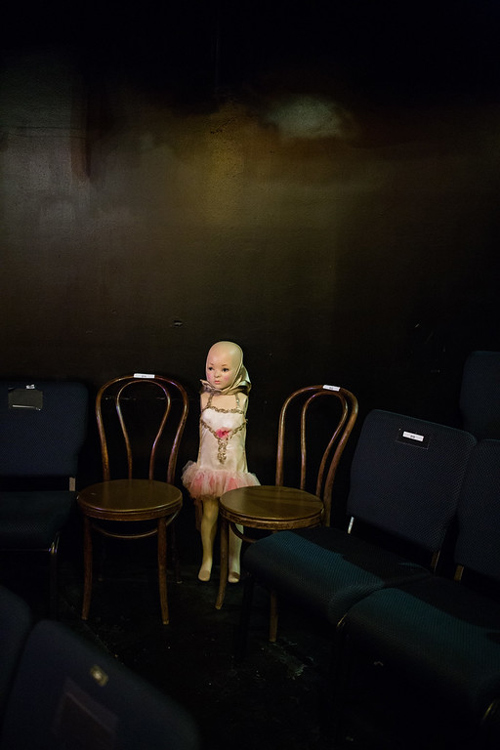 We call her Little Orphan Eddie, and everyone tried to cut her but I insisted that she remain. She just sits there alone next to a bunch of audiences’ chairs. She’s the chaperone. She’s all over Instagram. 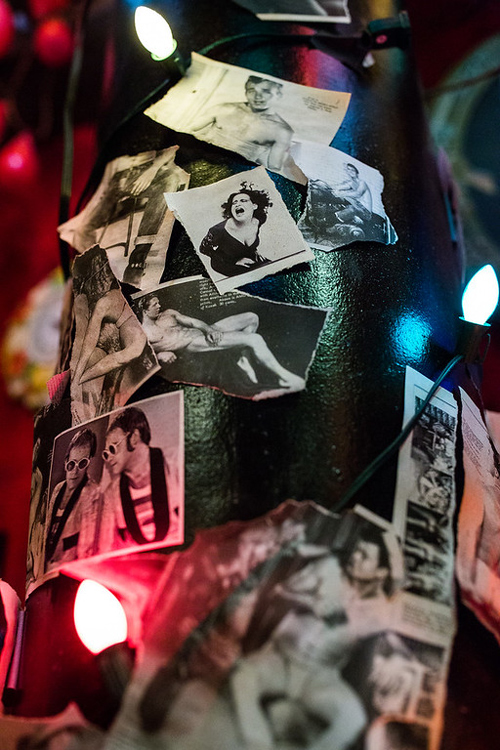 The bar is owned and run by Henrietta (Henri), who is played by Frenchie Davis. She’s African American and a butch dyke so there’s a lot of civil rights iconography in there. There’s a lot of Malcom X and Coretta Scott King and we wanted to make sure the bar had that identity as well. 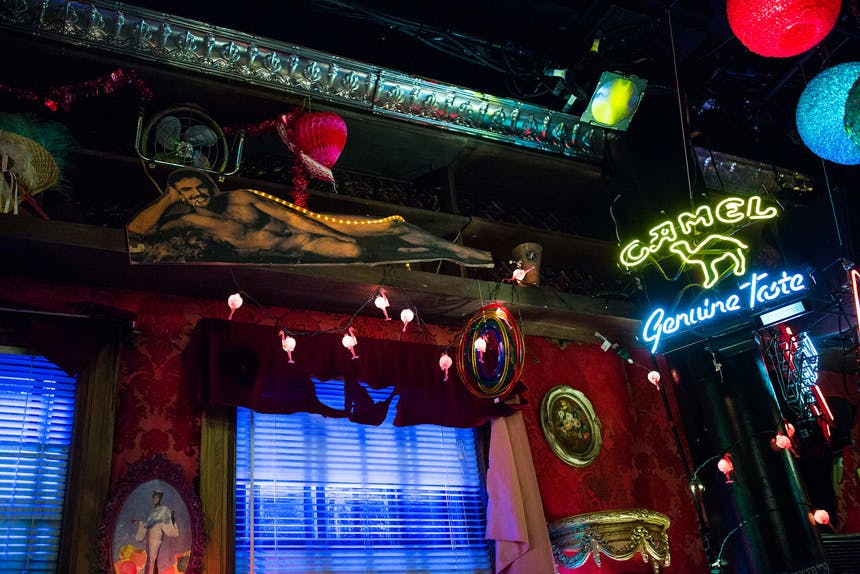 
Burt is mentioned in the play. We found that original image, and we did a print to recreate it. He looks fantastic. Why not? 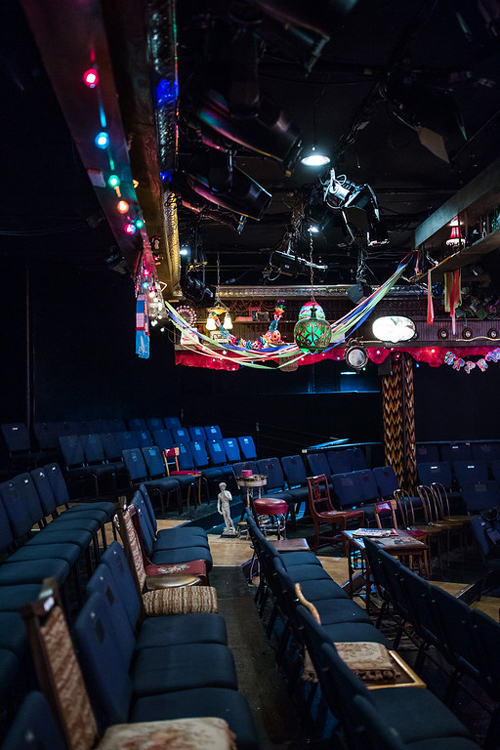 The show is immersive in the sense that it surrounds you but we don’t necessarily seat everybody at a bar stool. We wanted to create a variety of experiences. I really wanted the space to feel like it envelopes people so it extends really far out. There’s this header that wraps around and gives the whole space a big visual hug. 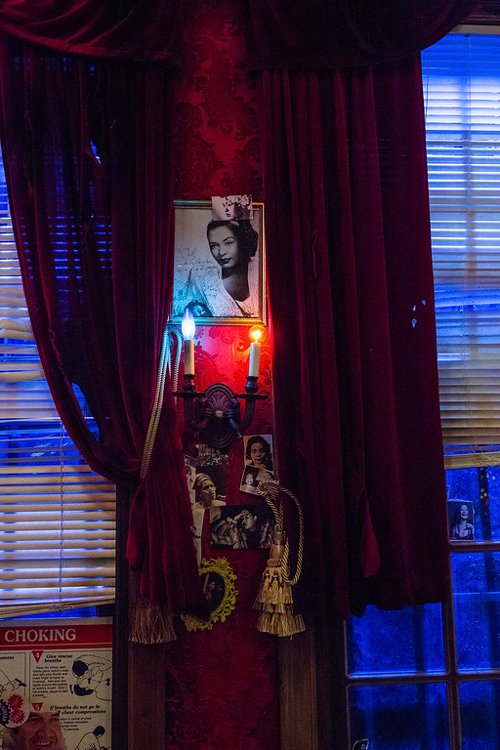 The three windows in the space are what we found in the research images. When you look up the UpStairs fire, you see these exterior shots of the building and these signature windows. Then there are bars on the window, which played tragically and famously into what happened the night of the fire. One man got caught in the bars and burned to death, stuck between the bars that night. Part of creating a safe space is creating what’s beyond it, so we had these three portals to the outside world. 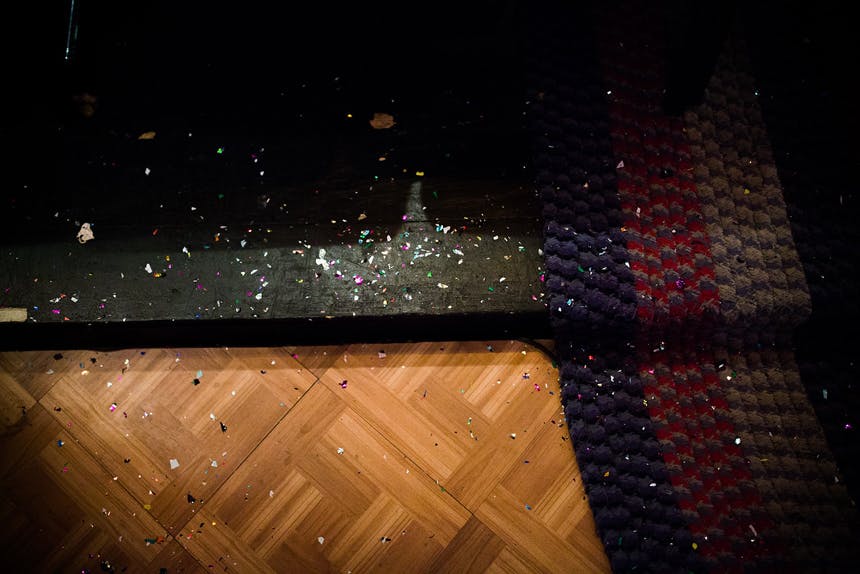 
I had this idea that the space would be a hodgepodge and mismatch, so I wanted to use different cheap parquet and tile and these weird, crunchy 60s/70s patterned rugs. Then I insisted on the glitter. I was sprinkling it around during previews because I wanted it embedded into the carpet. I used to joke I was going to run around with a spray can of PBR and make the bar smell like beer—and I’m not denying that I did that and I’m not confirming it either. 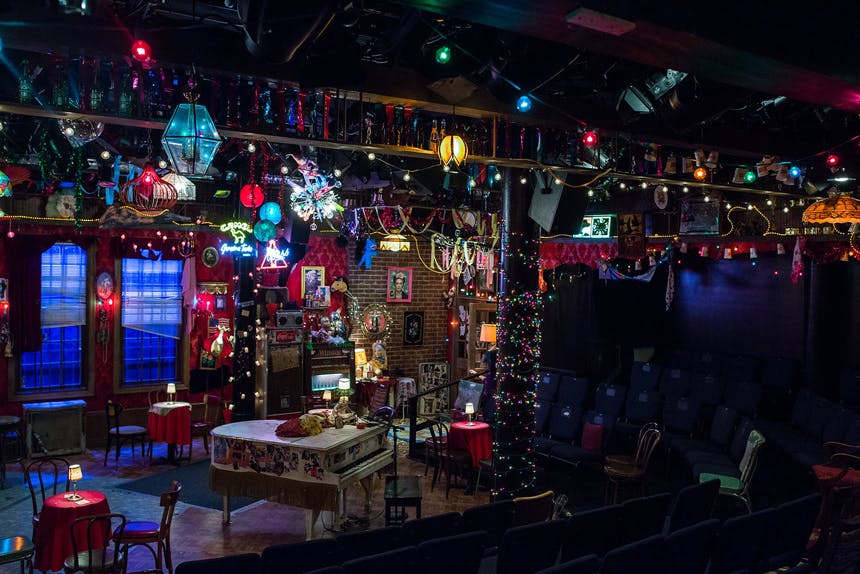 
I was designing this play in the fall, both before and after the election, and knowing that I was getting to make a space that was reflective of different kinds and colors and types and origins of people was a very meaningful thing for me. I was collaborating with friends and fellow artists to create a safe space for queer people. It felt, in a heady way, like a remedy for the turmoil we’re facing in the news every day. You can escape into a place that celebrates the weird individuality of being a queer person or an immigrant or a person of color on the United States.

You have to experience Jason Sherwood's set IRL so you only have until May 21 to see 'The View UpStairs' at off-Broadway's Lynn Redgrave Theater.