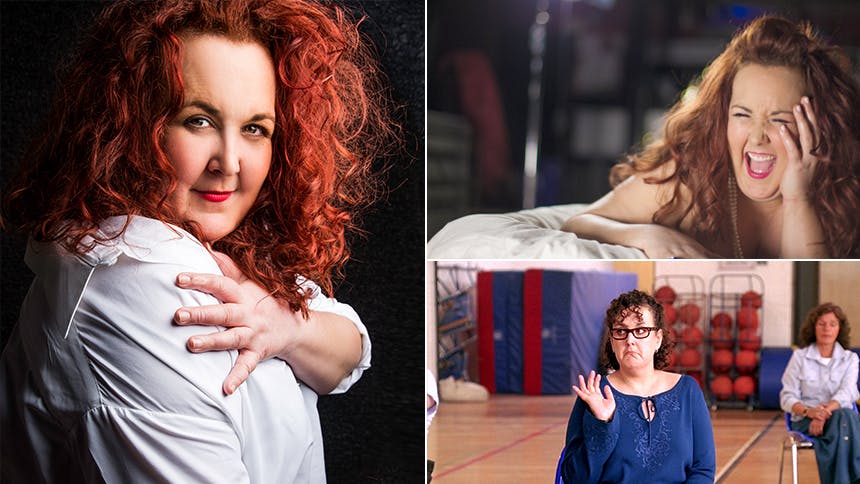 The award-winning “Redheaded Canadian Goddess of Cabaret”, Sharron Matthews (who millennials know as Joan the Secretary from Mean Girls) returns to Feinstein's/54 Below on May 26 with her acclaimed new show Girl Crush.


Scroll on as Sharron talks bringing cabaret to Canada, Mean Girls memories, and badass women who inspire her.

1. What’s the most memorable thing Elaine Stritch said to you during the two days you spent together at the Carlyle?
MOST MEMORABLE THING ELAINE SAID TO ME DURING THAT TIME AT THE CARLYLE (In reference to the fact that I wanted to pursue cabaret as my career but I was whining that, at the time, Canada had no cabaret venues, cabaret audiences, or cabaret understanding): "Just f**king do it anyway."

RUNNER UP MOST MEMORABLE THING ELAINE SAID TO ME DURING THAT TIME AT THE CARLYLYE (In reference to her show, which I just just seen in the room at the Carlyle, after which we came up to her hotel room and I sat beside her bed and watched her eat grilled vegetables in her white v-neck t, ankle socks, and oversized glasses): "So, you are going to a musical call back tomorrow? For what? Oh, just tell them that you are staying with me. Tell them Elaine said HI. No, I don't know them but it can't hurt."

2. What makes a great cabaret show? When do you feel like you nailed it?
I believe that a good cabaret is made by well thought out musical choices, true stories to connect them, and a heartfelt and honest connection to audience...AND the ability to roll with the audience that shows up on any given night. They can be so diverse and what they want really changes from one performance to another. You have to be ready to change tact on a dime.
AND I feel like I have nailed it when people smile at me like we have a shared secret...whether it be a song that we both know or a story that is also "their" story. You can see it...it is a very special smile.


3. Who’s your girl crush? Who inspires the hell out of you?
My biggest GIRL CRUSH: My big sister, Gwen, No matter what happens in her life (and some challenging stuff has happened) she always finds a reason to smile, laugh, and be positive. I have no idea how she does it but it inspires me to make more uplifting and positive choices.
My biggest GIRL CRUSH RUNNER UP: Um...Beyoncé, of course.
Women like Gaga and Madonna (and the women above) at the very top of their game who work their behinds off to do what they love..they inspire me.

4. Which female voice did you grew up singing along to most?
GOD, I LOVE A GOOD QUESTION! When I was growing up my "everything" was Cher. I loved watching her TV show. A TV show she kept as a solo show after SONNY departed. Yes, mama. I loved her outfits AND I loved all of her songs!! She seemed in charge, sassy and strong and her voice was so different than other voices that were top of the charts at the time...it was deeper and warmer. I bought her 45's and sang along till I knew all the words. She was a V...A...M...P...


5. Most memorable moment on the Mean Girls set?
The day we shot the scene (that has turned into a GIF and MEME that has gone around the world literally millions of times) the hand raise was not in the script or suggested by the director. I know it is not fancy, it is quite simple really, but we had been sitting there forever and when Tina Fey said, "Who here has ever been called a slut?" I just put up my hand. The director yelled, "CUT" and Tina turned back at me...with my hand still in the air...and laughed. The director yelled, "Put a camera on Sharron...Joan the Secretary..." and I felt like more than a million bucks. I love it when stuff like that works out.
And NOW? That shot goes around the world and I make not a cent. Life is funny.


6. What’s one moment you hope to see in the upcoming Mean Girls musical?
I still cannot believe that it is being made into a musical...but it actually makes perfect sense, with shows like Legally Blonde doing so well. Overall I hope that the musical keeps the edge that the movie has...that is what the younger generations love about it. AND not to be too self-centered, but I hope that that friggen HAND RAISE makes it. Now, THAT would be amazing.

7. What would you tell young women who want to have a ‘girl crush’ on themselves?
Don't wait to crush on yourself till you lose weight, do that thing you always wanted to do, cut your hair, till your acne clears up...do it now. Love yourself now. Don't waste any precious time wishing you were anyone else. This is what you got...work with it...and celebrate it!

Don't miss Sharron Matthews in Girl Crush at Feinstein's/54 Below on May 26th.