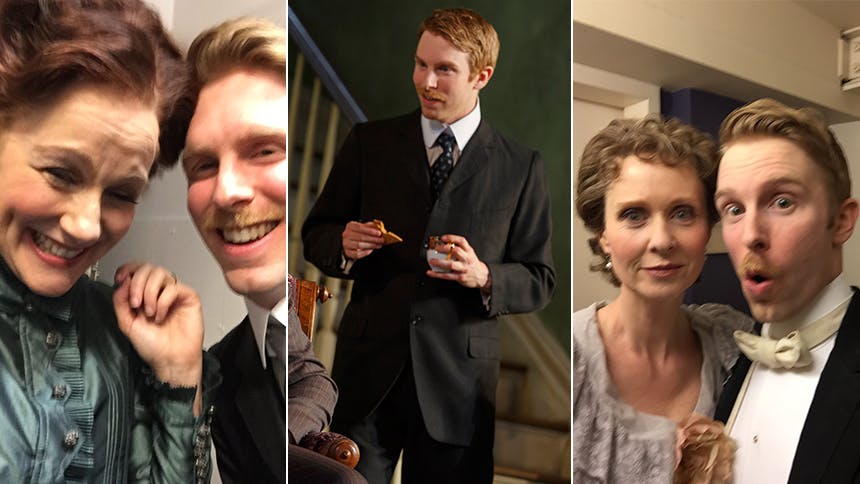 . As a child, he starred in the popular British sci-fi TV sitcom Mike and Angelo; he's appeared in several Shakespeare productions at the Globe, the RSC, and the West End, including the title role in Hamlet. Below, Michael talks to BroadwayBox about a memorable Shakespeare audition with Mark Rylance, getting scolded by Maggie Smith, and making his Broadway debut in The Little Foxes.

1. My favorite thing about playing Leo:
Getting to mess about with this group of actors on stage every night. I love them. Oh, also my horrible little mustache. That’s my absolute favorite thing.

2. Before a performance of The Little Foxes, I typically:
After spending half my wages at Pret a Manger, I typically warm-up on stage.

3. I perfected my Southern Accent thanks to:
Deb Hecht, our brilliant accent coach. She is THE BEST, and a wonderful person. I was raised in the UK by American parents but my natural accent is more American than English, especially since living in NYC...but getting Alabama just right took some extra effort.

4. Biggest difference between starring on West End and Broadway:
There’s a difference, but I’m still trying to figure out exactly what that is. But in short: Broadway audiences are warmer. They seem to come in expecting to have a good time, while West End audiences feel a little trepidatious…as if they’re saying, “Go on, prove to us that you’re good.” But honestly, audiences are audiences the world round—if the material and the show is good, they have a good time. Oh also, standing ovations are rarer in the UK…as are entrance applauses. Also, Broadway audiences whoop more…a LOT more.

5. Shakespeare role I’d like to do in New York:
I think Richard II. I’d love a good crack at that. And I’ve always had my eye on Edgar in King Lear and Angelo in Measure For Measure. I’m rarely cast as the “bad guy” in Shakespeare…so that would be fun. And maybe Hamlet, again, someday! Also, I've never done Shakespeare in an American accent so that would be interesting.

6. One thing being a child actor on TV taught me:
It was a long time ago, but my fondest memory is how everyone brought a sense of fun to what they were doing. There was an important task at hand, but at the end of the day, we’re all dressed up in costumes pretending to be other people, just like when we were kids. And everyone treated each other with an enormous amount of respect. Every now and then you’d see an adult act more like a petulant child…and that kinda ruined everything. So I think my biggest lesson was to treat people with respect and always be fun and kind. The industry is tough enough as it is…the very least we can do is not be jerks.

7. My best Downton Abbey set story:
My first day of shooting was the hottest day of the year and it was a picnic scene with Maggie Smith, Shirley MacLaine, and Paul Giamatti. It was so hot I nearly fainted. Then I remembered Maggie and Shirley are in their eighties in corsets and hats and that I was being a wimp.

A couple weeks later Maggie Smith scolded me on set; I was goofing off with Paul Giamatti…we were joking and laughing about something stupid and she was in my sightline and she looked right at me and said “SHHHH, boy!”. I went stone cold quiet…but Paul didn’t hear or see so continued on.

Oh also, a few weeks after that I walked in on a half-dressed Michelle Dockery (Lady Mary)…our trailers were right next to each other…our names start with the same letters, etc…I made a mistake and walked in on her half naked. She thought it was hilarious and laughed it off, but I was mortified and so apologetic. But she was fine with it. It could have been worse…at least it wasn’t Maggie Smith.

8. My most memorable audition story:
One time I auditioned for Richard III for the part of Duchess of York, Richard’s mother…it was with Mark Rylance in London at the Globe, and we did the scene where the Duchess confronts Richard and curses him. After we did it, the director wanted Mark and I to improvise the scene a bit. Mark was great at it, trying to help me along, but I was stumped and stumbling. At one point Mark improvised something like, “You made me the way I am, mother. You brought me into this world” and I screamed in his face at the top of my lungs, “I FUCKING WISH YOU’D NEVER COME OUT OF ME!!!” So…that was surreal. And memorable. I didn’t get the job.

9. I was inspired to pursue a psychology degree from Georgetown because:
Despite being an actor from of the age of 10, I didn’t know what I wanted to do as a “grown-up.” So I wanted to go to college and study anything and everything, but not acting. And because I felt half American I wanted to try living in the US. I tried lots of different things, and psychology felt like a good fit. After I graduated from Georgetown I moved back to London to train at RADA.

10. The biggest challenge I’ve faced as a performer and the way I overcame it:
Not knowing when/what the next job is going to be is sometimes frustrating…the “not knowing.” But the way to overcome it is to lean into it…it’s exciting, and if I’ve learned anything from this industry, it’s that you never know what’s around the corner and who you’re going to meet.

Don't miss Michael Benz's Broadway debut as Leo in 'The Little Foxes' at the Samuel J. Friedman Theatre through July 2.