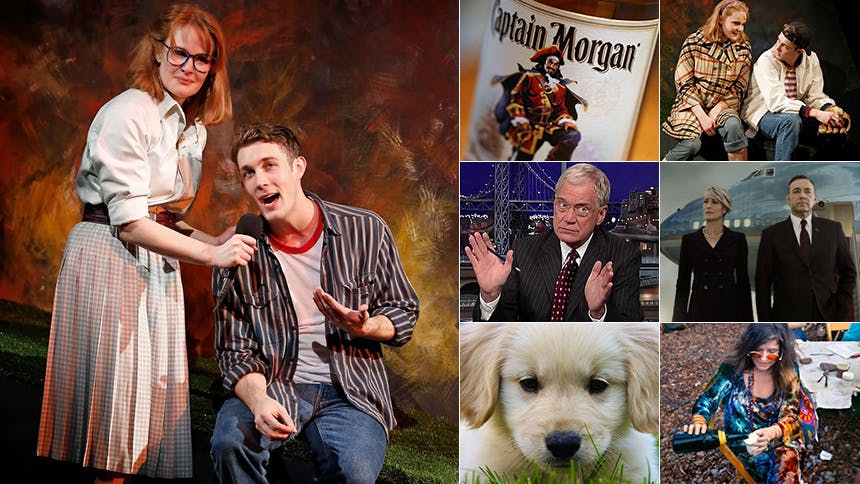 Watch out world for Conor Ryan. He’s a recent grad from University of Michigan (2014) who has already appeared in Broadway’s Cinderella and off-Broadway’s Fortress of Solitude, and now he’s having his breakout moment in the Keen Company’s acclaimed revival of Andrew Lippa’s emotional and satisfying two-hander John and Jen. The musical spans from 1952-1990 and Ryan stars first as Jen’s (the luminous Kate Baldwin) younger brother then, in act two, as her son—both of whom are named John. Roll show clips.


Below, Ryan takes on seven questions about the musical, the decades it spans and his co-star.

1. My best/worst sports memory is:
My best sports memory would certainly be watching my older brother and sister on the field during their many soccer matches growing up. They, unlike myself, had true talent for the sport. However, I was put to good use cheering them on from the sidelines. They are much older than I, and as a pretty spunky little kid, roaming around tournaments and the like, I became a bit of a mascot around those teams. Looking back, I miss the times when I was so frequently able to support my siblings in their areas of skill. These days, they mostly spend time cheering ME on, and not from the sidelines, but from the front row!

Worst sports memory: If there was any sport I had a knack for, it was snowboarding. I was much better on the slopes than in the park. Once, as I attempted a jump onto the rail, my board came out from under me and I smacked the back of my head on the rail pretty badly. Of course, I had always thought my helmet made me look un-cool. Well, after that day I made sure never again to hit the slopes without it.

2. John and Jen decade I’d have most liked to live in:
Definitely the 60's. All the talk of Woodstock, the summer of love, and the rise of the Beatles has got me wishing I'd been around to really see what that time was like. Of course there's also the distinct possibility I'd have been drafted for the Vietnam War… so then again, maybe not.

3. TV talk show that will always have a place in my heart:
David Letterman! My mom has always watched it every night. He is the coolest guy on the planet—I'm fairly sure of this.

4. If I were to write a song about my college days, it would be called:
Haha! In an effort to conceal the more scandalous of my college activities, I'd probably go with something along the lines of the Michigan fight song, "Hail To The Victors."

Maybe my song would be called "Going Blue (Without Literally Going Blue In The Face From Too Much Captain Morgan)" I plead the fifth.

5. A Kate Baldwin memory I’ll cherish forever:
She's so damn cool that truly, just ONE memory cannot be chosen for this. But the one that comes to mind is the day we were staging "Baseball," and I was continuously swinging this prop bat that was really a cardboard poster-package tube. It had a plastic cap on the end, and during one of our runs of the song, I swung it with such force that the cap flew off and hit Kate in the face! My life (and career) flashed before my eyes as I thought "I have blinded Kate Baldwin. I have ASSAULTED Kate Baldwin." But of course, like the true broad she is, she waved it off without a thought as if nothing had happened. She's unflappable like that. "Oh for God's sake, it was a piece of plastic, let's get on with the scene." That's probably what she said. I wouldn't remember—I've blacked it out in shame.

6. When I think of childhood Christmases, I think of:
Family. My mom. My siblings. I asked for a dog pretty much every year until I was 11 or 12. Then I asked for an iPod. And what did I get? A golden retriever. RUFUS. I'm pretty sure as I petted him for the first time I mumbled, "but I wanted an iPod…"

7. Thinking about my bedroom right now, four things I would say goodbye to in song would be:
Bye terrariums. Bye laptop (but really, bye House Of Cards). Bye humidifier. And most obviously and most importantly—BYE BED!