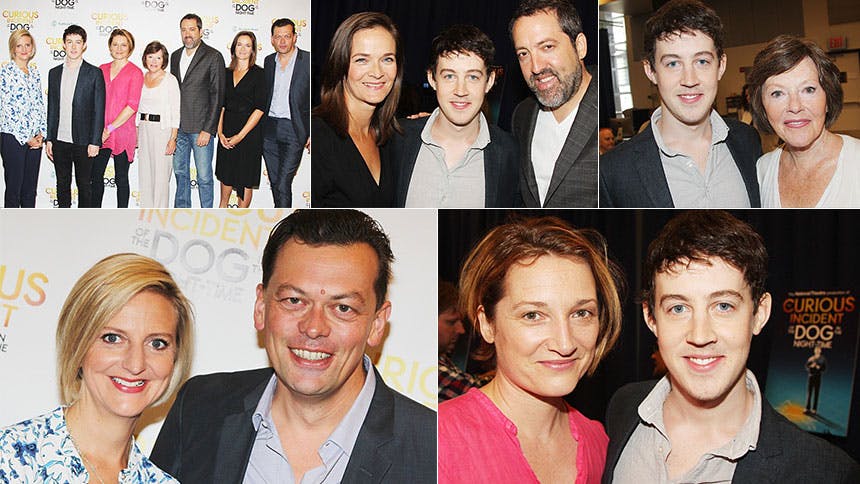 The Olivier Award-record-breaking British import The Curious Incident of the Dog in the Night-Time is working its magic on Broadway audiences at the Barrymore Theatre. Based on the best-selling novel, the play follows 15-year-old Christopher as embarks an odyssey all around the U.K. to solve mystery after mystery in a quest to uncover the truth about his family. BroadwayBox caught up with the cast and creative team to hear from them about what the biggest adventure or odyssey they experienced in their adolescence was.

“Me and my best friend lived in this tiny village, almost a hamlet in the south of England—thank God he lived across the road from me because it would have been so boring otherwise. It was all countryside and there was a river that frequently got flooded; one time it flooded and washed up on the bank, there was this huge fiberglass raft, and we couldn’t work out what it was for. It was all smashed up and covered in dirt. We dragged it back up to the house and got a fiber glass repair kit and basically renovated it. Then we spent that summer—I must have been 13 or 14—sneaking beers from the fridge, packing a picnic and rowing ourselves way up river to explore forests and go into our imaginations. It was one of those summers that was an iconic childhood summer in the south of England.”

“It’s probably quite boring to a lot of people, but the biggest adventure I ever went on was following the instinct that I wanted to become a writer and that I wanted to write for the theatre. To find the bravery to do it, even when everyone told me to stop; it’s like Christopher and his story, everybody tells him he should stop—stop trying to find out the truth of what happened. When I was a kid starting out, nobody thought I could do this. My teachers wanted me to train to be a lawyer or a schoolteacher, and my parents though I was wasting my education and they worried I was going to throw my life away. And to get from there to here, in a rehearsal room on 42nd street with my play opening on Broadway, that’s my Christopher Boone adventure.”


“My family was living in Spain when I was a boy and I was not a good skier, but they had a ski week where all the kids go up to the Pyrenees Mountains to ski, and I was sort of suckered into going off the mountain we were supposed to be on and on this back trail with these other guys who were really good skiers. And then a blizzard came in, and it was a whole odyssey of trying to get back and I couldn't really ski. It was pretty scary.”


“I was much, much younger than Christopher and I was staying with my grandmother for a couple of days—my parents were away and they lived not far from my grandmother—and I decided to go home. I left. (I think I was five.) And I thought I knew the route, and I walked and walked and I got to a certain point where there were three different possibilities, and I knew I was lost. So I walked to the police station and I crossed a very busy street, and I went in and said, ‘I’m lost and I need you to take me to my grandmothers.’ I don't think she ever got over that, but I was fine.”

“Mine was going to Africa. I wasn't that young, it was just before I went to drama school, but it was that gap year. I had a huge heartbreak in my life and I thought, ‘Where can I go?’ And my father said, ‘Why don't you go to Africa?’ and I thought, ‘Ok!’ I got my shots in a week and borrowed a rucksack and I didn't know what I was going to do. It ended up being an amazing adventure and I met so many people. I drove across country in a Land Rover and lived in a place with chimpanzees. It was cool but I was terrified. And I thought, ‘Maybe I could have this life where I act and go to London to do plays, but live here in the middle of nowhere Africa.’ And I still wish I could do that.”

“I grew up in a small town in Texas and always went to the same school with the same people. And somewhere around my freshman year, I was unhappy and said to my mother, ‘There’s got to be something more than this.’ And then we found this school for the arts in Houston—which was an hour or so away from my house—and I got in, but we didn't know how I was going to get there and how we’d work it out. So we devised this elaborate routine where she would drive me to the park and ride, I would get on a bus that would take me to downtown Houston, then I’d get off that bus and get on a city bus that would take me to the school and then I’d walk. And now that I have kids, I think, ‘What!?!’ I will always remember the first day doing it, I was so nervous; Then I walked into this school for the arts, this place where people cared more than just about football, and I thought I’d gone to heaven; I literally felt like I was 100 feet tall. And I loved the car to bus to bus to walk journey because it got me there. Kudos to my mom for making that happen for me.”

“It wasn't as inspiring or exciting as Christopher, but I was born in London and then we moved to Manchester—which quite a long way away—when I was eight, and it was a big journey for me to shift from one area of the country to another. Everybody spoke very differently in Manchester, and over the course of the next few years, I had to learn how to speak with a Mancunian accent—it’s like a totally different vernacular. So I suppose that was a big adventure for me.”

And while all of these adventures are noteworthy, none quite compare to what Chris goes through during the magnificent ‘Curious Incident.’ See it for yourself today.

The Curious Incident of the Dog in the Night-Time
Best Priced Tickets
Newer
5 Times Andrew Rannells Completely Blew Our Minds at Hedwig and the Angry Inch
Older
If You Like Humans Of New York, Then You Have To Check Out Amanda Quaid's American Voices