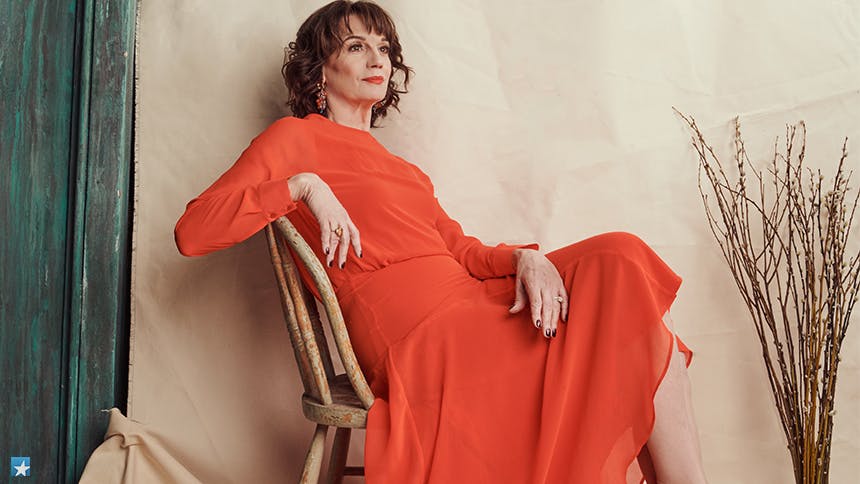 The Broadway showstopper is alive and well and living its best life this season, thanks to the 10 incredible performers featured in our upcoming spring photo & interview series. The talented group was photographed by Jenny Anderson at Times Square's Haswell Green's. Next up is Tony Award winner and 2019 Tony Award nominee Beth Leavel who soars to new heights as fictional Broadway diva Dee Dee Allen in Tony-nominated Best Musical The Prom. The gifted Broadway star stops the show TWICE with her belting prowess in The Lady’s Improving” and “It’s Not About Me”. It’s one of the biggest star turns of the Broadway season and the most memorable.


1. In The Prom, you have two, huge belting showstoppers. They are both so epic. How do you balance them? Is one harder to perform eight times a week?
It's actually more difficult to do "It's Not About Me", because it's so physical and so high-energy and the belt is nonstop. Then, they have mama dancing, which is really…fun, but it's like cardio belt and dance—climb on bleachers and hold a C as long as you could in sequin leopard pants. Broadway's hard, let me just say that right now. For "The Ladies Improving", I just have to take care of myself and convince Michael Potts’ character to fall in love with me.

2. This character in The Prom was written specifically around you and your talents. So, when you first began the process, who did you want Dee Dee Allen to be? What was important to you?
I didn't know. The writers are so smart. I could see the direction they were going with her. And when she was first being born, she was much bitchier than she is now. She was much less likable. And to the credit of the authors—and I think to Beth Leavel—we've created someone who really has an arc. When she starts out, her humanity is in question a little bit. Then she really discovers herself, and begins the journey of discovering her authenticity and her love for someone besides herself. That’s who we all wanted her to be, but we had to go through Dee Dee's bad side before we got to what is now on stage at the Longacre Theatre.


3. You are obviously the first and only Dee Dee Allen, but, eventually, other people will play Dee Dee at their schools, on tour, etc. What do you want these women to know about the character and what they are taking on?
No, I will play all of them. [Laughs]
A. Get into cardio shape because it is a lot physically.
B. Allow yourself to make this journey that I was just starting about. Dee Dee is not unlovable or unlikable, she just doesn't know her heart yet. So be available to that exploration, and be available to fall in love by the end of the show and to change. “I have been change for good.”

4. What was the biggest challenge for you in this role, and how did you overcome it?
The biggest challenge was making her likable—making audiences care about her and not for her to just be funny. To discover her heart was a journey that the writers, Casey [Nicholaw, the director] and I all went through. And I think we did that successfully. The second hardest thing (see before) is singing, "Not About Me" and belting on top bleachers as. they. move. Thank you.


5. I’m obsessed with for your voice on The Prom cast recording (and Drowsy obviously). Who are the voices you were obsessed with when you were growing up?
You know what is really interesting, my family was not into anything. So, I didn't start really listening to a lot of music until high school and college. Then, I became obsessed with The Divine Miss M and The Manhattan Transfer. Then someone wanted me to listen to Liza with a “Z”, and that kind of started that whole thing. Then there was no turning back.

6. Do you remember the first time you felt truly talented—like what you had was special?
Not really. I'm constantly—and I think so many actors would agree with this—I always think every single show is going to be my last one. That I’m going to be found out—"Oh my gosh, I am not talented, I am just lucky." That’s starting to blur a little bit. Each time I am so pleased that people like what I do and I serve the author's intentions and I'm doing what I am supposed to be doing.

But I was thinking about this the other day (how weird is this?), I was in Betty Kovacs’ School of Dance, in fourth grade, and I remember doing a step for our recital and thinking, "I'm good at this." Not necessarily the dance, but just having a good time on stage and wanting the audience to like me. And I guess we continue to do that until we no longer can.


7. Circling back to thinking how every job is your last, winning a Tony Award didn't change that for you?
No.
Did you put more pressure on yourself as a Tony winner, or was it "I have this finally, and I can breathe a little bit"?
Both. For a while it was, "Oh my gosh, thank you." It felt so great to have my peers and the people in this industry acknowledge my body of work. I always call myself a worker bee. But it I never feel like, "Well, I'll never have to audition or worry about getting work again," because that is just not a reality. And that's okay. But I still never know when my next job is going to be. Fortunately, I have relationship with Casey [Nicholaw] and Bob [Martin], so I am always going, "Whatever's next, I am right with you if you need me". But we'll see. Who knows what happens after Prom? I don’t know. I'm going do The Prom until I can't sing anymore.

8. But as an actress and, particularly as Dee Dee Allen, you show us this seemingly invincible woman. What do you do to fight this doubt you feel and present such strength to the audience?
If you only knew what you have to do sometimes to make that voice be quiet. I’ve learned many tricks to just not let it win. I know that it’s a normal part of my process, and that if it wasn’t so important, maybe it wouldn’t be so fearful. But it is important, and I refuse to ever let fear win. Once I’m in there, the audience relaxes me and I’m good to go, but it’s an argument I can have with myself.


9. Outside Dee Dee and The Prom, what has been the most rewarding experience of your career?
There are many of those moments, where I go "Ah ha, this felt really wonderful". But the one that comes to mind right now is doing Mama Rose this summer at The Muny. I was so terrified of approaching that role and so intimidated by it, and so worried that I wasn't going to bring what I needed to bring. Then I just let go of all of that and just brought Beth to that, with the help of my phenomenal cast (including Adam Heller) and my director, Rob Ruggerio. I felt really proud of that. I got out of my head and I just did my work. That was an experience that meant a lot to me.

10. Finally, tell me about leading a company and that responsibility.
Yeah, it is a responsibility, and it is a privilege, especially with a show like The Prom, when there are so many young people. It’s not even something that I do consciously. Brooks, Angie, Chris, and I are like the leaders, and I want the kids to learn not only professionalism from us, but learn how to lead a company with love and heart. I want to make it a joyful work space and a professional work space where we love to laugh and we care about each other.
Do you remember who you looked to when you were coming up? Who taught you by example how to lead?
Yes, at 42nd Street, there was so many. My Broadway debut was Anytime Annie, and there were women that played Dorothy Brock or Maggie Jones. Bobo Lewis really comes to mind. She just changed my life. And Peggy Castle. We would just sit around them at night, if we went out after the show, and just listen to their stories around our campfire. I learned so much from them—their life in the theatre, how their profession and this industry has changed. I really looked up to Bobo Lewis so very much. I wanted to be her. This strong autonomous woman, living in New York, who had fierce opinions, and was just a phenomenal talent. Not an over-the-marquee star, but she was such a star to me.