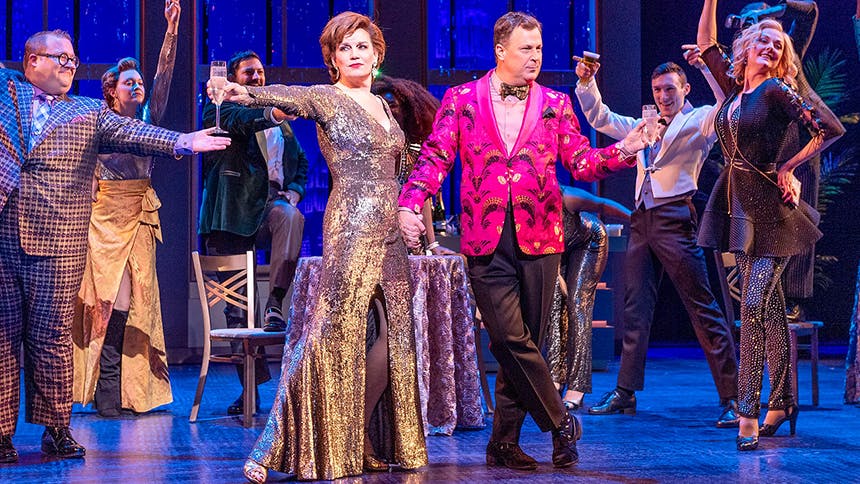 Brooks Ashmanskas is The Prom

king we need and deserve right now. A Tony Award nominee for his featured performances in Martin Short: Fame Becomes Me, Brooks stars in the original, new musical as Barry Glickman, a Drama Desk award-winning actor who turns to activism after his FDR musical flops hard. You'd be hard-pressed to find a funnier performance on Broadway right now.


BroadwayBox caught up with Brooks to discuss finding the balance within The Prom, his teen years and finding his community, and how Broadway continues to surprise him after 14 shows.

1. The role of Barry was written around you and has described as “a heightened version of you”. What's the most difficult part of playing a character that's just a stone's throw away from yourself?
On paper, you'd think it would be simple, but the difficult part is the tone. To what level do you go big, and to what level can you go small? There are moments of seriousness in it as well, but you don't want to teeter over into a tricky sentimental place. Likewise, with the larger comedic parts of it; you don't want to go too far. Just calibrating that is probably the most difficult. With a comedy, you really can't fully realize anything until you have an audience. So, it's a constant partnership with the audience.

2. Do you remember the role that you played when you were young that gave you the confidence to pursue a life in professional musical theatre?
I did a lot of shows in high school. I went to a very large high school that actually had a lot of support for the theatre department. I played Barnum in Barnum when I was about 15—that's really great casting. I did Emcee in Cabaret, Don Lockwood in Singin’ in the Rain, and Stop the World, I Want to Get Off—that was a big one. That certainly gave me the confidence, because I was given the opportunities to play big parts in high school.

And I did my first professional show while I was in high school. I did a production of A Chorus Line in Portland, Oregon, where I lived, at the Pacific Theater. I was by far the youngest person there, and I got the part, and that will give you confidence. To be around professionals who are older than you are, and have them sort of patting you on the back and saying, "good job". Hearing a full audience laugh. Those kinds of things. I always knew I wanted to do it, even when I was young.

3. I love the Barry/Emma relationship and how he becomes this important piece of gay representation that she's starved for in that town. Who or what was the first important piece of gay representation for you when you were growing up?
Oh god, I don't know if I could pinpoint it. It's interesting, talking about that Chorus Line; it was certainly filled with a bunch of homos, and to be around funny, smart, gay people who just lived their lives the way they lived it was very impressive. It didn't make you feel ashamed. I was very lucky in that I had supportive parents. Also, this was at a time when everyone was dying. So, to have people who were so strong and such a community. During the early ‘80s, when the AIDS crisis was just crazy, there was a sense of community and connection with the people who were surviving it—and watching many friends of mine die. Those things give you a very deep and lovely perspective on what it means to be gay.

4. You've said that you grew up in a very funny family, but can you recall the first time you felt funny?
I remember being very young, and being on a camping trip with my family and a bunch of other families that were close to my parents. I remember being around the fire and telling some sort of story about school—I don't even remember what it was specifically—but telling some sort of story in a way that made people laugh. Whether they were laughing at me, arguable. But I remember that specific feeling of making people laugh.

5. The Prom is your 14th Broadway show. In what ways does the experience of being on Broadway continue to surprise you?
It always comes down to the people you're working with. I'm always surprised, with every show, by the group of people I'm working with—whether it be the creative team, the fellow cast members, the crew, the orchestra, whatever it is. I love how collaborative musical theatre is. I'm always surprised by how normal people are and how talented people are. Everyone I know is talented, but you do a show like The Prom, and it's like all these young kids who can do everything. And it's a lovely community. Otherwise, why do it? Why work so hard, if you're going to be around a bunch of jackasses? This show is a great example of being surrounded by people I've known for 30 years, who you just know are going to have your back and they're doing their jobs brilliantly. It makes it so much easier and more fun.

Don't miss Brooks Ashmanskas and his incredible star-turn as Barry Glickman in 'The Prom' at Broadway's Longacre Theatre.

The Prom
Best Priced Tickets
Newer
Is Anyone Alive Out There? Is Part Post-Apocalyptic Musical, Part Podcast, and Completely Clever
Older
Take a Sneak Peek at Eva Noblezada & Reeve Carney's Hadestown Love Song "All I've Ever Known"
Sign up for BroadwayBox Discount Alerts