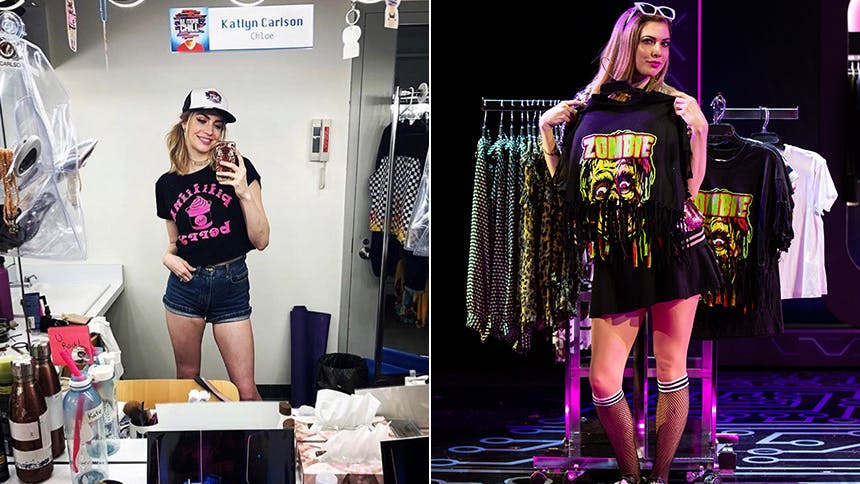 . Her Chloe is the perfect mix of Regina George and Alexis Rose from Schitt's Creek—this is a self-obsessed mean girl with plenty of heart and humor. BroadwayBox caught up with Katlyn, who has been a part of the show since its world premiere in NJ, to discuss the Joe Iconis musical, her high school obsessions, all things Chloe, and the early milestones that led her to Broadway. .

1. You’ve been with the production since its world premiere. How has Chloe changed since then?
In 1.0 (New Jersey) & 2.0 (Off-Broadway), I was channeling how my personal high school Chloes made me feel. In 3.0, I’m also digging into what I remember as the frustration and exhaustion of not being seen the way you want to be seen, not entirely knowing yet who you really are, or want to be. So much of Chloe's own perceived identity and value has hinged upon her relationships with Jake and Brooke, and in this production, I get to play much more with exactly why that is. As Chloe 3.0 crystallized early in Broadway rehearsals, I wrote “BROOKE IS POPULAR BECAUSE SHE’S NICE. YOU’RE POPULAR BECAUSE EVERYONE IS AFRAID OF YOU” in giant letters in my notes. I pitched that idea to Joe Tracz, and luckily, he was so onboard with it, he wrote a version of that into my dialogue. It's been my bedrock for Chloe 3.0. I’m enjoying playing the wild mood swings and extremity of emotion that I definitely felt as a high schooler. It all allows me to be the sharpest, meanest, messiest, funniest version of Chloe.

2. Who was your first call after you realized you’d be making your Broadway debut with Be More Chill?
I’m pretty sure it was my husband—but he was at work & couldn’t pick up—so I called my parents who were, I believe, in the car on the spotty-reception back roads of my small hometown, so they couldn’t pick up either! Fortunately, I had recorded a weepy “We’re going to Broadwaaaaay” video onstage immediately after I found out, which I texted to my husband, my parents, my brother, & my aunt (with a “TOP SECRET VIDEO INCOMING” disclaimer). Then the freaking-out texts and phone calls started rolling in.

3. What was your musical obsession when you were in high school? What spoke to you about it?
I loved Rent. My friends and I would constantly sing the entire album a cappella from beginning to end. We had every nuance memorized, and a mutual understanding of whom would sing which roles according to how many people were participating in any given spontaneous performance. (Just two of us? I was on the Mark/Mimi/Angel/Maureen track). As a teenager in Eureka, MO, I really didn’t have much of anything in common with those East Village bohemians I worshipped, but I felt so connected to their desperate, shared desire for personal expression and connection; the attitude that art and finding people who love you for the freak that you are, are the most vital things in the world (“the need to express, to communicate,” I guess, eh?). The urgency of the “no day but today” mantra just cut right to the heart of my teenage self.

5. Tell us a memorable audition story.
This is very earnest but: As a senior in high school, I was Lady Macbeth in my theatre club’s production of Macbeth. My mom noticed a casting call in the local newspaper for the first ever Shakespeare Festival of St. Louis. She circled it, cut it out of the paper, showed it to me and said, “You should audition for this, you can do Shakespeare!” At first I was probably like, “Whatever MOM,” but I ended up going. It was my first-ever professional audition. My “headshot” was a 3x5 photograph from, like, Thanksgiving at my grandparents’ house of me standing next to a fern, and my resume was a handful of high school shows. I did Lady M’s “What beast was’t then...?” monologue. When I finished, the festival producer, Rob Townsend, said, “Who are you? Where did you train? Where did you learn to do that?” I kind of thought I was in trouble and answered “Ummm train...? I’m a senior at Eureka High School...” And he said, “Well, Katie, I just can’t believe that. You’re very good at this.” It was my first time being truly validated by an industry professional. I think I floated a foot off the stage. He gave me a callback and cast me in the ensemble. I missed several of my last weeks of high school to rehearse with all of these professional actors. It was thrilling. That audition definitely gave me an, um, inaccurate impression of how friendly and successful auditions usually are! But it certainly changed the course of my life. I appreciate Rob so much for giving me the confidence to believe that hey, yeah, I could really do this. I still have that newspaper casting call in a scrapbook! (Thanks, Mom.)

6. Who do you think Chloe becomes in college?
I think Chloe becomes the aggressive but respected editor in chief of her university newspaper—cracking some dramatic scandal to great acclaim—which she parlays into a career in political journalism and punditry, where she can delight in eviscerating her foes for the good of the world.

7. What’s your favorite small moment you share with Lauren Marcus as Chloe and Brooke?
I have so many! My current fave might be after Jeremy’s Squip-enabled “if we zombies have offended” soliloquy. Brooke & Chloe are absolutely staggered by this unexpected display of talent, and we giggle about his vocal choices and say things like “Did he turn British?” and “OMG, he’s better than Zac Efron.” It’s different every performance and we get to run offstage laughing at ourselves.

8. What’s the best Halloween costume you totally rocked?
I love a last-minute, thrown together costume, and I happen to do them really well because my husband and I used to do a ton of sketch shows, so we have lots of random stuff at our disposal. A couple of years ago, right before I left the house to see the Iconis & Family Halloween show, I decided I should dress up; so I grabbed an old mop wig, a vintage sailor shirt I used to wear in college, cutoff denim shorts, fishnets and knee high boots, threw on some doll makeup using red lipstick and black eyeliner, and called myself “Ratchety Ann.” It was equal parts sexy and goofy and best of all, free!

9. When did you know that you wanted to be a professional actress?
My junior year of high school I was playing Reba in The Last Night of Ballyhoo. I had an exit line that one night got a huge laugh which turned into a round of applause. I stopped in my tracks and just soaked that feeling in, suddenly knowing I had to try and feel it forever.

10. When you look back on this Be More Chill experience so far, what’s been the biggest pinch-me moment?
I’ll go with the most recent: we participated in the Broadway Easter Bonnet competition, which takes place on the gigantic Lion King stage. That alone was pretty trippy—so cool to be surrounded by all those amazing masks and see all of that epic scenery—but add to that the fact that our number literally followed Joel Grey. And I was dressed as Cher, basically in my underwear, performing for Patrick Page & all these Broadway superstars. Then, from the wings, we watched all of the bonnet models wearing these insane designs ascend Pride Rock, while Bryan Cranston, Jeff Daniels, Kelli O’Hara & Glenda Jackson came onstage to announce the winners. It was so incredibly surreal, but a total blast. That’s a good summation of the whole BMC experience: surreal, but a blast.