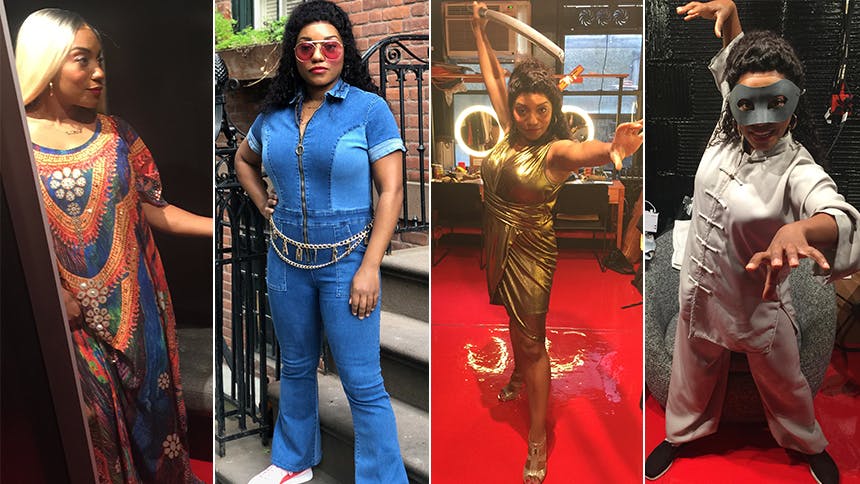 . The actress and recording artist plays a variety of characters (including the badass bounty hunter, Sienna), and she kicks off the show singing the musical's anthem "Woman of a Certain Age".


Scroll on as Badia introduces us all her crazy Broadway Bounty Hunter characters and the fierce Sarafina Bush lewks she rocks for each.

Our costume designer is Sarafina Bush.  She is a miracle worker.  I feel like a million bucks in all my clothes.  She made sure my clothes were fitting and appropriate for the time period and style of the show.  Come along as I show you how fierce she has me looking and feeling.

She opens the show, honey!  I am the first person you see...in this outfit! When we first started, the idea of the Street Singer was to look very homely. Sarafina had me in a head wrap with a knit top and a long skirt.  We soon found out I was tripping on the skirt so they changed it to loose-fitting palazzo pants. Then, there was sudden change of plans. They wanted me to open the show in a more Rock ‘N’ Roll fashion. That's when the leather pants, fringed top with a sparkling black and gold cover up with huge hair showed up. Hence, my Chaka Khan moment!  Instead of "I'm every woman", I open the show with "Woman of a Certain Age."

Sienna is one of the head bounty hunters, and she is not to be messed with. Sarafina and our wonderful director/choreographer, Jennifer Werner, had the idea of Sienna wearing a denim jumpsuit when they were plotting out the show.  Of course, I loved the idea of being in a jumpsuit reminiscent of the ‘70s. I also like that the jumpsuit is stretch material so it has a lot of give. I need it because we move a lot in the show! Might I also add that this jumpsuit is fitted in all the right places so it keeps your girl away from the Devil Dogs. Adding to the flavor is Sienna's favorite color, pink. She has pink sunglasses, pink suede Puma sneakers, and even wears pink eyeshadow. For jewelry, she wears a gold waist chain that says L'Amore (she loves love), gold hoop earrings, and a gold necklace that says Beauty.

In this outfit, I play a demon inside Lazarus' head dancing upon the good or bad decisions he makes for himself. One element of our show is a play on Chinese Sploitation—Kung Fu movies of the past. So here, we are dressed reminiscent of that era of film down to the black Chinese slippers.

Her name is Kitty Kat...and I named her just now. LOL! She is one of the ho's in the Ho House. Sarafina got this cute number from Rihanna's lingerie line, Fenty. I love the baby doll look with the feathers attached at the bust and the bottom hem. With my long blond wig, I feel sexy and really get into the part. Even if it only lasts for a minute!

The Madam runs the Ho House, or as she calls her girls...Climaxx Coaches.  This caftan slides right over the feathered teddy right there on stage. We needed something to turn into the Madam quickly from previously being in the ho house. A caftan seemed like the obvious choice. Sarafina took an already cute caftan and added some bedazzled jewelry onto it to make it sparkle and stand out under the lights. This is one of my favorite outfits and characters in the show. I feel regal, but also about my business!

I am a character in a musical within another character in a musical called Young People—The Musical. Here I get to dance around, be highly energetic, and relive my 20s. Chile... To give me that young look, I'm wearing a short tank dress that flares with the tiniest backpack, and a large stuffed animal clipped to the back. It's ridiculously funny when I'm dancing around and the stuffed animal is flopping all over the place right along with me. We are a team!

This is the moment in the show where I literally get to be Annie Golden. The lights go down and I fight the bad guys as Annie. I wear a similar outfit as her, and under the lights you can't tell it’s me. I under dress for the next scene because it is a quick change, but over that we have the same faux snakeskin quarter length coat, and we have the same ponytail too! People in the front row don't know it's me!

This is my final change before I end the show as Sienna. Sienna's man is named Rick. Although you never actually meet Rick in the show, his presence is largely felt throughout the play. In this outfit, Sienna and Rick go out on a date to the theatre, but because she is always a bounty hunter the Katana blade is never far away. Sarafina has me in a gold sleeveless dress that used to be ankle length. One of my best features are my legs, so Saraphina shortened the dress. I wear this dress with the most comfortable Michael Kors zip-up, rhinestone ankle shoes with a peep toe. I fall to the ground in this outfit, then get back up.  Again, because the show is so physical it also has some give.

All in all, I love all my costumes and I'm buying them when the show closes. There are even some costume pieces that Sarafina had for me that didn't work for the show, but best believe I will be getting those as well!

I hope you enjoyed this journey with me as I took you on all my costume changes.  I am having so much fun in this show, and I love doing it 6 days a week with this cast and crew.

Broadway Bounty Hunter
New
Best Priced Tickets
Newer
Introduce Yourself(ie): 10 Questions with Come From Away Star Petrina Bromley
Older
Bat Out of Hell Star Andrew Polec Wails On Meat Loaf and Jim Steinman's epic "I Would Do Anything For Love (But I Won't Do That)"
Sign up for BroadwayBox Discount Alerts