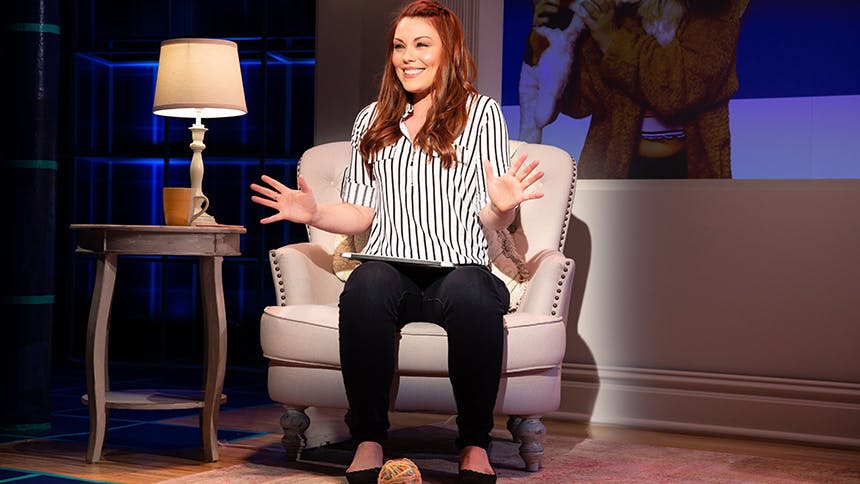 . Part musical, part improv sketch show, the comedy follows Robyn, a down on her luck dater, as she goes online and creates 38 fake dating profiles in hopes of better understanding the random nature of love and dating. It's hilarious, unique, and a wild ride for a date or a singles night out. BroadwayBox caught up with Kaitlyn (who is best known to TV audiences for her years playing AnnaBeth Nass on The CW series Hart of Dixie) about leaving LA to open #DateMe in NYC, relating to the show as a hopeless romantic, and meeting Hart of Dixie fans in unlikely places.


1. What made you want to make your New York stage debut with #DateMe? Was there something that spoke to you about it particularly?
Well, I’ve been living in L.A. for the past twelve years, so I have mainly focused on television and film. The script was incredibly relatable for me, still single and a hopeless romantic. I could empathize with Robyn’s loneliness and struggles with online dating. I worked tirelessly on the material for the audition and when I was offered the role I packed up my life and moved to NYC without hesitation.

2. For you, what makes someone “undateable”? Which “undateable” character are you having the most fun with?
I think “undateable” means the extreme of any particular personality type. Testing the limit of how far you can push what’s accepted as social norms. I love playing traylovescats. She fun, whacky and adorable.

3. #DateMe is quite interactive with the audience. What do you love about breaking down the fourth wall and what is terrifying about that?
I love being able to talk directly to the audience. I invite them on my journey and I value the connection we have by the end. The improv is a bit terrifying for me since I had only taken a handful of classes.

4. What’s the most random place a Hart of Dixie fan has stopped you? What do fans of the series want to talk about most with you?
I was in France, visiting Versailles, and a girl yelled out, “Annabeth, Annabeth!! I love you.” It was wonderful. People often ask if I was happy ending the series with George or would I have preferred Lavon. I just say, I love them both. I’m glad the writers had to make that decision, not me.