Introduce Yourself(ie): 10 Questions with Come From Away Star Petrina Bromley 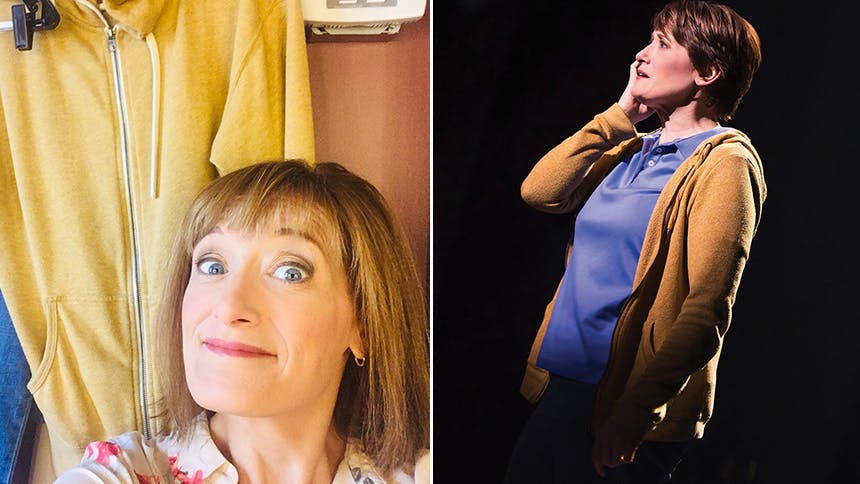 Petrina Bromley has played over 1,000 performances as Bonnie (the manager of the animal shelter in Gander and member of the local ASPCA) and others in the award-winning hit Broadway musical Come From Away

. It's a Broadway debut for the Newfoundlander and a personal story, since Come From Away tells the true story of 7,000 passengers stranded in the small town in Newfoundland after 9/11.

BroadwayBox gets to know Petrina a bit better below as she discusses the pressures of representing Newfoundland, the incredible family the company has become, and how Come From Away has changed her as a person and a performer.

1. After 1,000 performances, how do you remain present and fresh?
It’s a challenge. Not gonna lie. But the beauty of our show is the ensemble. I get to play with my friends every night and there are always new and slightly different moments that happen within every person’s individual show, because we’re human. We’re consistent. But we’re only human. And the audience changes things with each show. They are the final cast member and the way they choose to react to scenes always influences the energy on stage.

And I like to always remember that there are likely people in the house for whom this show is a risk. People who have tragic histories with the events of 9/11. So, I remind myself to be honest and truthful each time I go out. And on the flip-side of that, there are almost always Newfoundlanders and Labradorians in the house who are there with open hearts and pride and joy waiting for a wonderful experience. That dichotomy constantly propels us forward.

2. Was there a responsibility for you being the only Newfoundlander in the cast?
Yes! At least, that was a pressure I put on myself. I came to the show (in La Jolla) with my back a little up, ready to fight for Newfoundland and Labrador, to fight for the type of picture the show painted of the place and its people. We’ve been subject to negative stereotypes in the past and it’s a sore spot with a lot of our people, myself included. So yes, I felt that responsibility. But it was never a question. I realized very early in the process that David and Irene had the best interests of NL at heart and that Chris Ashley, our director, wanted small town people to be given the dignity and humanity they deserve. There was no room for broad stroke stereotypes. So, I relaxed and just did my job.

3. Will you share with us a Come From Away ritual you have?
Coffee. Astrid and I share a dressing room and we both love coffee. I have a little Aeropress and a kettle on our counter so we have a cuppa and catch up. It’s so mundane but it’s so necessary. Lol.

4. Much of this company has been together the entire time and that is incredibly rare. What is your dynamic like now after all these years together?
It is brilliant. I wish every show could experience the sense of community and closeness we have with this show. You often feel like you have a bond with cast members or companies that you work with in this business but this feels like it goes deeper. We are a family.

5. What’s a favorite Canadian credit of yours and why?
Oil & Water, by Robert Chafe, directed by Jillian Keiley with music adapted by Andrew Craig. I’ve done a lot of work with Artistic Fraud of Newfoundland back home. They do original work that tells Newfoundland and Labrador stories in beautifully imaginative ways. Oil & Water tells the true story of Lanier Phillips, the lone African American sailor to make it to shore after the wreck of the SS Truxtun off the coast of NL during WWII. The women of the community of St. Lawrence were tasked with cleaning the sailors up and tending to their injuries. Lanier Phillips was welcomed into the home of a woman named Violet Pike, who I had the privilege of playing, and it changed his life. He was treated with kindness and dignity by a white woman, an experience he had never had before and he credited St. Lawrence with turning his life around. He became the first African American sonar operator in the US Navy and has a life list of accomplishments that can only be seen as heroic. The music is a blend of African American gospel/spirituals and traditional NL/Celtic songs. It’s a beautiful, hopeful show.

6. What have you enjoyed most about living in New York?
THE FOOD. You can find any cultural delicacy or street food or cuisine you can imagine and then way more that you never could’ve imagined. It’s brilliant. AND they’ll deliver it to your door at just about any hour of the day or night. I mean. Seriously. Yum b’y.

7. Have you ever felt star struck backstage at Come From Away? If so, who was the star?
Constantly. But particularly when we met Bernadette Peters and Mandy Patinkin—not at the same time or I may have actually imploded. And we had the honour of meeting the Clintons as well, which just felt other worldly. But, of course, they were charming and gracious and made us all feel like we were friends.

8. What was the first musical you truly loved or were obsessed with growing up? What did you latch onto about it?
Annie. The movie version of 1982. Because it was about kids, and not just kids but girls. And because Carol Burnett was a hero of mine. And because it’s happy and heartbreaking and about not feeling like you belong but finding your place unexpectedly. Those are things I think every kid connects with.

9. How has this experienced with Come From Away changed you as a person and as a performer?
I don’t know that I can put it in words. I am absolutely changed. This is the most incredible experience I’ve ever had—professionally and personally. I hope it’s made me more kind. It’s definitely made me grateful and aware of the importance of kindness in our daily lives.

10. When you arrive at the Schoenfeld Theatre, what is it you look forward to most each performance?
Sharing this beautiful story with anyone who doesn’t know what they’re in for. I love when people come to the show with an idea that they know what the show will be because it generally isn’t that. It’s a hard show to explain in a line or a blurb. But when you see it, when you experience it, you can really be moved and inspired in a way you might not anticipate for your night out.

And I love getting to play with my CFA family. Romano (DiNillo, our bodhràn player) is also from NL and we’ve known each other for a long time. We have a couple of moments in the show where we interact and it makes me smile with delight every time because here we are, two kids from town on a Broadway stage representing NL to the world. Who would of thought that would happen?! Not me. But I’m so glad it did.

Get yourself over to Broadway’s Schoenfeld Theatre to see Petrina Bromley as Bonnie & Others in the hit musical ‘Come From Away’.

Come From Away
Best Priced Tickets
Newer
It's a Feast For the Senses! Take a Look at the Brand-New Moulin Rouge! The Musical Bohemian Remix Video
Older
Looking and Feeling Fierce! Badia Farha Takes Us Through Her Killer Broadway Bounty Hunter Costumes & Characters
Sign up for BroadwayBox Discount Alerts