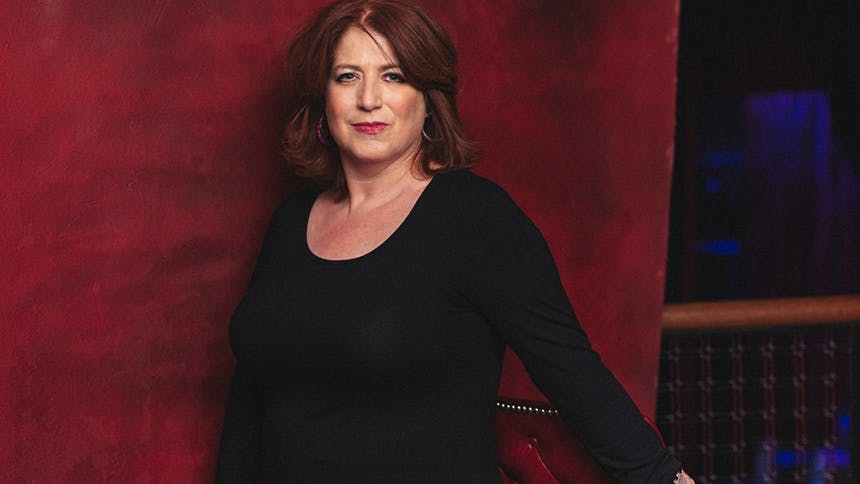 Anne L. Nathan is back at New York Theatre Workshop co-starring in the world premiere stage adaptation of Sing Street

by Enda Walsh, Gary Clark and John Carney. Anne plays Sandra, the mother to one of the boys in the band and a wonderfully supportive figure in the young men's lives. BroadwayBox recently caught up with the musical theater mainstay to discuss how this show compares to Once, what she was like in high school, and her work with Sondheim.


1. It's so easy to make the comparison between Once and Sing Street. Both are intimate Irish musicals which began at New York Theatre Workshop and feature actors playing their own instruments. For you, having been a part of both shows, how does this experience compare to the Once experience downtown? Does it feel at all similar?
It was actually comforting because I already had been through an experience as an actor-musician before. And because I worked with Martin Lowe before and Enda Walsh, we already had a shorthand so that part of it made things really comfortable and easy. Also, I'm playing the piano this time and not the accordion, which is for me a much easier instrument. So that part of it was lovely and warm and fuzzy. It felt very similar to Once in terms of the collaboration. Something so great about being an actor-musician is that people in a cast get pretty close because you're not just acting together and singing, but you're playing. So, all that was equally wonderful. But the show is so different because there's so much electronics, a huge drum kit, four pianos, and electric guitar. So, the sound of it and the life of it was so different than Once. I feel so lucky that I got to do Once, now I get to do this other completely different show that still has that family instruments kind of vibe and also takes place in Ireland.

2. Sing Street is directed by Tony Award winner Rebecca Taichman. What has it been like working with her on this? What is the most important or striking thing that she said to you during the rehearsal process that helped inform your performance?
I admire her so much and I've been wanting to work with her for years. Rebecca is incredible with actors. She is so specific. She doesn't let you off the hook. She doesn't let you just put it for a laugh. She's really wonderful and collaborative. For my first scene—where I come in and the boys are playing and I interrupt them—I knew how to play it so it would be funny. But she kept saying, “But remember, you're there to help the boys, to help them learn, to help them be better musicians, to be the voice of reason." And I really lost sight of that because I did tend to go, "Well I know how to play this scene." So she did often remind me just to remember what the scene is about and how I fit into it. And it only made it funnier and better and richer. She held me accountable—all of us. She didn't let us just take the easy way out.

3. When Sing Street takes place, most of these characters are high school kids, and the audience gets to know them at that point in their lives. I want to know about what high school Anne was like? Were you a big theater nerd? Did you know from then this would be your path?
In high school, I was exactly as nerdy as you could possibly have been. I was 100% in my living room singing “The Music and the Mirror” and trying to be Cassie in A Chorus Line. And singing Mama Rose when I was 13 and every cast album known to man. I got home from high school and I was in it, performing it full-out on stage. So I was that girl. A hundred percent musical theater nerd. 100%.

4. Your resume is packed with high-profile Stephen Sondheim productions. What's been your favorite memory of interacting and working with Sondheim?
Oh my gosh, that's such a good question. Well, I have many because I did do three shows with him. My favorite thing is you always know when he's in the audience because he has an amazing laugh. So, you always felt so good when you heard that laugh and it was because you did something that made him laugh. But I will say that I had a moment with him after I did Sunday in the Park, where we were at the closing party and I told him that I've got Road Show. And to have Stephen Sondheim say to you that he was so excited that I got that and he was so excited to work with me again. It was just thrilling. I mean you can't really put into words what that does.

And I will tell you that same high school, nerdy Anne, her bio for Mame said, "Anne hopes one day to move to New York City and share an apartment with Stephen Sondheim, Bruce Springsteen, and Bette Midler". So that I got to work with him several times is definitely the dream come true.
Is there a Sondheim role that you're dying to play still?
Well, I'd like to be in Forum, but I also want to be in Follies. I’d like to tap, so I’d want to do “Who’s That Woman” or “Broadway Baby”.

5. Wrapping up today, let’s end with Broadway Bounty Hunter. I regret that I did not get to see you do it downtown, but now they're recording the cast album. Is there any chance that you are going to appear on the album, possibly a bonus track?
I am not. You know, they are the most wonderful people. I'm such a fan of that whole team. They tried so hard to figure out a way to do some sort of bonus track but they just couldn't make it work. But I love that group. I am obsessed with Joe Iconis and I want to keep working with him. I think he's so innovative and wonderful, and I loved doing that show. It was really, really fun and really challenging.
If you were to moonlight in a totally new career, like a bounty hunter, what would your second career be?
Oh, I would like to be in politics for sure. I'm really into politics. That's all I do. My nerdy time now when I'm not doing shows is I watch MSNBC and CNN. That's what I would do.