A Look Back at Musicals That Illuminate the Jewish Experience 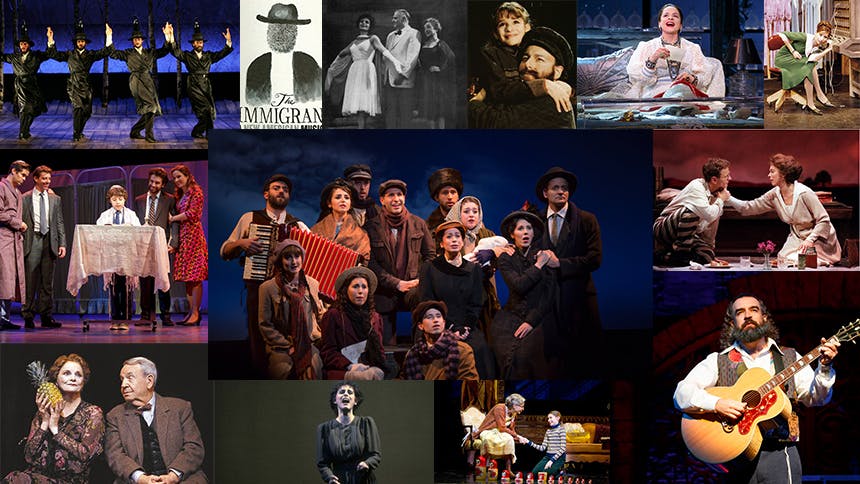 , a musical about the Jewish immigrant experience. The show, recreating an authentic Yiddish music soundscape of NYC from the 1880s through the late 1940s, is presented in Yiddish, with English seeping into the characters’ words as the play progresses, as language does in assimilation—don’t worry there are subtitles!


In celebration of Amerike—The Golden Land, BroadwayBox looks back at a dozen other musicals that speak to and illuminate the Jewish experience in America and abroad.


Considered the ultimate Jewish musical, this is the first title people would say if you ask about Jewish musicals. The story follows Tevye and his five daughters as they balance Jewish tradition with the changing world around them.


The musical begins with the song “Four Jews in a Room Bitching” and goes on to tackle the intersection of the gay experience and the Jewish one in the late ‘70s and early ‘80s. I'm willing to bet no other show has ever sung so much about a bar mitzvah.


Stephen Schwartz & Charles Strouse’s musical about Russian Jewish immigrants who come to New York, live in the Lower East Side tenements, and work the sweatshops, but dream of a better life.


Granted, the Jewish American story of Tateh and his little girl make up only a third of this rich musical about New York in 1906, but their journey from disenchanted, sick immigrants to living the life of a film mogul and an heiress is the American dream. Also, Emma Goldman all day long…


This short-lived musical jumps between New York City in 1977 and Warsaw, Poland during WWII. It’s a moving look at those who lived through the Holocaust and the Jewish Americans a generation removed from the atrocity.


Yes, the Kit Kat Klub is fun and sexy and wild, but the B plot about a German widow and a Jewish businessman who find love during the turbulent rise of the Third Reich is the heart of this iconic musical. 🍍


Jerry Herman’s musical is about Jewish widows looking to find husbands in the Holy Land set against Israel’s struggle to establish itself as an independent nation.


History remembers this musical as the show in which 19-year-old Barbra Streisand made her debut. Set in NYC’s Garment District in 1937, the show follows an  unscrupulous businessman who will do nothing to survive and thrive in the Great Depression.


This cult musical by Jason Robert Brown tells the true story of how anti–Semitism in the South led to the mob murder of Leo Frank (a Yankee Jew).


A bio-musical about the life of Rabbi Shlomo Carlebach, this short-lived show took audiences around the world with the Rabbi and his message of love and prayer.


A Jewish immigrant couple and a Christian American couple in Texas forge an unlikely relationship in the early 1900s.


Helena Rubinstein’s story about being a Jewish woman in power, escaping the crash, escaping WWII, being shut out of New York high society because of her background, and having to embrace her own beauty in a country that didn’t value her makes War Paint a pretty Jewish American musical….at least half of it.

(Of course there are musicals with Jewish plot points like Funny Girl, The Last Five Years, The Band’s Visit, It Shoulda Been You, but they aren’t necessarily Jewish musicals.) See Amerike—The Golden Land at the Museum of Jewish Heritage through August 6.

Amerike - The Golden Land
New
Best Priced Tickets
Newer
Bandstand Stars Laura Osnes & Corey Cott Give Us A Fresh Take on When Harry Met Sally
Older
Six Videos From the Week That Will Make You Shout, “Praise!”
Sign up for BroadwayBox Discount Alerts