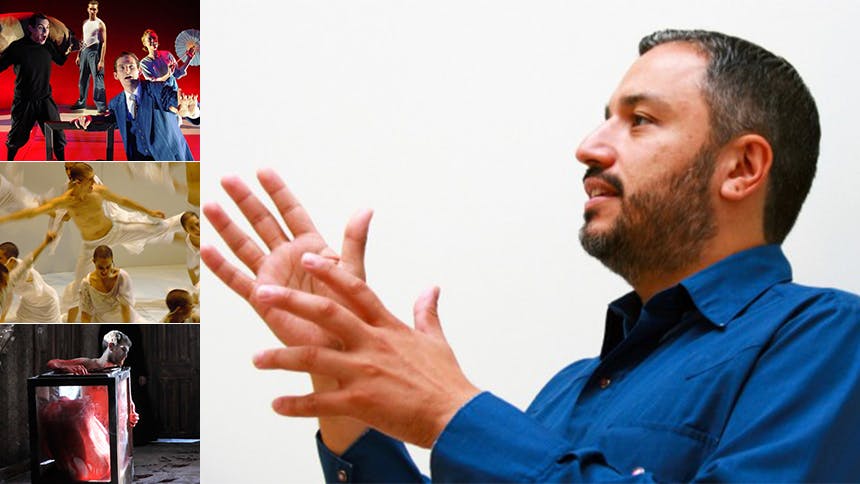 Since its inception in 1997, Theatre Mitu works to expand and reimagine the way you see and experience theatre. The company is known throughout New York, the country, and the world for its daring, fresh, forward-thinking productions. New York audiences have a chance to see their unique staging of Arthur Miller’s Death of a Salesman at BAM through July 23. In this staging, characters outside the Loman family are portrayed by objects and the cast uses mask work to play with the idea of aging and who these people are at the different times in their lives.


BroadwayBox caught up with Theatre Mitu’s Founding Artistic Director, Rubén Polendo, to talk about Death of a Salesman, as well as the way the way this modern company took on other classic works such as Hair, Hamlet, Medea, and

I had started a dialogue with the company about listing and identifying things that as a company we “don’t do”. So, we made a list of Theatre Mitu doesn’t do ____: musicals, Arthur Miller, Shakespeare. Then, I turned to the company and said, “This list we made must be the next three years of our work. If we are inviting audiences to open and engage in new conversations and new landscapes, then there’s a great arrogance in claiming we are going to stay safe in what we do.” So, we changed it from Theatre Mitu doesn’t do ____to how does Theatre Mitu do ____. It was a wonderful earthquake.

How the Concept Was Born:
When Hair first came into the conversation, I went home and had a dream. Truly. In my dream, I saw 30 people with their heads shaved and I heard these electric sounds, and there was no color present—it was all white. Then I came to the company and collaborators ,and at the time NYU, and said, “I feel very strongly the production should have no hair, no color, and we should orchestrate things to be in an electronica sound.” The process of the production would reveal the why—I trust the artistic instinct. Then the process began and we discovered what perception does, what hair does, what gender does. There was a whole controversy each of them had to confront as individuals—everything from their health to their sexuality to their identity was questioned when they shaved their heads. Hair mattered. Hair meant identity. It became this unintentional research phase. All the politics came to light in the framework of the 1960s but also as a contemporary piece. It revealed itself to us. Happily the piece became bigger than us and made a big impact. The fact that we are still talking about that production 10 years later is so meaningful to me.

Striking Visual Moment That Still Stays With Me:
The beginning. We really used the convention of the red curtain at The Skirball Center. When it opened and there was this white space and this individual with no hair, dressed in all white. Then the entirety of the cast comes out of the many doors.

How the Concept Was Born:
Similarly, on our list of things Mitu doesn’t do was Shakespeare. We realized as we started discussing Shakespeare and Hamlet as a company, we sat in a huge spectrum of disagreement around the subject Shakespeare and Hamlet. We had company members who thought it was a waste of time and glorified Eurocentric politicking and others who thought it was the most incredible thing that ever existed. As we had that conversation, we set a challenge for ourselves: Is there a way to present Hamlet and present that whole argument and discourse among the company by creating many points of entry. As a company, we had been doing range of residencies with visual artists, and we really started to look at the practice of crafting installations that are a portal entry into a conversation. What we decided was instead of telling the story of Hamlet, could we create a map that you the audience travel through? A map of disagreements about Hamlet—culturally, personally, in the US, in Europe, on a global landscape. It really created this immersive space. Again, in my oracle nature I had a very clear intent that one of the central voices in the piece would be the character of Hamlet and really place that character in the center of the map and the journey. The only truly identifiable character was Hamlet and it was played by Aysan Celik, a woman and a Muslim.

Striking Visual Moment That Still Stays With Me:
One of the big goals was to really create a sense of community in the audience. The piece had four sections made up of 10-minute moments where you walked through the performance spaces. We collaborated with a range of artists including this punk rock band from Green Point and they were placed right in the middle. They began to play loudly and the audience began to gravitate towards it. It was interesting to see everyone go through the experience and then the music takes over and everyone comes to the center. To unify everyone in the experience and then it breaks away and the installations come to life again and they are different than they were before. It created this beautiful, meditative space.

How the Concept Was Born:
You see in the history of the company, any small conversation becomes rich and big very quickly. I have the great privilege of asking the questions and one I asked the actors was, “In the canon of classical work, what is a character that feels terrifying to inhabit?” One of the actors in the company said I wish there was something like Medea for a male to play. Then when I announced the season I said we should do Medea and have Justin Nestor play it, not just as a man pretending to be a woman but as an iconic mythological creature named Medea. The tension between the female character and the male actor is what we are watching in performance, and the best way to do that is to really display the gender and that landed us on the nudity. You are always reminded by the physical manifestation of Justin that he is a male actor. One of the themes was asphyxiation and we created that in the space. By the time we got to the children, I was more interested in them as objects and manifestations of asphyxiation. So, the children are the box and the box is set up in a way that you can’t tell how many limbs are in there.

Striking Visual Moment That Still Stays With Me:
The most striking image was the killing of the children because it was the one time the box was opened. Weirdly, this emotional thing happened with the audience where you feel air had been allowed in. You found yourself being somehow implicated in the killing of the children. It was really meaningful not only to implicate but to act as an empathy for the plight of this woman.

How the Concept Was Born:
The Odyssey came out of a moment the company was really looking at myths and mythology as defined as the stories we tell to make sense of our world. It was so interesting to view The Odyssey as we know it and to view it as a reconstructed document that has all these micro-myths in it that come from different parts of the world. It became a political document. We teach our belief systems by ways of myth—they can be glorious or dangerous. They serve as propaganda. So, we looked at it like what are we teaching by telling these stories? Then we looked at each of the micro-myths as their own and then created Odysseus as proxy for the audience traveling through these micro-myths. So it was about staging The Odyssey but staging 18 mini-plays within The Odyssey.

Striking Visual Moment That Still Stays With Me:
Music is always a key part of the work we do. There are these really beautiful songs for each of the worlds, and there is Athena, who sings these songs while flying on a bird. My ask to the composer was to make us feel like we are flying on a bird. The moment that stays with me is a really central moment where we send Odysseus home on a bird. It was such a beautiful moment.

How the Concept Was Born:
Again, Miller appeared on our list. We were in Thailand and I packed my Miller plays and I found myself in conversation with artists in the company about the company and where we were. It became a really emotional conversation. Now, most of the company members are heading into their 30s and mid-30s, and it was a tough conversation about things moving so well that you let go of other things in your life—things you were going to do, etc. There was this revelation about letting go. What happens in the moment when you enter the next phase in your life? This is who I am; and am I ready to accept this? Then in Salesman, I found the spectrum of that conversation with Biff and with Willy. I could feel and hear the four central characters so clearly, and everybody else in the play sounded so recorded to me. So, I saw it as really stripped down with the four central characters and one chair; the rest of the characters are played by these 1940s objects that are puppeteered. and all the voices are recorded in the 1930s radio sound.

The piece is normally played by older actors flashing back to their youth but I became interested in younger actors who imagine their old age, and that jump became terrifying. We were having a nervous breakdown during this entire piece because it became this selfish endeavor that reflected us.

Striking Visual Moment That Still Stays With Me:
The revelation of time moving. The piece, of course in Miller’s structure, travels between the present time and when they were younger. We decided when they are older, they will wear these beautiful masks, and the revelation when they remove their masks is so delightful, joyful, and playful. Then when it transitions back and you see the absence of that, it’s so devastating. It’s so difficult to see those memories are always present in their older age. That leap of time is so visceral.


Don’t miss ‘Death of a Salesman’ at BAM through July 23.