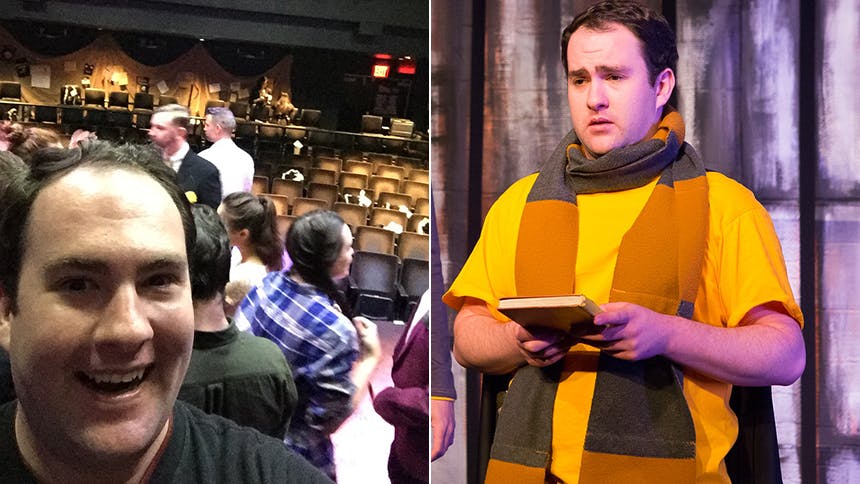 Make no mistake, Zac Moon is not the boy who lived, but his story does run parallel to a certain wizard with a lightning bolt scar in Puffs or: Seven Increasingly Eventful Years at a Certain School of Magic and Magic. This hilarious off-Broadway spoof presents the Potter series from the perspective of Wayne (Moon), an orphan, an underdog, and a house Puff. Scroll on as BroadwayBox gets to know the charming Zac Moon as he talks Puffs, Potter, patronuses, and casting spells to avoid the MTA.


1. My introduction to the Potter franchise:
I actually remember receiving the first three books as a present. I got to when they were all hiding on the remote island from the flood of letters, two chapters in, and went, “this doesn't seem like fun; it actually seems a little scary,” and put the book down! Later when more people were getting into it, I picked it up again and realized that like two pages later it clicked into the real story. From then on I was hooked, midnight releases, the whole shebang.

2. House I’d likely be sorted into:
Oh let's be real, I think I'm a Puff. Put in hard work and be loyal and kind. I can try to live up to that. I'd feel pretty honored if that's what people thought when they remembered me.

3. If my high school experience were a book, it would be called Zac Moon and___:
The almost cool theatre crew. Or how to never quite figure out girls.

4. Biggest way the change of venue has changed the show:
It's definitely been a different beast in each space. The Peoples Improve Theater and New World Stages both have a height that we have to play to while the Elektra was much deeper. We now have a different playing space that's much shallower and wider too, but the proximity to the audience is such a blessing. With each new venue, our set designer, writer and director have been tireless about finding new details, new props or set pieces to further deepen and flesh out this world we get to play in. I think you could see the show three times and still not catch all of the nuances that they've managed to work into this iteration. But at the end being in this new venue just feels so wonderful to have a home where we can share this show with all of the awesome fans that have been so supportive through this whole run.

5. My patronus would probably be:
Oh, it would definitely be an otter (and the Internet confirmed this for me). 100% always been the animal I identified with. I mean have you seen them play with rocks?! Cute overload.

6. Three things you should know about home brewing your own beer:
1. NYC tap water is the way to go. 2. There are a lot of resources out there and people who love sharing their knowledge, so don't stress. 3. You can make a good batch with very minimal knowledge and then dive further and further into all the details and methods to improve even further. (4. Sanitize!)

7. Role in high school or college that I absolutely loved and would want to do again:
I did Thom Pain (based on nothing) by Will Eno in college, which I had no business doing other than it's college and that's when you get to do stuff like that. But man oh man, that show has a place in my heart, and it's one of those roles that I hope I get to play ten years from now to see how differently it resonates from age 20 to age 40. I've also been in two productions of The Odyssey by different playwrights and in different roles. Now that's another story that has so much to mine and I could do 100 more times.

8. The biggest Puffs mishap I’ve experienced:
In the show or in life?? In the show, I was supposed to have a prop prepped in my hand for a little bit of magic, but it got misplaced right before the scene. Luckily my castmates Ellie or Anna (can't remember now, please forgive me!) had my back and figured out a solution in a matter of seconds. That's some Puff friendship right there. In life? I probably have Puff mishaps almost daily. It would be impossible to pick one.

9. My NYC happy place:
Anywhere on the water. Astoria Park, Brooklyn Bridge Park, and Battery Park are a few of my favorite places. I've learned just being near water is a big time stress reliever for me, it's so soothing, peaceful and reinvigorating. Anytime I'm feeling overwhelmed I'll sit by a waterfront and feel better in minutes.

10. The Potter spell I’d most like the ability to perform in real life:
Living in NYC? With the current state of the MTA? You better believe I wish I could just turn on the spot and transport to my destination. Or at least give me a broom, I'd be fine with that too.