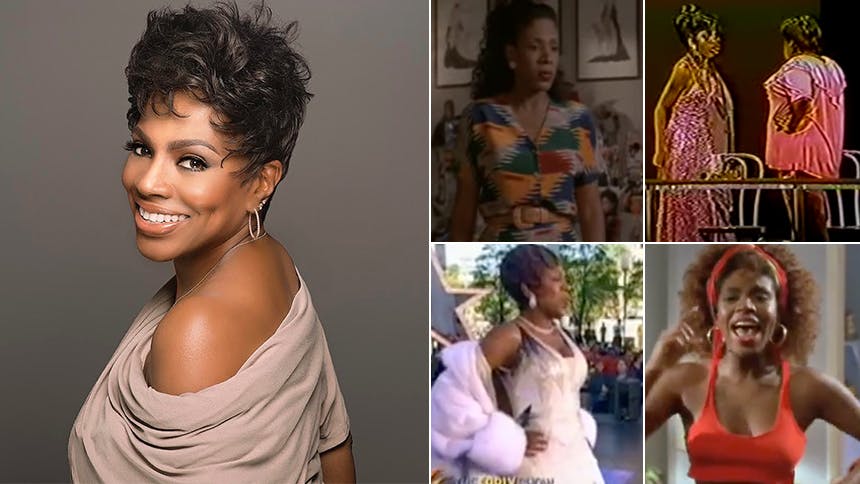 ) Sheryl Lee Ralph takes the stage at the Metropolitan Room on July 30 to present her thrilling new concert A Diva Simply Singing, benefiting her HIV/AIDS nonprofit The Diva Foundation.

A little rehearsal never hurts! Click my bio and get your tix now! http://www.broadwayworld.com/cabaret/article/Sheryl-Lee-Ralph-Performs-At-The-Metropolitan-Room-In-Aid-of-The-Diva-Foundation-20170704


With a set list like this, Sheryl Lee Ralph is sure to stir up some excitement on YouTube; so before the new videos hit the web, BroadwayBox caught up with the warmhearted stage and screen siren to talk about some of her most epic and most beloved YouTube clips.


Sometimes I stand onstage behind Glinda when she is singing “Happy is what happens when all your dreams come true”, and I was literally in that moment at the Tony Awards. At the same time, it was a very difficult time and a very challenging time. We were very young and it was so much all at once. I remember looking at the video thinking, how very fortunate I am. I am still here and still doing what I really, really love to do. Happiness can happen when all your dreams come true, but it doesn’t mean you’re going to be happy all the time. It’s true.


People love that movie, and I had no idea until I came to Wicked just how much Gen X/older Millennials love that movie. I was always aware the talent in the movie because a 16-year-old Lauryn Hill told me she was going to be a star—she told me sitting at the piano that she had a group and they were going to make it. I remember saying, “Fugees?! You might you want to think about changing the name!” That young girl was so talented and so on it. Then there was Jennifer Love Hewitt and Ryan Toby. What people don’t know is all of [Ryan Toby’s] Ahmal costumes came from a store I had called New Nubian. I designed those shirts. I had a whole line of men and babies clothing out of African textiles. I had clothing in that movie and in Waiting to Exhale. I also love that my “shoulda-coulda-woulda” is now a meme. I love it.

“Only in New York”, Thoroughly Modern Millie on CBS, 2002


Oh my gosh, it’s so weird about that. Millie was a show that I learned to speak up for myself and fight for myself. I wasn’t good at that and I watched someone else do that and she won a Tony. I remember thinking, “Why didn’t you say something, Sheryl? Why not speak up?” At the same time, I had been divorced and I was in my own personal funk. I had come to New York because it was the right thing to do for the business of show but I had two young children in LA and it was a crazy time. I kept thinking, “Why am I here? It’s not going at all the way that I planned.” It was so painful. Everyone got nominated for a Tony in that show except me. I thought, “This is what I came back to Broadway for?” But I met the man I am still married to today. He turned out to be my green glass love. That’s how I look at that experience.


Lord have mercy! Now that was another trip. The First Wives Club was difficult from day one. I got a call asking if I was interested. Once again I’m in California and I say, “Very cool. Ok. What the heck?” And I always loved that role. I thought, “How brilliant that they will cast that as a black woman.” Well, it was just difficult. Sometimes you have to go deep and sometimes you’ve got to step out of your comfort zone, and it just didn’t seem like it happened like that for a lot of people. To me it was close to that whole Dreamgirls experience and I said, “Look, I am not the whipping post here. Don’t do it to me. I am not having it.” It was very tough to get through but it could have been something really great. I think it’s one of those shows whose time will still come.


This has been my whole career: The Mighty Quinn is the movie right before Denzel became Denzel. We had been friends for some time. His wife Pauletta and I had a small foundation, The LA Children’s Toy Drive. We were delivering toys in the hood. One Christmas, I see Denzel coming up my stairs two at time, and he said, “Have I got a present for you! We’re making a movie together in Jamaica.” I can still see him sitting at the head of my dining room table telling me about the movie we are going to make.


Piece of the Action was my very first film. I was touring the country with the Penthouse Pet of the Year. She wasn’t a singer, so they hired me to sing. We toured the world. I came back, and I had this phone service, and I had a stack of messages from my first acting teacher at the Negro Ensemble Company who was trying to track me down for a film with Sidney Poitier, Bill Cosby, and James Earl Jones. I’m 19 years old, I can’t drive and I can’t rent a car. I got my long lost cousin Mabel to drive me and what should have taken 30 minutes but took an hour from Fairfax to Warner Brothers. I get there and I’m in a room with great talent. I think, “I know who is not getting this role. “ At the end Mr. Poitier had me come back for a screen test, and I’m freaking out because I didn’t know how to get there. But I got there, and there I met a longtime friend of mine, Ralph Farquhar—Executive Producer at Moesha. He told me, “I got your next job. Meet this 14-year-old Brandy. You’re gonna be her stepmother, and it’s going to be a hit.” I love it that we remain friends this long. It was such an amazing time in my life. My first film. At that time, people would say, “This is an Oscar-worthy screen debut…but too bad she’s black. “ I learned so much so young.


I was doing Dreamgirls and a man named Sid Bernstein sees the show—he brought The Beatles to America. He gets it in his head that I should record a song. I literally sat in the window of someone’s living room and recorded “In the Evening”. Don’t ask me why or how. I thought, “This is weird. I’m in a window watching traffic.” To this date, “In the Evening” is remastered and recorded somewhere in the world. It is a huge gay anthem, and a lot of people don’t know it’s me. That video is one of the first videos done. You can see my dear buddy Khandi Alexander  (Mama Pope on Scandal) dancing right in the middle. You think she can act, you should see her dancing back in the day. I wrote the idea for the video. I always loved the idea of Cinderella, and every Cinderella should have a midnight. I keep a version of those red sparkly shoes with me all the time. I have a peep toe version that hangs above my head at Wicked. Something about that spirit, I need to keep it with me. In the evening the real me comes alive.

Don't miss Sheryl Lee Ralph in 'A Diva Simply Singing' at the Metropolitan Room on July 30.