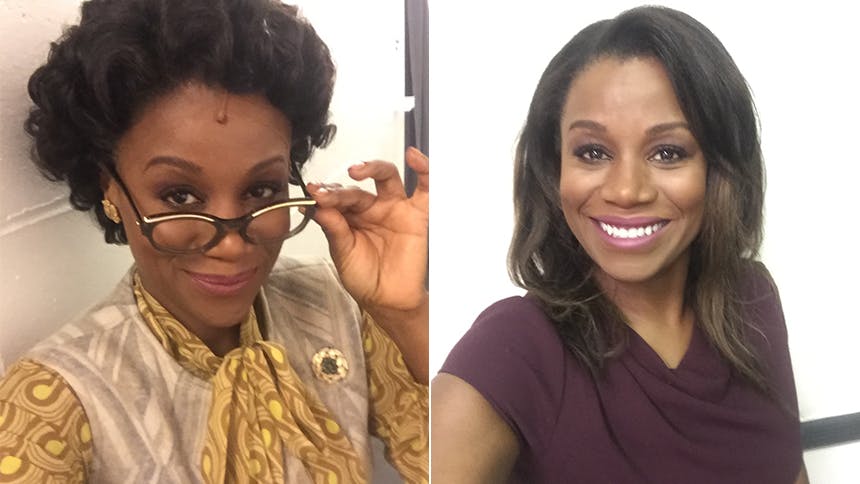 After touring the country with Sister Act, Gisela Adisa makes her Broadway debut in the hit blockbuster Beautiful: The Carole King Musical

. Gisela cracks audiences up as Lucille, the no-nonsense secretary at 1650 Broadway, then wows as the lead Shirelle and "Will You Still Love Me Tomorrow" soloist. Scroll on to get to know this standout performer as we talk Beautiful, horrifying dance calls, and going extra "fabulous" on tour.


1. My first memory of hearing The Shirelles:
I was as a little kid watching TV—a commercial for one of those "Best of" compilation albums for the 60's. I loved singing all the hooks every time that ad came on. Little did I know, I was practicing to one day be the lead Shirelle!

2. As Lucille, I am serving you:
Some #DryHumor but you better #MissMeWithTheBullshit because in my office I expect #NoNonsense
And throw in a little #LaceFrontRealness thanks to the Hair room
But when you least suspect it, she's down for some #FunTimesAtTheSondheim

3. My first call after finding out I was making my Broadway debut in Beautiful:
After finding out that a simple chorus call was going to pave the way for my debut, I HAD to tell my brother-from-another-mother, Kwame Remy! After that I called my actual brother, Eric.

4. Memory from the Sister Act tour that still makes me laugh:
We were pushing through an exceptionally tough five-show weekend. Sometimes I'd go a little overboard (and over lip lines) with my makeup before the "Fabulous, Baby" reprise dance number. I looked cray cray, lipstick on my teeth and everything... but if it got a big laugh backstage and recharged us for the big finish, it was worth it. And yeah, of course I wiped it off before the number!

5. My favorite thing to do backstage at Beautiful:
Is getting ready for the play. Doing my wig prep, makeup and costumes while I kiki with the cast ...I mean, we get paid to play pretend, which still has me saying, "What is my life?"

6. Costume piece from the show I would totally love to keep and rock IRL:
Umm, I can't say I would rock any of my costumes IRL; Lucille's got some seriously frumpy wool frocks going on and that Shirelles dress is GORGE, but very period.

I adore Carole's Carnegie Hall dress. Put some Swarovskis on it and let's go to the Tonys!

7. My most memorable audition story:
For the final dance call for Beautiful, we did the Locomotion. I was so nervous—here was this "actor who sings", surrounded by Broadway stars and really strong, technical dancers. I was so very extra that day, so much so that I slipped and fell. Everyone clapped (ugh) as Josh Prince (the choreographer!) scooped me up. There was no time for ego or embarrassment because we had to do it again. And...I slipped and fell. Again! In the same spot during the routine. Nobody clapped that time.

8. The cast recording I sang along with most growing up:
Hmmm I'd say it's a tie between Aida and The Color Purple (LaChanze!!!)

9. Role I’m dying to play someday, somewhere:
Tina Turner—hands down. My friends say I sound like her when we sing our fave '80s songs of hers. I grew up singing Tina Turner's music, and I am still so inspired by her story. She started out as a young, impressionable girl with raw talent and became a strong, independent woman, mother and icon. Sounds familiar 😉

10. The biggest mishap I’ve ever had on stage:
Was during the Shirelle reveal, when we change from one costume to the pink dress in seconds, a moment before I sing my number, "Will You Still Love Me Tomorrow". One night while the "magic" was happening, a Shirelle's heel got caught on her dress. She flung her shoe off in a bit of a panic and it hit me—POW! Right in the kisser. I assumed I might be bleeding and possibly horrifying our audience, but they were all smiles so it was all good! I did have a chipped a tooth though 😁


Get over to Broadway's Stephen Sondheim Theatre to see Gisela Adisa in 'Beautiful'.