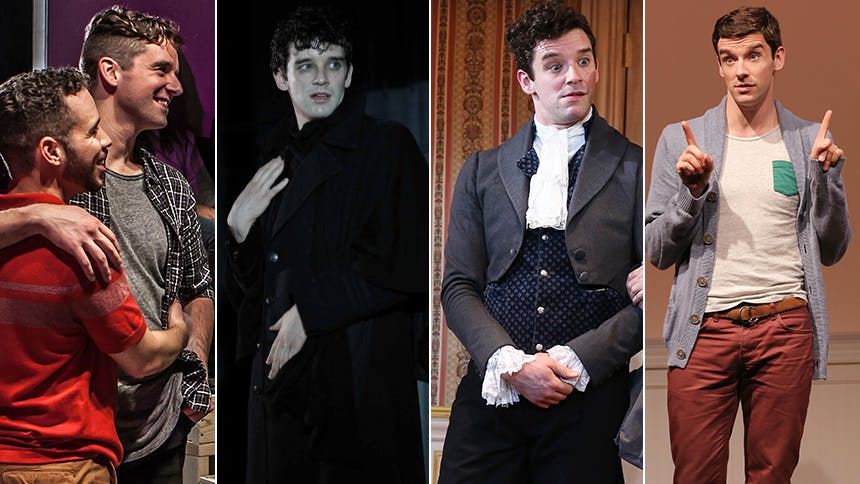 In New York, there is an elite group of stage stars that have the name recognition and reputation to sell a run above the title—not movie stars but true Tony-winning stage folk, like Bernadette Peters, Patti LuPone, Audra McDonald, and Nathan Lane. While these stars are singular talents and no one likes to be compared to someone who came before, Michael Urie is making the smart kind of career decisions that put him on the path to become Lane’s successor as the King of Broadway.

After finding success on TV as Marc St. James in the comedy Ugly Betty, the Juilliard-trained Emmy nominee began building an off-Broadway resume that quickly established him in a league of his own. Urie made his debut in The Temperamentals, winning a Lortel Award for Outstanding Lead Actor and a 2010 Theatre World Award. Then he stepped into the iconic and demanding role of Prior Walter in the off-Broadway revival of Angels in America. Next was a classic turn in The Cherry Orchard and a Broadway debut as Bud Frump in the musical How to Succeed in Business Without Really Trying. Then came the breakout stage performance: Urie led Buyer & Cellar, a solo show that became the talk of the town and won him a Drama Desk Award for Outstanding Solo Performance and a Clarence Derwent Award. His fun, effortless performance accomplished that oh-so-rare feat where he transcended beyond performer and felt truly like a friend that you as audience member have a relationship with.


After the success of Buyer & Cellar, Urie starred alongside Patti LuPone in LCT’s Shows for Days. Then he pivoted a bit and directed the acclaimed solo show Bright Colors And Bold Patterns, proving once again there is no pigeonholing his talent. His heartbreaking performance opposite Robin de Jesus in Labyrinth Theater Company’s intimate production of Homos, Or Everyone in America was a jolting reminder of just what a chameleon he could be. It was restrained realism at its finest, which juxtaposed alongside his current gig in The Government Inspector is pretty mind-blowing. In The Government Inspector, Urie displays his gift for physical comedy and his undeniable star quality. There is a drunk party scene in Act One that those who see him perform it will remember fondly when he inevitably takes his place as a marquee name on Broadway. It’s in this diverse off-Broadway resume, that Urie shows a gift that could only be compared to stage titan Nathan Lane—a five-time Tony nominee whose stage career knows no limit and who can seemingly do it all…and do it well.


Next up for Urie is the starring role of Arnold Beckoff , a drag performer trying to find love in 1979 New York in the first-ever New York revival of Harvey Fierstein’s Tony-winning breakout piece Torch Song. It’s a super high-profile performance that could prove a game-changer Urie. Then after that limited Second Stage run, Michael Urie goes on to play Hamlet for Shakespeare Theatre Company. He’ll be the final Hamlet for retiring Artistic Director Michael Kahn, who taught Urie at Juilliard where Urie picked up the  2002 John Houseman Prize for Excellence in Classical Theatre. It seems there is no limit to what Michael Urie will show theatre audiences—and I, for one, am ecstatic.

See Michael Urie in The Government Inspector at New World Stages through August 20 then in Torch Song at Second Stage beginning September 26.