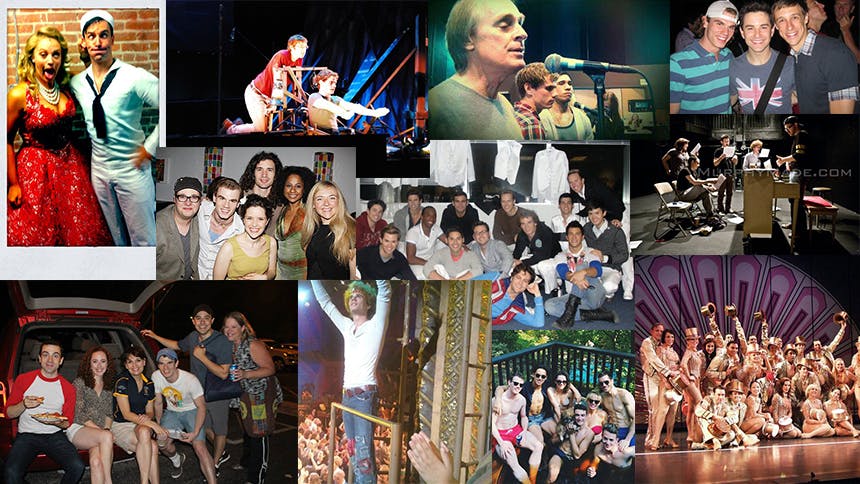 Broadway favorite Jay Armstrong Johnson is shaking things up as Will Olsen on TV's super-hot drama Quantico, and this summer he's starring as Billy Lawlor in 42nd Street at The Muny.

But between gigs, he's making his long-awaited Feinstein's/54 Below debut on April 27, 29 & 30 with an eclectic solo show of pop, rock, gospel and Broadway...there might even be a live album of it.

Scroll on as JaJ shares with BroadwayBox his Broadway scrapbook, filled with rare backstage photos and unheard stories. 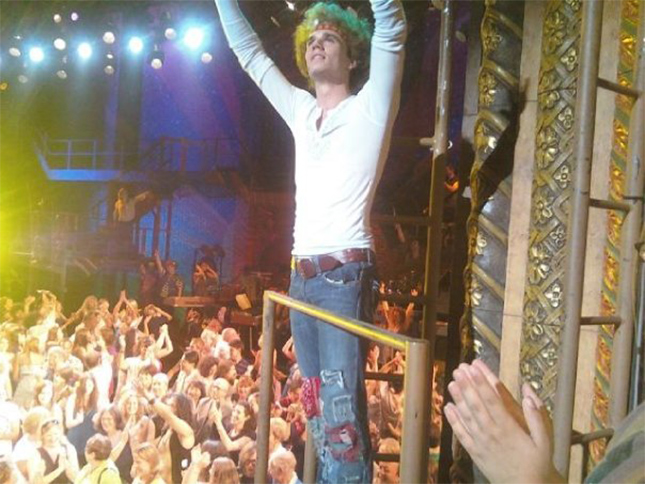 A fan actually took this photo. I missed the audition to be the Claude understudy because I was still out on tour with A Chorus Line; then when I got back to the city they still hadn’t found Claude and as luck would have it I got to audition. I went down to The Public for Heidi and Jordan and I sang my senior showcase song “Why” from tick…tick…Boom! because Diane Paulus asked for a song that tells a story. To be completely honest, I got stopped on the street a lot thanking me for my performance in Spring Awakening—people thought I was Jon Groff back in the day, and I feel like that played into a lot of the reason why I got Hair. Jonathan played it in the park, and I think when I walked in and I just had that vibe, they took a likening to me because it was something familiar. The hair grew as the show went on. 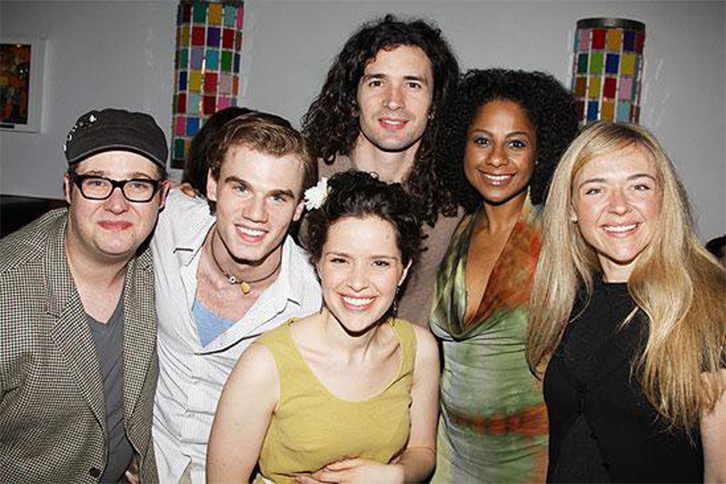 This was the opening night party for the replacement cast when the original cast went to London, and we were all part of the original Tribe that decided to stay on Broadway either swinging or going into new roles. These are the OG B’way peeps.

That is Alex Brightman in the middle, star of School of Rock, and Book of Mormon’s Jason Michael Snow. This is just a party we were at. I found this photo and laughed out loud at how young we looked. It’s the most friend pride [seeing them succeed] because we’ve been doing this together for 10 years. It’s a tough-ass industry and it takes so much persistence and guts and you go through a lot of hardships. I’ve seen these boys go through it all.

This was the sitzprobe at La Jolla Playhouse— Keith Carradine on the mic singing “Used to Be” and me and Hamilton’s Jon Rua in the back. I am from Texas and I was living my hometown dreams hearing the band for the first time. I loved [Hardbody] so much because I got to show up for work and essentially be a heightened version of myself/my family. It was like I came home every day; the people around the truck were people I knew in my life so it was very close to my heart. When it went away so soon it was devastating actually. I was not great for about 48 hours after we got our closing notice, then On the Town happened pretty much right then. 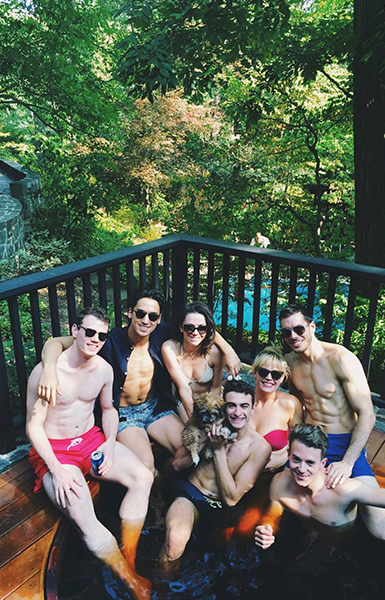 This was actually a pool party Michael Rosen (who was understudy for Tony Yazbek in On the Town) threw at his parents’ house upstate. Michael has his arm around me, Megan Fairchild and Elizabeth Stanley are in the middle, that’s Ricky Ubeda holding Alysha Umphress’ dog, and Brandon Leffler to Elizabeth’s left and Mikey Winslow below him. This was at the end of On the Town, and we had all became such good friends by then. It was such a hard show for every single person physically. We felt like we were in war together sometimes—we’d dance that show and sing that score eight-times-a-week, and that was so grueling. It brought us together as a group. And the nature of the show, being fun and goofy, brought us all together as well.

Elizabeth Stanley and Clyde Alves are actually two of my favorite humans on the face on the planet. This was backstage at Barrington Stage Company during the out-of-town try-out. They are just being idiots—being Clyde and Elizabeth. And now Clyde’s a dad—the sexiest of the dads—and Elizabeth is off being a star in The Bridges of Madison County. 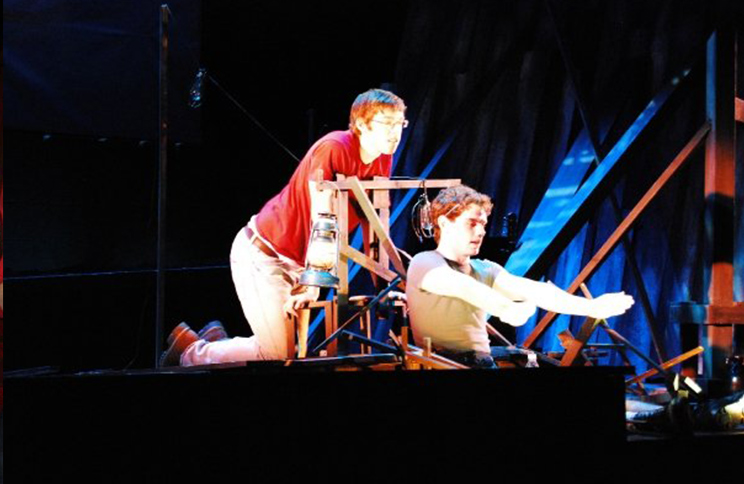 That was Floyd Collins my junior year at NYU. It’s my number one favorite theatrical experience I’ve had in my life thus far, in terms of the role. It’s the show that keeps following me around—because it was at NYU a lot of industry people actually saw it. I’m a dancer so I’m used to using my body to tell a story and Floyd was the first time I wasn’t able to do that. I was stuck in a cave only able to use my voice and my face, so it was a really, really challenging role and one that I miss a lot. Nic [Rouleau] and I were best friends in college, and now he’s a mega-star himself. 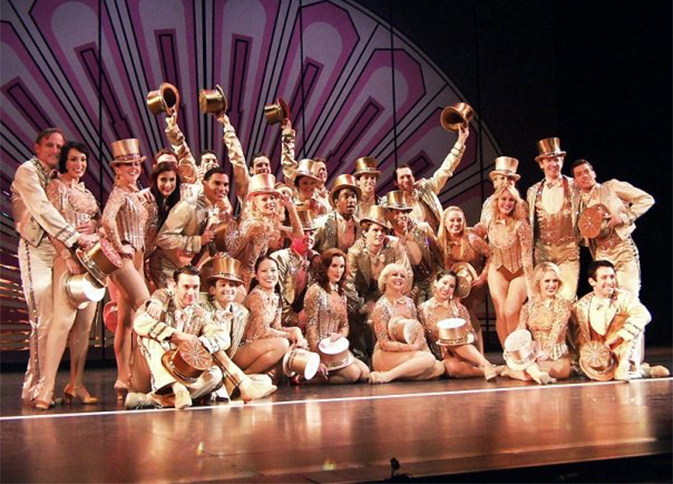 I had just played Floyd and it was my junior year at NYU. I was skipping school to go to Ripley-Grier to dance for my supper once every three or four months for a year and half auditioning for a Broadway replacement in A Chorus Line. I was 20 years old when I got the tour; I dropped out of school; and I got it without an agent, which was great for my morale. I really love the role of Bobby because he’s the weirdo—he told the weird stories and he didn’t give a f#ck. He’d be the character I end up playing in my 30s.

Rob [McClure] and Beth [Leavel] are two of the best humans on the planet—Rob and I are like besties now essentially. He called me when the release went out about Bette saying we have to get into this. I love The Muny—it’s summer stock Bikram theatre realness. I worked there four years ago doing Pirates of Penzance with Hunter Foster, and that’s where I met my boyfriend subsequently; so I met my love at The Muny. Two years later, here I am doing Dolly with these crazy people. It’s always my favorite summer get away. It’s theatre you will never ever get to do again—you’re looking at the moon and there’s 11,000 people in front of you. You don’t get those experiences anywhere else.

This is us waiting around on set of my first movie, Sex and the City 2. The 12 of us were hired as the gay men’s chorus, and it was maybe one of the coolest two weeks of my life. I still haven’t seen the movie. I was never a Sex and the City guy. I feel like I’m one of the only gays who lived in New York who wasn’t obsessed with Sex and the City. I was more of a Will & Grace humor. I guess I’m just too Texas. 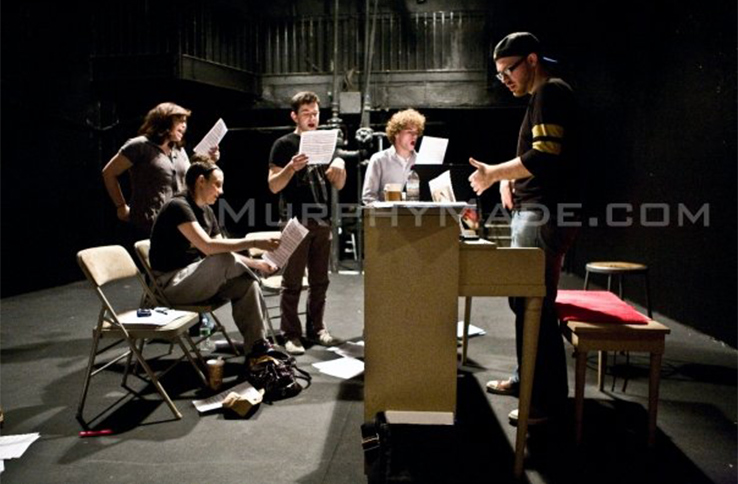 That dude [RSO] blows me away, and I’ve known him for like eight years now. We met at NYU; he was brought in as a composer for our New Works Program and he was auditioning people to be part of his show Alive at 10. I wanted his show so badly—it was so good and his music was so edgy (you never got a rock-pop score in Steinhardt School of Music) — but as luck had it, it was the same time as Floyd Collins. But I got far along in auditions for Alive at 10, and he kept calling me asking me to be part of demos, or work on this project of his, or sing this of his. He calls me one of his muses, which makes me gag a little bit because I think he’s one of the most prolific and brilliant musical theatre writers out there right now. I’m obsessed with him. He’s genius and twisted and has his own voice.

Newer
Hot Clip of the Day: Allison Guinn Takes Audiences to Appalachia to Meet Her Special Grandma
Older
20 Questions in 2 Minutes with An American in Paris Star Garen Scribner