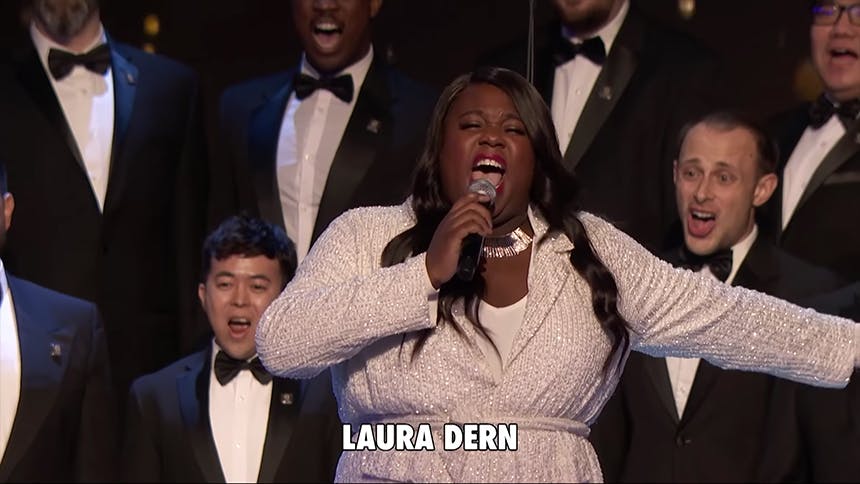 Alex Newell damn near broke the internet this past Oscars weekend. The Once On This Island showstopper teamed up with the Gay Men’s Chorus of Los Angeles at the Independent Spirit Awards for a musical retrospective of gay moments in film from this year, which ended with a serenade of (now Oscar winner) Laura Dern. If you somehow missed the viral video clip of Alex taking it to church while singing “Laura Dern”, indulge below.


Alex is about to appear at Carnegie Hall on February 14 with the New York Pops for their I’m Every Woman concert. We caught up with the star of TV’s Zoey’s Extraordinary Playlist to find out how that Laura Dern moment came to be:

“Aubrey Plaza called me, and I said, ‘How do you have my number?’ And she said, ‘I’m a spy.’ Then she asked if I would do the tail end of this idea that they had for the Gay Men’s Chorus. She said, ‘It’s like what Billy Porter did in “Beauty School Dropout” in ’94.’ And I said, ‘I’m sold. I’m in.’ She said, ‘All you have to do is scream Laura Dern.’ And I said, ‘Great! That sounds so easy.’ And now we’re best friends. Laura Dern is every woman. She’s all in me.”

Check out Alex in rehearsal with Mandy Gonzalez and Carrie Manolakos performing “(You Make Me Feel Like) A Natural Woman”, and don’t miss them live with the New York Pops at Carnegie Hall on February 14.