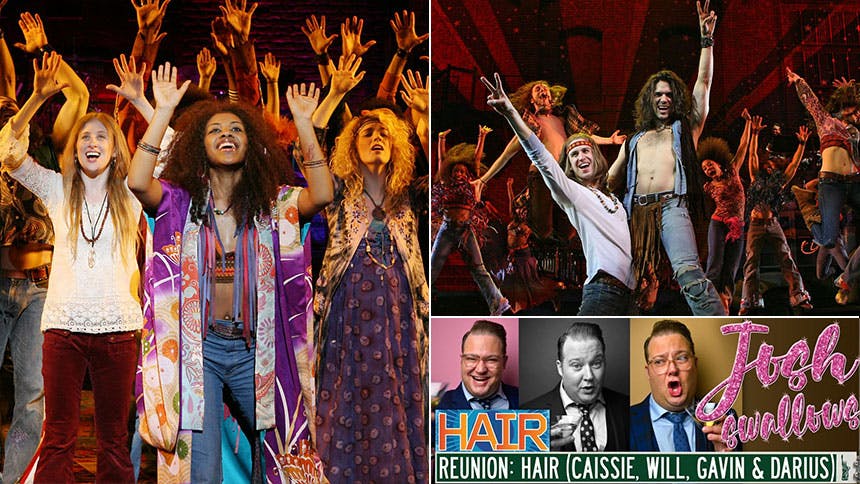 Tonight, Wednesday, March 25, at 9 PM, Broadway treasure Josh Lamon (Groundhog Day, The Prom, Emojiland and the podcast Josh Swallows Broadway) hosts a reunion for the Tony Award-winning 2009 Hair revival featuring Gavin Creel, Will Swenson, Caissie Levy, and Darius Nichols. The tribe joins Josh (who was a swing/understudy in that production) as part of the virtual Broadway Podcast Network Town Hall, and can be viewed on their YouTube.

Tomorrow night, March 25th at 9pm EST, #JoshSwallowsBroadway is going live with a HAIR reunion! Join me, @caissielevy, @gavincreelofficial, @dnphotographynyc and #WillSwenson as we laugh, tell stories and spread some much needed love while we have too many Quarantinis. Via www.bpn.fm/townhall


In anticipation of the event, let’s revisit a dozen of our favorite videos from that Diane Paulus-helmed, Public Theater production of Hair. (Also, revive it again when this is all over.)


“Going Down” from the Broadway Broll


“I Got Life” on Good Morning America


“White Boys” in the theatre


“Easy To Be Hard” from the Broadway Broll


“Where Do I Go” from the Pre-Tony Awards Concert


“Let the Sunshine In” on Letterman