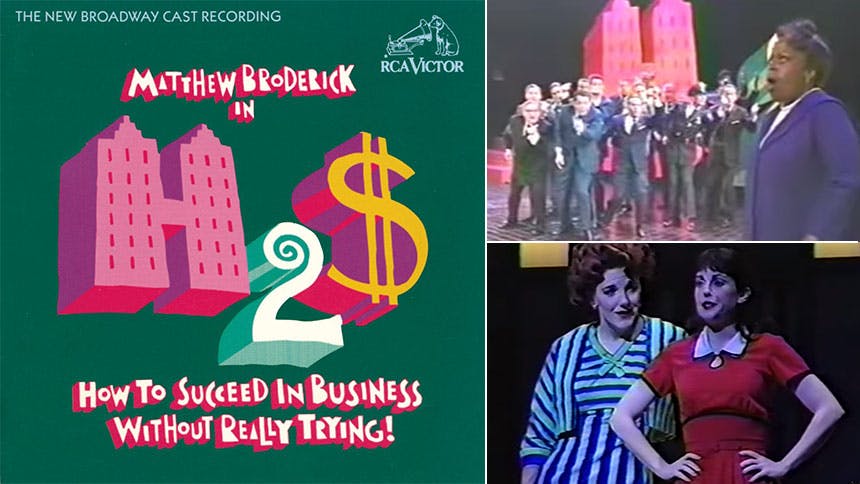 There are major Broadway revivals that remain a benchmark for ardent musical fans even decades later: Nathan’s Guys & Dolls, Patti’s Anything Goes, Tyne’s Gypsy, Rosie’s Grease, and the 1995 revival of How to Succeed in Business Without Really Trying, which opened on this date at the Richard Rodgers Theatre in 1995. The production (which lost to Best Revival Tony Award to Hal Prince’s stunning Show Boat) played 548 performances and Matthew Broderick won a Tony Award for Best Actor in a Musical for his portrayal of J. Pierrepont Finch.

Directed by Des McAnuff and choreographed by Wayne Cilento (both of whom received nominations for this), this H2$ starred Broderick, Megan Mullally as Rosemary, Victoria Clark as Smitty, Jeff Blumenkrantz as Bud Frump, Lillias White as Miss Jones, Ronn Carroll as J.B. Biggley and, in a pre-recorded performance, Walter Cronkite as the Book Voice.


Thanks to an iconique cast recording from Masterworks Broadway and some choice YouTube videos, the production lives on. Here are five moments from the H2$ ’95 revival, we still find ourselves obsessed with 25 years later—and shocker, it’s all about the ladies!


This “Paris Original” is the ultimate one to sing along to because all the ladies are serving such vocals and the orchestrations just dance along with you as you move around the room. Megan Mullally is carrying the song, obvi, but then when ensemble member Kristi Lynes comes in with her “I’d like to speak to a manager” verse at 2:44-2:59, it’s the cast recording equivalent of a death drop. #StillObsessed


Listen, the Tony Awards performance won’t play in screen, but just open it in another window, because no other version of this song does Lillias White justice. First, let’s give the guys their justice. This number is a bear and they are delightful—peak Broderick, truly. But friends, from 2:14 through the end is next level magical. This is why we love Broadway. Here’s Lillias White (future Tony Award winner) in a small featured role making herself the most memorable part of this entire revival. When you think of this, you think of her reinvention of Miss Jones. Lillias is giving audiences a religious experience, and in some ways it’s feminist AF to have Lillias and her girls be the biggest and best part of this “Brotherhood of Man”. #AlwaysObsessed

Victoria Clark’s Comedy in “Been A Long Day”


Okay friends, we are in the boot section. Another future Tony Award winner, Victoria Clark makes a meal of her featured role as office secretary Smitty. The dry delivery of her “Been a Long Day” is a comedic masterclass. In a big cartoonish revival, she’s playing it as the most relatable person in the room, and it’s great. When has this number been so enjoyable? The highlight, of course, being Vicki throwing down her newspaper at 2:05 and giving us a taste of that voice. Also, Megan’s “make a date” after. This is musical comedy gold.


When watching this (or listening to her “Freddy My Love” from that epic Grease revival), doesn’t it make you wish you could see what Megan Mullally’s musical theater career could have been if she hadn’t become TV royalty? (I hope we still see her Desiree in some Night Music. ) Come on, 2:30-2:47, with that crystal clear belt.

Matthew, Megan, and Jeff Blumenkrantz in the "Act One Finale"


The vocals and orchestrations in Matthew and Megan's "Rosemary" are worth a listen, but this reprise that ends at Act I is truly next level. Megan's line readings are so clear you can see this performance just by hearing it. And when she does "what ever happened to Rosemary" beginning 60 seconds in, it's a mood, a ringtone, a lifestyle. What an act break.