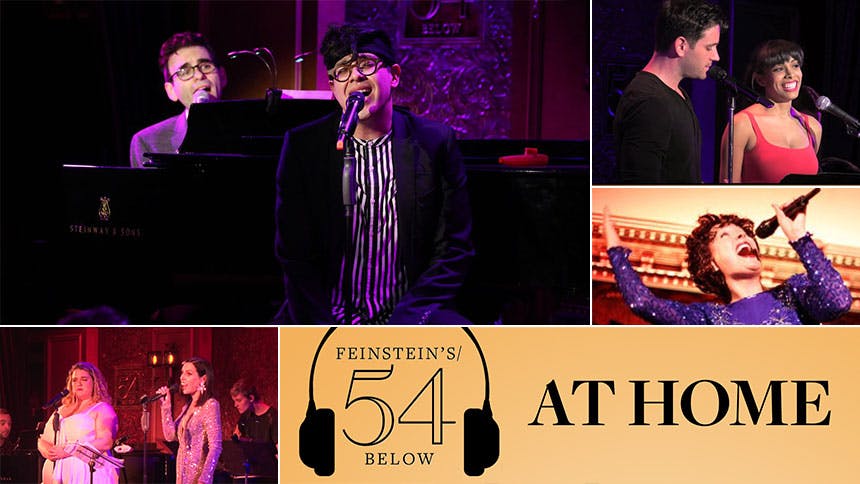 What does New York’s hottest cabaret spot do when the COVID-19 pandemic prevents audiences from filling into the basement of Studio 54? They take their act online and bring concerts to the musical theatre fans who need it most right now. Feinstein’s/54 Below announced today their new #54BelowAtHome series.

Feinstein’s/54 Below brings Broadway’s living room to your living room as they head into their archives and stream past concerts that were recorded at the club. The concerts will be streamed on their YouTube channel as one-night-only events(so if you miss it, you’re out of luck!) beginning on Wednesday, March 25 at 6:30 PM with Joe Iconis and George Salazar in Two Player Game.


The acclaimed concert features the creator of Be More Chill, Joe Iconis, and his breakout star, George Salazar. The sold-out hit was recorded as an album by Ghostlight Records, and now you can experience it from home.


Scroll on for a look at some of the other concerts scheduled to stream on Feinstein’s/54 Below’s YouTube channel. I HIGHLY recommend setting a calendar reminder for the Bright Lights, Big City 20th anniversary concert stream Friday, April 3 at 6:30pm


More titles will be announced. Check #54BelowAtHome site for updates.

Newer
Celebrate the Life of Four-Time Tony Award-Winning Playwright Terrence McNally By Watching His PBS Documentary, Every Act of Life
Older
Brush Up On Your Shakespeare with Sir Patrick Stewart & His #ASonnetADay Instagram Series
Sign up for BroadwayBox Discount Alerts