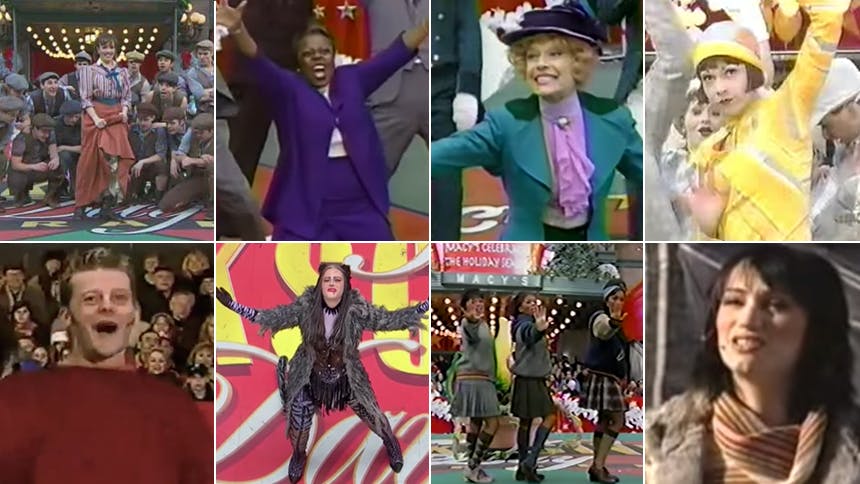 
Big sigh for low-def TV, but even that can’t dim Sutton Foster’s star quality and the joy of this opening number.


I can sense the eye-roll but these kitties kill it. They are all athletes; ALW wrote a major earworm with that opening; but, most importantly, it’s the intro to Mamie Parris’ one-breath “Memory” and that is legend-t (with a t!). When the camera catches her from above as she belts (2:50). Your favorite would and could never.

I couldn’t choose between Denis Jones’ dance extravaganza—those jump ropes, hello!?! —and the vocal pyrotechnics performed by DeQuina Moore, Trisha Jeffrey, Carla J Hargrove, Hunter Foster and, of course, Kerry Butler. Killer dance or vocals that slay? There’s no easy choice, so you get both.


Young Jeremy Kushnier in his B’way debut, this athletic A.C. Ciulla choreo, and that fierce style of belting that was all the rage then—no wonder this clip is cannon for theatre kids in the late ‘90s.


When Lillias White and her Miss Jones get her life, I get mine. The guys look and sound great (Broderick is super adorbs), but this is her show. 3:35 to the end is what I’m thankful for this year and every year.


Nothing but respect for OG Dolly.


Let’s be clear, this is essential for Billy Porter’s Doctor Zhivago-realness moment in the white faux fur that is not part of the Broadway musical but is part of this epic clip. Also, bringing this message by this group of people into America’s living rooms on Thanksgiving morning is what theatre is about. I wish NBC or FOX would do Kinky Boots Live! so everyone can get this show right now.


Who can ever forget seeing Kara Lindsay and her dancing news boys on that parade?? The show had played Paper Mill but hadn’t reached Broadway yet and this was the first slice of heaven that they offered to fans, and boy did it deliver. That Tony-winning Christopher Gattelli choreo. Controversial, but this is my favorite video from the Broadway production of Newsies.


Honestly, there's so much to love about this clip: the wind in Eden Espinosa’s hair like a fan on a Mariah Carey album shoot, or the insane high notes flying out her mouth at God knows what hour in the morning outside under a bridge. The song gets cray around 2:03, it's next level at 2:39, and I'm dead and need to be resuscitated by 3:25.

Huge shout-out/thanks to BroadwayTVArchive on YouTube for preserving many of these clips.

Newer
ICYMI: Watch All the Broadway Musical Thanksgiving Day Performances from 2018
Older
The Illusionists Star and Famed Magician Darcy Oake Wows Us with a Card Trick