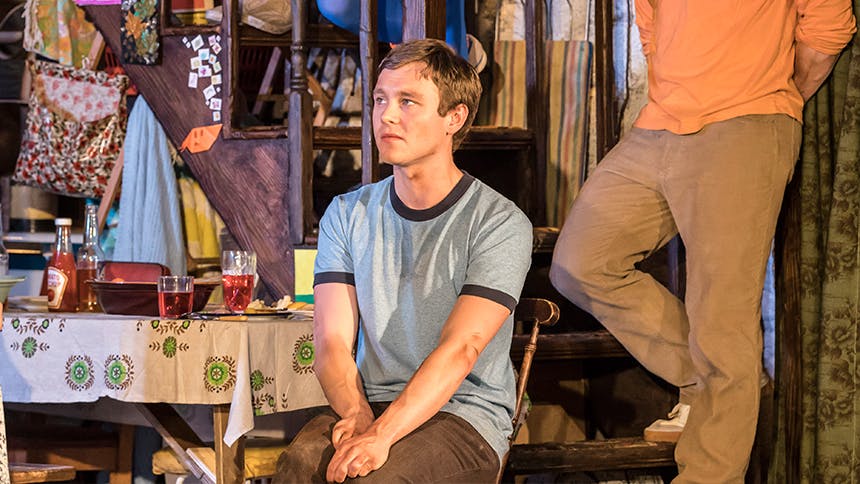 . Rob originated the role of the emotionally fragile young man in the play's world premiere at the Royal Court Theatre and West End production. BroadwayBox caught up with the Irish actor to discuss his big debut, how he and company handle two-show days, and a new layer to the relationship between Oisin and Tom Kettle.


1. Tell me about the moment at the end of the first act with you and goose. What is happening for you in that moment? What did Jez Butterworth or director Sam Mendes say to you to inform what’s happening there?
I suppose that moment kind of really starts just prior to the end of the act. He overhears his mother and his uncle in the kitchen, and he learns something that completely turns his world upside down. So then, moments later, when the goose is brought onstage at the end of the act, he's faced with the physical image of death. I know for me, it’s definitely safe to say that he's heartbroken really. Any lingering hope of a normal family life is entirely extinguished.

2. How has your performance changed, adjusted, or grown since the UK run? Was there anything new you found while revisiting the piece for Broadway?
Well I think there is always a slight trepidation when you're coming back to something having had a number of months away from it. I know personally, I was slightly worried that we'd just be expected to churn out the same performance that we've done before. But thankfully, I couldn't have been more wrong. Sam [Mendes] did his best to give each of us a fresh perspective on our characters, and I think that is really evident in the play. It’s definitely not the same show as the one that we did in the West End. It’s grown. It’s richer even.
What did Sam give you about your character this time?
He is very, very nuanced. He'll say something extremely small. One day he said to me that Tom Kettle and Oisin are the only two people in the household that feed the animals. Then that makes you revisit my relationship with Tom Kettle. They obviously spent a lot of time on their own together and that they're quite close. It just deepens the relationship a little bit more.

3. On screen, you played Thorgrim on TV's Vikings. What was the most memorable experience on set?
Vikings was a lot of fun. Like The Ferryman, it was a very close knit group of actors, and I think for any story at all to be in any way successful, the actors have to really believe in the storyline. But my favorite part: I had a knife fight in front of a burning temple. That was a lot of fun. I love all that action-type stuff. I felt like such a badass. Any chance I get to do that, I'm extremely happy, and I would love to do more of it in the future as well.

4. The Ferryman is so epic and emotional. What’s it like for you and the company to perform it twice on two-show days? What’s your in-between shows like?
Wednesdays and Saturdays are definitely tough. Over here, we have a much longer break in between shows then we did in the UK, and that has its pros and its cons. Sometimes after the matinee, you feel like you could actually start the second show straight away. Then there's other times where you’re just completely knackered, so the long break is an absolute Godsend.

A lot of sleeping goes on. Some people don't even get out of their costumes. Some people go to the gym. If at all possible, I like to get home and sit on the couch in front of the TV for an hour and have a proper switch off, so it kind of feels like you are starting your day again when you have to gear up for the second show.

5. In what ways is making your Broadway debut in a hit show different than what you could have imagined and exactly like how you’d have imagined?
To be honest, I really tried not to build it up in my head of what this experience was going to be. Because of the success of the play in the UK, it could have been quite easy to get ahead of myself, but I was adamant on taking it day by day. But in short, it’s just been incredible. I'm constantly in a state of pinching myself and just trying to enjoy every second, because this is the type of thing that could very, very well be a once in a lifetime opportunity.

I firmly believe that the people make the experience what it is. Some of my closest friends in the world are onstage every night. That to me is the most special thing—that, coupled with the response that we get from the audience night after night. I can't think of anything more rewarding.

Don't miss Rob Malone in 'The Ferryman' at Broadway's Jacobs Theatre through July 7.