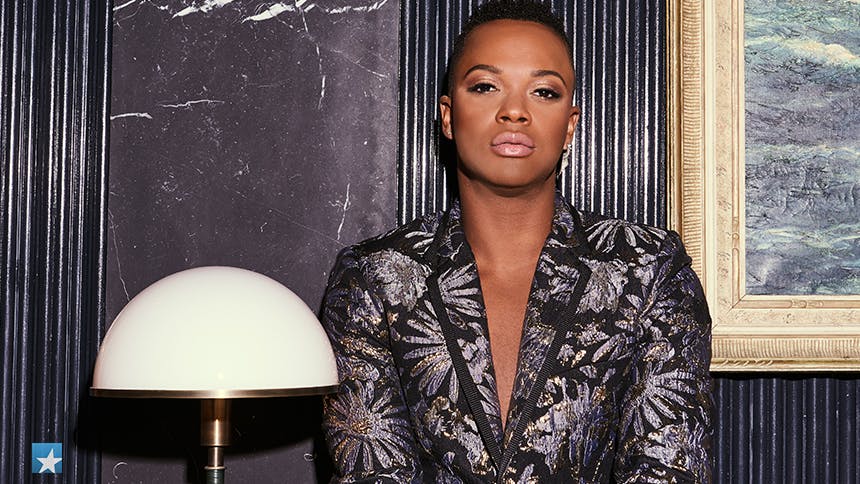 BroadwayBox and photographer Jenny Anderson launch a new photo and interview series this fall spotlighting 10 current Broadway musical replacement stars whose performances left us stunned in our seats! The illustrious group (ranging from title stars to scene-stealing co-stars) was shot at the beautiful West Village restaurant The Spaniard. Next up is J. Harrison Ghee, who makes his Broadway debut reinventing the Tony-winning role of Lola in the Tony-winning hit Kinky Boots

. His performance is hilarious yet grounded; his dance is fierce AF; he has a huge voice; and his stage presence is nothing short of mesmerizing. It's no wonder he's the people's Lola.

1. Tell me about your journey with Kinky Boots, from your introduction to the musical to booking the tour in 2014 to your incredible Broadway run, which ends in being the final Lola.
My first interaction with Kinky Boots was seeing a breakdown for it while I was working on a cruise ship. A lot of my friends were like, "This show is so meant for you, you have to do it!" But I was out at sea. When I finally got off of the cruise ship, they were having auditions for the tour. I went into Telsey auditioning for Motown, and I dropped off a headshot, resume, & cover letter to Justin Huff wanting to be considered for the tour. They brought me in that weekend. I didn't realize it was final callbacks, and I still hadn't seen the show yet!

I booked the tour as a swing and the Lola understudy. The first year of tour, I was swinging and assistant dance captain, and then our original Lola on tour (Kyle Taylor Parker) left, and I re-auditioned, and they let me be Lola full-time on the road.

I was on the road for a year and a half as Lola. One day, Jerry Mitchell was checking in on the show in San Jose, and came in my dressing room and said, "If you want to, we want to take you to Broadway." And I was like, "Of I want to? What kind of question is that?!”


2. How did you go about creating a Lola that was distinctly your own?
I drew from my experience because I'm a drag queen in real life. I've been doing drag since I was 21, and so, it was just a matter of drawing from that experience. Then, my father as a pastor in North Carolina, so it's so close to my real life. Even some of the lyrics, I was like, "Who was following my life?"

3. Is it harder or easier when your character is that connected?
Starting out, it was a lot harder because being vulnerable and allowing yourself be so naked is hard. It took a minute to settle into it. Then I finally realized I could start using the show as my therapy. I would put my message into the show and get it out. It's really built my relationship with my father and we've come such a long way.

4. Has he seen the show?
Oh, you can't shut him up now. He's seen it about six or seven times.


5. Finish this thought: My Lola is ____.
Literally the first thing that came to my head is, "My Lola is everything." Because she is! That's what I strive to show people—that Lola is just like everybody else. She's got feelings, she's got emotions. It's dealing with personal issues, and identity. Even in having so much confidence, there's that vulnerability of showing the other side. I can be onstage and in the spotlight, but at the same time, there's that inner turmoil, and there's inner demons and things to work through.

6. This series is about replacement performances that left us stunned. What’s a performance you saw as an audience member that left you stunned?
Audra McDonald in Lady Day at Emerson's Bar and Grill. It's the one time I sat there with my jaw on the floor the entire time. From the moment she walked out and set that glass on the bar, I was like, "Let's go! I'm here for a show." That's the one time I've watched a show and been speechless.


7. When Kinky Boots ends its Broadway run, no doubt it will be licensed around the country, in schools, and around the world. What would you want future Lolas to know about this character?
Be yourself. One of the things that Jerry Mitchell said to me during one of our first times he worked with me in an understudy rehearsal was that Lola's strength is in her smile. He never wanted us to be fierce and hard—it's all about being welcoming and inviting. I've always carried that, her strength is in her smile, in her happiness.

8. One very unique thing about your gig is that you keep getting new Charlie Prices to play opposite. What is that like for you? How does it affect what you do?
Oh, it's fun. I get to find new moments in my Lola because of the Charlies. How they affect me, how they approach their Charlie, I get to act accordingly, and it's fun.


9. Having been with this show and this role for years, what's your process for a long run? Lola is so energetic and extra, how do you sustain?
I approach her however I feel that day. I don't try to have a set feeling or vibe or energy. I listen to completely different music every day. Every Sunday is Gospel Sunday in my dressing room, so those kinds of things dictate her energy for the day.

10. Finally, Kinky Boots has about 11 original cast members still with the show after five-plus years. You're a long-time Lola that keeps coming back. What is about the show or life at the Hirschfeld that makes people want to stay?
It's such a home. It really is. It's such a safe place. You go in there, and you know those people. It's a home of unicorns, because everyone in that building is so unique, and so special. We acknowledge that about each other and we celebrate that in all kinds of ways.

Coming from tour to Broadway, I was intimidated because it was my Broadway debut, and a lot of those people are original people. I was so prepared to come into a Broadway cold shoulder. People just being like, "Yeah, come on in. You're another Lola. Who are you?" But everyone was so welcoming and so inviting. It’s a family.


Hurry over to Broadway's Al Hirschfeld Theatre to see J. Harrison Ghee in Kinky Boots. He's there through January 10 and then returns beginning on March 19 and slays through the show's final performance on April 7.

Kinky Boots
Best Priced Tickets
Newer
Introduce Yourself(ie): 10 Questions with Once On This Island Star Anna Uzele
Older
Go Behind the Scenes of the Groundbreaking The Prom Thanksgiving Day Parade Performance with Anthony Norman
Sign up for BroadwayBox Discount Alerts