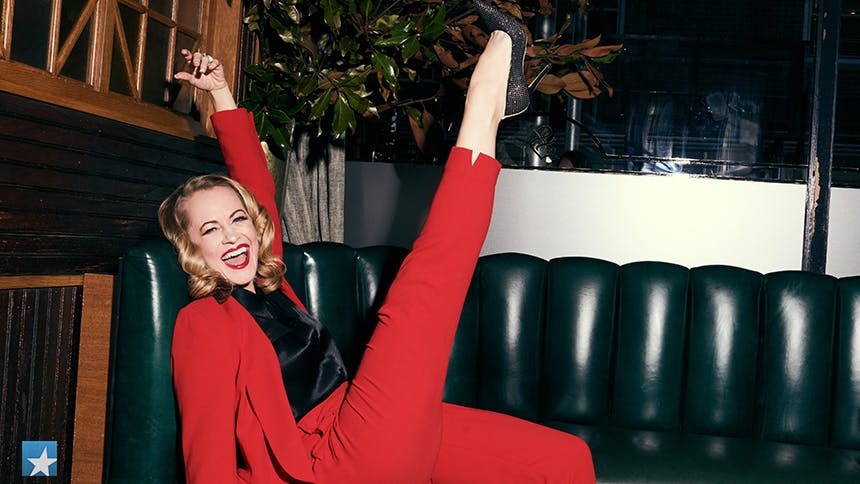 BroadwayBox and photographer Jenny Anderson launch a new photo and interview series this fall spotlighting 10 current Broadway musical replacement stars whose performances left us stunned in our seats! The illustrious group (ranging from title stars to scene-stealing co-stars) was shot at the beautiful West Village restaurant The Spaniard. Next up is the incredible Mamie Parris. After originating the role of Patty in the OBC, Mamie is back in Broadway's School of Rock as Rosalie Mullins, the uptight principal who lets loose during her showstopping Act II ALW anthem "Where Did the Rock Go"—and trust, her rendition of song is instantly iconic (much like her one-breath "Memory" from Cats). Experience her singing it live at the Winter Garden through January 20, 2019.


1. Tell us about your journey with School of Rock, from opening the show as Patty to closing the Broadway run as Rosalie.
My journey started a long time ago when I auditioned for the off-Broadway workshop that they were doing. They actually asked me to play Rosalie, the role I'm playing now, and it was a mixture of many things. We knew that the role was committed when it was coming to Broadway, so my agents and I were a little on the fence about whether to take it as a placeholder. I was also doing On the Twentieth Century at the time, and I was Kristin Chenoweth's only cover, and it was Tony season. So in the end, I elected not to do it, and I thought that was the end of the road with School of Rock.

Then down the road, we had a couple more interactions with casting about it, and, again, I didn't think anything was coming to fruition. Then they called and offered me Patty. They said, "We'd like to offer you the other female role." And I said, “There's another female role?!" (I didn't know! I couldn't see it when it was off-Broadway!) Then they were like, "Yeah, but the caveat is we want you to cover Rosalie." To be honest: even though I love Rosalie, I was done covering. So, I thought about it long and hard, and in the end, I thought, “God, I want to be a part of this new show with Andrew Lloyd Webber. The man's a legend! I want to be a part of this.” So, I got to play Patty, and I found love for Patty. But I've always loved Rosalie.

Then, I was lucky enough to go straight into Cats, which was awesome, and close Cats. Then I went and had other adventures, like a new show in DC. Right around the time the show in DC closed, they called me and said, "Hey, would you like to come back and close out School of Rock playing Rosalie?" I was like, “Yes. What a great bookend to this whole journey.”


2. What was the first thing you did when you stepped into this run as Rosalie? What was your process?
The first thing I did? I tried to see how many of those lines I remembered, and, Surprisingly, it was most of the show. Then it was just making sure I was in vocal shape to do it because, even though it's not a big sing, she's very rangy. She's all over the place, so I wanted to make sure I was ready for that.

3. Finish this thought: My Rosalie Mullins is ____.
My Rosalie Mullins is quirky. She's ambitious but steadfast. She's romantic, but hides it. She's practical. She's smart. She's completely capable, even though she doubts herself. I think at the heart of Rosalie, she's trying so hard to be everything she thinks she needs to be. But underneath she feels a lot like I think all of us do when you're trying so hard to be something you think you should be. You're not really allowing yourself to come out. I think that's where her quirkiness comes in. During “Where Did the Rock Go?”, you discover inside there's this fun, funny, adventurous girl who learned somewhere along the way that in order to achieve her goals, she had to put that aside. I think it's fun to find the moments when that comes out.


4. This series is about replacement performances that left us stunned. What’s a performance you saw as an audience member that left you stunned?
My first Broadway show I was in was the revival of 110 in the Shade, which starred Audra McDonald. So, I had the good fortune of being in the rehearsal room with Audra every day. She's incredible. Since I was a swing in the show and I was not in the show most nights, I actually got to watch. I would say her performance every time left me completely and utterly stunned. The truth that what she was doing on stage is everything I strive to create as an actor. To be able to affect people and move people and tell us a great story, simply by being honest and telling the truth onstage, is what I strive for. I saw all of that in her performance. It left me stunned.

5. What did you feel like was unique to your replacement process coming back into School of Rock this time?
It's utterly unique to have the opportunity to be a replacement and already know the show and the role so well, and everyone in the building. So, in a way it was much easier for me coming into this role than it has been replacing in other roles. In a relatively new show, like I was with Cats, you're coming into a company that all went through the rehearsal process together. They developed their own language, their own method of communication, their own choreography. They're insiders, and you're the ultimate outsider.

I think what a lot of people don't think about is that when you replace in a show, you're not rehearsing with people–it's you in a studio with maybe two people. Then you have a put-in rehearsal, where you get to walk across the stage with real live bodies, and then you're in the show. So it's really on you as the performer to create the world and to create this character. There's no handholding there, and there's no time to develop it. You just kind of have to come in with a bold idea and drive it forward. It's something every performer should do at some point, though it is hard sometimes.


6. The final question is—now having done back to back to back Andrew Lloyd Webber musicals—what would you tell other actresses who are going to lead an ALW musical about the feat ahead of them?
Trust yourself. Just because you're doing something iconic or working with an icon, it doesn't mean you have to be anything other than what you are. You're hired because you bring something to the show that it needs. So, I never tried to make my Rosalie or my Grizabella or my Patty what I thought that it was supposed to be; I brought what I felt the role was to the stage. It's so easy to be intimidated but you have the opportunity to take what the role is and create something new, and be an individual about it. You're a person with a real opportunity to be new and inventive. Find nuance in a character that might not have been found before. It's a great opportunity.


Hurry over to Broadway's Winter Garden Theatre before January 20 to see Mamie Parris in School of Rock.