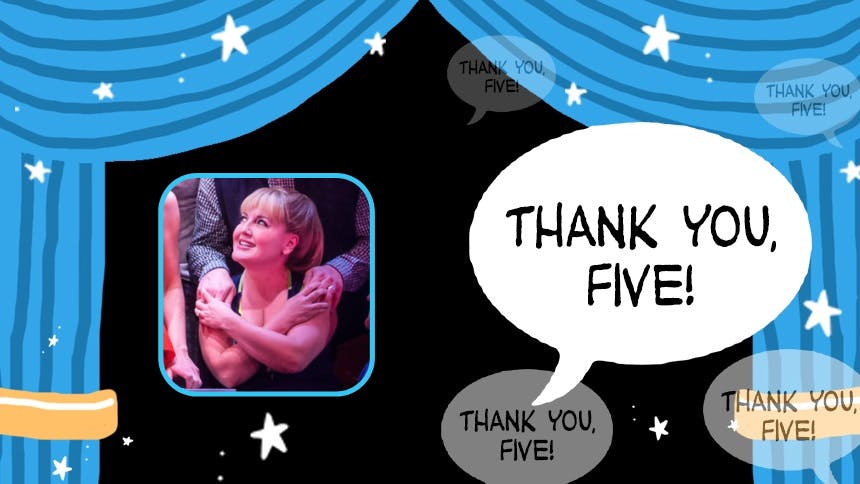 Jennifer Simard has once again made a show-stopping impression earning a second Tony Award® nomination for Featured Actress in a Musical portraying the hilarious Sarah in the brand new Broadway revival of Company, Jennifer's seventh Broadway show.

Katrina Lenk. Katrina Lenk. Katrina Lenk. She is the kindest, sweetest, strongest, most disciplined and nuanced actress and colloborator. She makes every show fun and keeps me motivated because her show is hard. Really hard. She is only off stage for about 90 seconds and while my show is physically demanding, it still can’t compare to what she lifts every night. The fact that she does it with such grace, humility and kindness is an example to us all. Every day. Every show. What a gem. What a leader. What a star.

Unquestionably my husband Brad Robertson. The number of times I have turned him into a set piece while I figure out a new bit…

Bernadette Peters. I think it’s normal for people to aspire to be like those where they “see” a part of themselves. Bernadette has always had that je ne sais quoi for me. While I was aware of her theatrical, film and tv career, the first time I saw her in person was when my late Mom took me to see my first Broadway show Into The Woods. I don’t fangirl much now as a grownup and professional myself but when we did Hello, Dolly! together and she signed my Into The Woods original cast album I had to excuse myself to the hallway to hyperventilate and cry. Embarrassing yet adorable of me, no?

4. We all start somewhere!
What was the earliest performance of yours that was the moment you knew this was going to be what you wanted to do forever? Did you have a role and what was the show?

While I started young, I still toyed with other career ideas. It wasn’t until I was 16 years old that I really knew. I did a local production of Plaza Suite but like many community theatre productions, they spread the wealth and I only did the second scene, the Muriel scene. I know. 16. Inappropriate much? But aside from that, I really felt like a 16 year old Angela Lansbury, a character actress playing much older than her years. It felt so right. Between that and the audience response to the comedy, I thought - “Ooh, I think I might know how to do this.”

Honestly, House Hunters International. I can’t tell you how much joy I get traveling around the world from my couch and judging homeowners who can’t possibly live without two sinks.