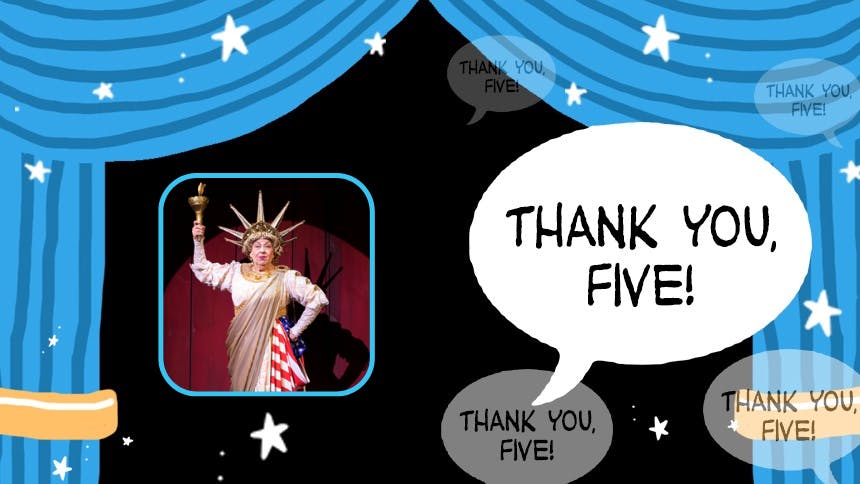 The divine 5 time Tony Award nominated Jayne Houdyshell, winner in 2016 for her work in The Humans, is back on Broadway's as Eulalie Mackecknie Shinn in Broadway's star-studded revival of The Music Man .

My dresser for the show is a fabulous Broadway wardrobe supervisor and dresser with decades of experience named Kathleen Gallagher. My track in the show as Eulalie McKecknie Shinn is very complicated in terms of costume, wig and hat changes. Kathleen masterfully makes sure that I am efficiently dressed and ready with lightening speed, great care, and the utmost professionalism. She also has a great sense of humor and a work ethic that wont quit. I cannot imagine doing this show without her. Matty Wilson is in charge of my incredible wig and hats, and he maintains and manages those changes with extraordinary skills and a great sense of humor and fun. What a team!

I have to say my greatest champion on this production and in all of my work is my dear sister Mary Lou Anderson. She lives in Topeka, Kansas where we all grew up. Mary Lou is not able to travel much so has not seen the show, but she follows it in the press with pride and joy. I love having her support always.

As a child I idolized the wonderful Haley Mills. She was a brilliant child actor who appeared in many films. Seeing a little girl playing amazing roles in films absolutely inspired me to dare to dream of being an actress myself.

4. We all start somewhere!
What was the earliest performance of yours that was the moment you knew this was going to be what you wanted to do forever? Did you have a role and what was the show?

When I was 14 years old as a freshman in High School I took a forensics class. I competed in tournaments in the Dramatic Interpretation category performing a monologue from The Diary of Anne Frank. The deep dive I did in researching the role, and the experience of performing the monologue over the course of an entire semester had me hooked. I knew I wanted to dedicate my life to being an actor.

Being at home with my little cat Lucy. Lucy and I have gotten through the pandemic together. She’s my most constant pal, and I treasure the peace we have in our home together.