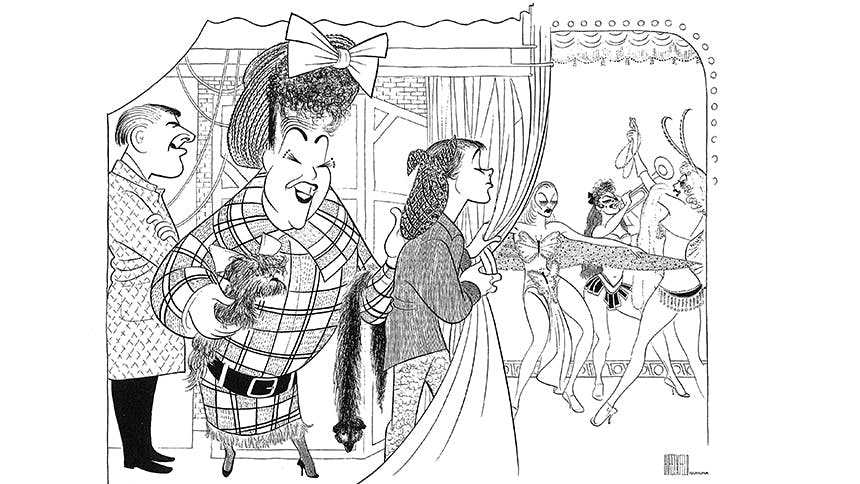 Legendary Broadway artist Al Hirschfeld is having a major moment right now (well, there's a theatre named for him so he's always having a major moment). But right now, Hirschfeld is being honored with a New-York Historical Society exhibition, The Hirschfeld Century: The Art of Al Hirschfeld and a new book The Hirschfeld Century: Portrait of an Artist and His Age (which you can get at the exhibit or online beginning July 7). And get this: nearly 50% of the art in the book will be new to even the hardiest of Hirschfeld book collectors and 40% of the pieces in the show have never been exhibited in America before. Below, BroadwayBox gives you a glimpse of 10 rare Hirschfeld works and excerpts from both the exhibition and the book. 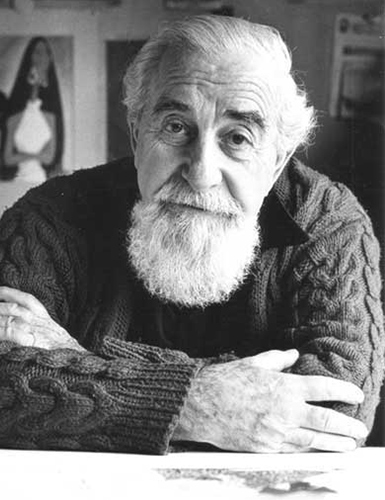 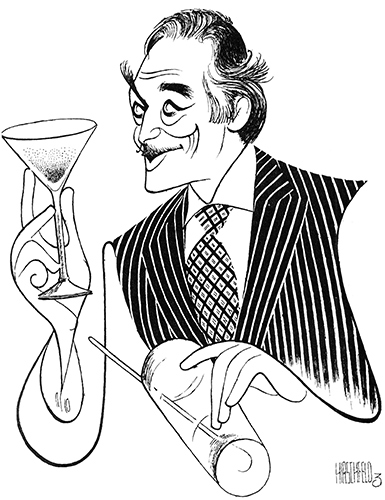 Hirschfeld was a visual journalist who “reported” what he saw, with no interest in picking winner or losers, but looking for character whether it was expressed in word, music or movement, which he would then translate into his signature line. He summed up the equation as “My contribution is to take the character -- created by the playwright and acted out by the actor -- and reinvent it for the reader.” 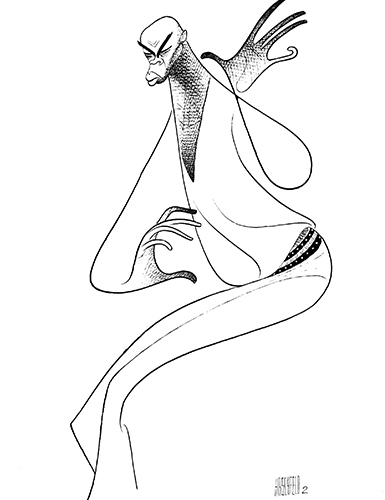 Al had been drawing black productions on Broadway since The Blackbirds of 1928, as well as milestones like Porgy and Bess, Anna Lucasta, Raisin in the Sun, and many others. In the 1970s he documented the rise of African American players and productions such as Geoffrey Holder directing The Wiz. Finally Broadway had caught up with Al, it too was now black and white.

Lemmon was another regular feature of Al’s work in the 1970s, appearing in eleven drawings during the decade, six for his films, and five for his stage work, including one of the masterpieces of the era, a portrait of the actor in 1979’s Tribute on Broadway, drawn to advertise the show. Al captured the casual elegance of Lemmon tipping his hat while holding a glass of champagne and cigarette, all connected by two lines that were his arms, elbows, shoulders, and neck. Lemmon felt that Al got him. “He’s a very distinctive artist,” said Lemmon. “He manages not only to get me, but also the character I’m playing. I’ve never looked at a drawing of his and felt that he missed somebody or he picked a bad moment.” Lemmon’s expressive facial features were easy for Al to utilize in his drawings, and matched, in many ways, only by Lemmon’s frequent co-star, Walter Matthau.

When David Mamet and Ricky Jay came to Al’s studio to pose for a drawing in 2002, it was the night of the opening of On the Stem, a magic show by Jay, directed by Mamet. Their conversation about vaudeville and magic acts, was printed verbatim in the Times with Al’s sublime drawing of the duo. When he returned home, Jay, a man who had seen—and seen through— a lot of wonders, said, “Wasn't that amazing hearing Hirschfeld? A guy like that, you know, he was there, he can remember those stories, a lot of which are really disappearing. It's so important, because he's able to bridge that gap between what Broadway used to be and what it is now.” Al turned 99 five days after the piece was published. He had been drawing Broadway since he was 23.

Sunday mornings looking for NINAs was a custom shared by Times readers across the country, a game played with children and grandchildren. Finding NINAs was an unspoken initiation into the worlds of Broadway, Off-Broadway, and Hollywood. For Hirschfeld, drawing NINAs became second nature, and they appeared spontaneously as he worked, forcing him to count them at the end like everyone else. At a reader’s suggestion, he began with this drawing to put a number next to his signature: it let readers know how many NINAs to hunt for.

Paula Trueman in the “Age of Innocence” number in The Grand Street Follies, 1929 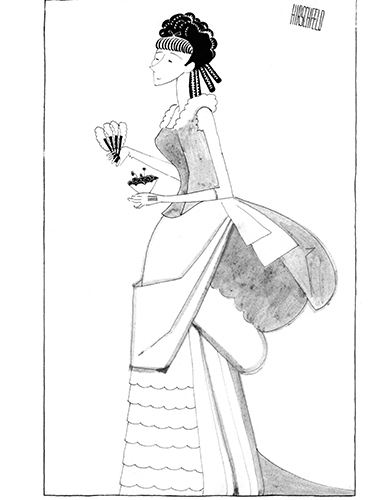 The Grand Street Follies was an annual satirical revue that mostly poked fun at Broadway. Trueman had made her debut in the Follies in 1924, and by 1929 she was one of the stars of the show. For this sendup of Edith Wharton’s Age of Innocence, she sang “His Love,” as she slowly peeled off the layers of clothes a woman wore in Wharton’s era, “revealing the fact that men of that time who might have taken her at face value,” according to one review, “would have been the age’s innocents.” 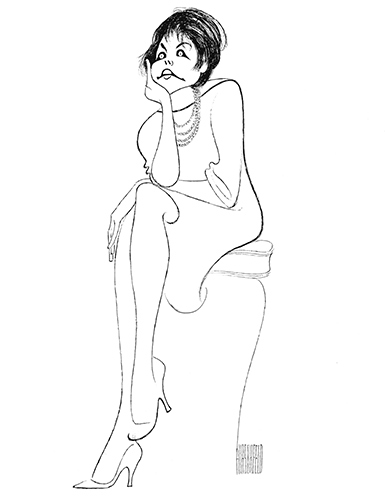 A Day in the Death of Joe Egg, the story of a marriage unraveling as the couple nurse their twelve-year old brain-damaged daughter. In a few lines, and a pair of small, expressive eyes, he captures Channing’s poignant moment at the end of Act 1 when she sits alone in the fading light and says, “I believe, where there's life, there's hope,’' and, in a whisper, asks, “Do you?” 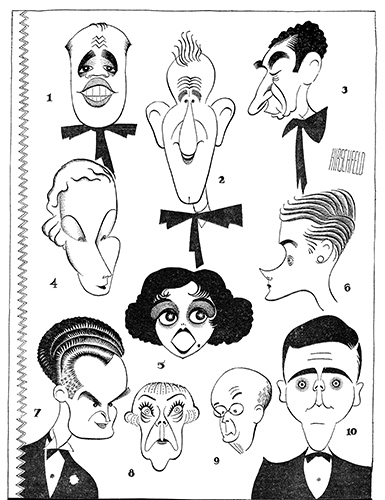 This Cole Porter revue, which satirized all sorts of New York types from socialite to bootleggers, introduced the classic “Love For Sale.” It was built around the talent of the up and coming Jimmy Durante. 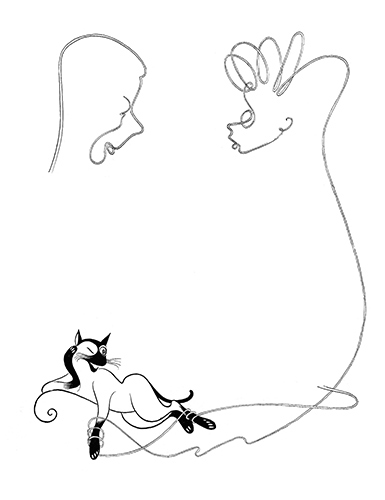 The cover of the Playbill of Bell Book and Candle featuring Rex Harrison, Lilli Palmer and Pyewacket the cat.

Catching an out-of-town tryout in Philadelphia in 1959, Hirschfeld drew Ethel Merman as Mama Rose in Gypsy as “a stage mother introduces her daughter to the art of the striptease" according to his hand written caption.