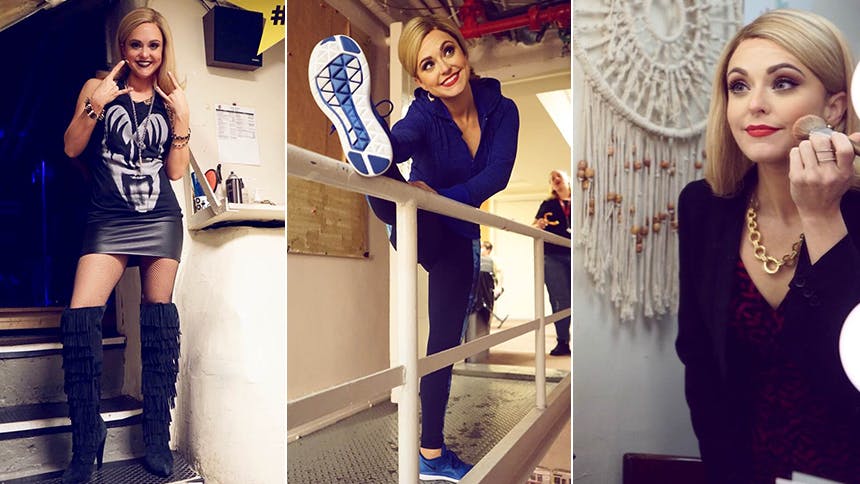 
BroadwayBox asked Lori to take us along on her Patty journey through her Anna Louizos School of Rock costumes. Scroll on to watch Lori's rock evolution.

These are all my costumes for Patty in School of Rock the Musical!! I actually love them all and would totally wear them all in real life….except maybe the pointy-toed heels.  My lovely sub dresser Devon Wycoff followed me around and took these pics for me!

Patty is very put together, from her hair to her make up to clothes to jewelry. She works for the mayor of the city and is VERY proud of that. Very Type-A.

This first shot is the opening dress and jacket. Originally, Patty’s opening costume was a hot pink pantsuit! It was very Legally Blonde. They decided to change it when I came in, and I got this cute red/pink and black dress and fitted blazer! I prefer it to the previous costume. I imagine Patty just came back home after a meeting with the mayor to find Dewey still asleep and her house trashed by him. She’s done with him at that point.


Patty on the Run

My second costume is an awesome blue workout outfit! Pants are from Athletica and hoodie is from Lululemon. I would TOTALLY wear this in real life and actually tried to find them to buy for myself! I also get to rock a cute pony tail in this look. I’m not a blonde in real life, so it’s awesome getting to be blonde on stage! They made a really great wig for me to match my roots and skin color and the brilliant Jason Joesph maintains it for me. Being very Type-A and a "responsible adult", Patty is taking a quick midday run. When she comes back home, she finds Dewey has brainwashed Ned into starting a band and playing video games, and gives Dewey an ultimatum to pay the rent in 30 days or get out!


Patty Gets a Break

SOOO this isn’t really a costume BUT I have about an hour break in the middle of the show! I’m either in my favorite robe from the Japan pavilion in EPCOT or the coziest School of Rock Horace Green sweat suit! This is also usually my dinner time :)


Patty at the Office

I LOVE this dress! This orange/red dress is from a brand called Black Halo. I know this because I have actually tried to find and buy it for myself. I love the slightly vintage shape of this dress. This is a typical work outfit for Patty and is what she wears for almost the remainder of the show, sometimes pairing it with the black blazer from look #1. Past Pattys have worn a larger peacoat for the outdoor scenes but the shorter cropped blazer suited me better as I’m only 5’3!

Patty's in the Band

Now finally…maybe my favorite (tied with the orange dress): Patty's costume for the bows! It's the only semi quick change I have in the show. Patty lets go of her rigid ways a bit….I think she realizes while she’s absolutely been right the whole time, sometimes it's OK to bend the rules and let go a little. I’m obsessed with these black leather fringe boots and have begged them to let me have them eventually! I also never thought I’d enjoy wearing black lipstick. A leopard print crop top, KISS tank top, and some rocker jewelry finishes this look for the bows!