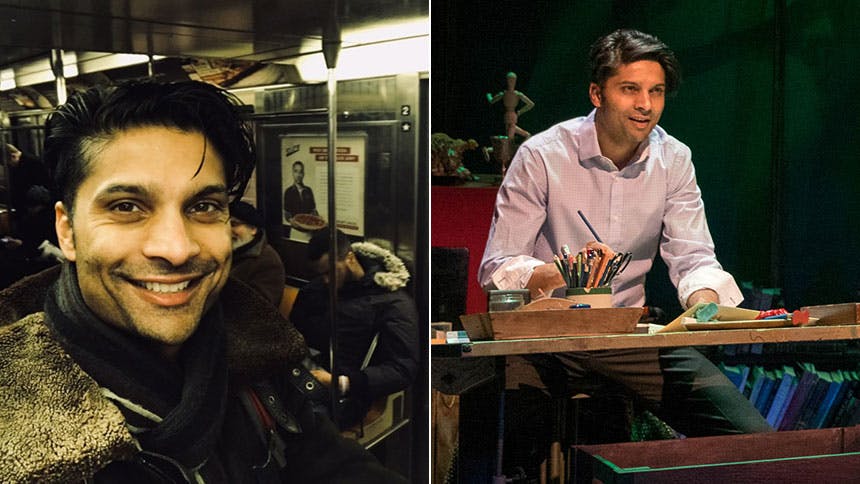 Rupak Ginn makes his off-Broadway debut as aspiring children's book author and illustrator Peter Chandler in the new play The Stone Witch. Peter gets the opportunity of a lifetime to assist his idol Simon Grindberg (stage and screen star Dan Lauria) in creating a final book. The only issue is Simon and his methods are beyond eccentric and the lines between assisting and ghostwriting become blurred.


BroadwayBox caught up with Rupak to talk about the show, his professional heroes, and the book he wrote and hopes to have published soon.

1. You've been with this show since its world premiere at the Berkshire Theatre Group. What first attracted you to The Stone Witch?
It was the role of Peter. His journey as a struggling but talented artist teetering between failure and greatness is rich and full in a way that many roles offered to me frankly had not been.

2. If you could work with any of your heroes and get paid $10K to do it, who would you pick?
Great Stone Witch reference! Among heroes would be Spielberg, Scorsese, and Spike Lee simply for the impact they’ve had on me since childhood—plus the latter two are New Yorkers like me! These days, I also really admire Taylor Sheridan (Wind River) for the honest simplicity of his filmmaking that just lets everything breathe so it actually affects you. On stage, it would be incredible to work with Thomas Kail—his work on Hamilton is groundbreaking, plus my castmate Dan Lauria worked with him on Lombardi and can’t stop raving about him. And I’m lucky to have been able to work with some of my heroes already, like director Nisha Ganatra!

3. What has your experience opening your first off-Broadway play taught you about yourself?
It reminded me how much I enjoy the challenge of imbuing a character with a sense of humanity. And the lifelong lessons of relaxation and listening continue—that’s where the real pleasure can be experienced, especially when working with great actors like Carolyn and Dan.

4. What is your favorite book?
Mine! Like my character Peter, I’m an unpublished author. But fingers crossed that will change soon, as I’m about to go on submission with my debut novel RAW Origins—a spy thriller starring India’s answer to Jason Bourne and James Bond (RAW is India’s CIA).

5. What’s your favorite memory from your time on the Royal Pains set?
My first encounter with Henry Winkler. Despite his having had such a long and illustrious career, right from the beginning he was sweet and down-to-earth. I ran into him recently at my son’s basketball game because his grandson plays in the same league, and he was as warm and ready with good advice as ever. It’s nice to see that our business has elevated such a kind person.

6. What was your experience like shooting in India for the film Khoya? What did you especially enjoy about being there?
It was a dream come true—another complex role, playing an adopted man who travels to India for the first time to find his birth family. I’m American (US born and raised), but India is like a second home to me, and every time I go there I find myself swept up in its unique magic. The best part though was getting to work with the immensely talented writer/director Sami Khan, who has since become like family to me.

7. What do you love about being part of the Indian Film Festival of LA (IFFLA)?
Getting a chance to connect with my fellow brown artists and showcase their work is my favorite part of IFFLA. For example, two years ago we did a retrospective where we screened filmmaker Nisha Ganatra’s brilliant feature debut Chutney Popcorn. She is now one of the most respected directors in our business, and it was a personal crowning moment for me to show people the film that started it all.

8. Tell us a memorable audition story.
A decade ago, my “day job” was working at a tech company for my mentor Jason Calacanis, one of the first investors in Uber. I got a last minute audition for a lead role in a Disney movie that I’d spent months trying to get in for. I snuck out of work to read with the casting director, and on my way back I got a call that the producers wanted me to audition for them. So I nervously had to ask for the rest day off before driving to the callback where I met the producer, the fantastic Debra Martin Chase (who is also on the board of Second Stage Theatre). Within a few days I got the call at my work desk that I had booked the role. I remember going outside and running a lap around the block with sheer excitement that I would finally get to be a working actor!

9. You’re also a dad. If you were writing a children’s book for your kids, what would it be about?
It would be about realizing that there is no need to be anyone else. You only need to discover and embrace who you are—and know that who are you has its own incalculable value.