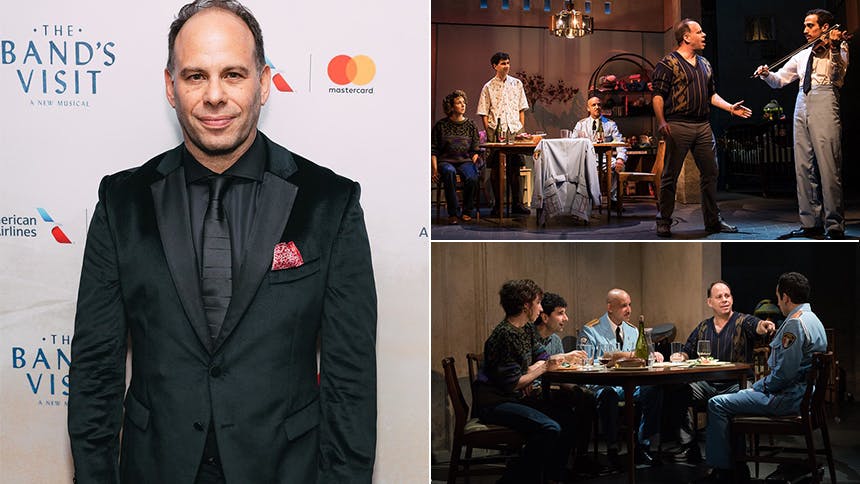 Andrew Polk makes his Broadway debut as Avrum in Broadway's acclaimed, hit gem of a musical The Band's Visit. Avrum is an Israeli father and grandfather who hosts some of the Egyptian band members and through music finds a connection with his foreign guests.

BroadwayBox caught up with Andrew to talk about the experience, putting pieces of Israeli in-laws into his performance, and his crash course in artistic director school.

1. The Band’s Visit is so much about these beautiful small moments. What’s your favorite small moment you share with a co-star onstage that a first-time audience member might miss?
One of my favorite small moments has several mini moments. It's when I say "Shalom Alechem" in Hebrew to the clarinetist in the band, Simon, and he responds with the Arabic; "Alaikum Salaam". It means "peace be upon you'' in both languages.  Afterwards, there is another small moment I love where I just stare at him as I try to work out if that is something I am supposed to like or not. It's a very real, complex and moving moment of connection for me.

2. How is making your Broadway debut different than what you were expecting?
The best description of making my debut is "surreal".  I've obviously wanted to work on Broadway for many years, but if you were to tell me three years ago that I would be making my debut in an original hit Broadway musical in which I sing and dance in my own musical number, I would have told you that you should seek help.  On the one hand, being on Broadway is no different than doing theater anywhere else: a lot of work and discipline goes into doing 8 shows a week. On the other hand, I am struck every day by the high caliber of the crew. Everything is done at the absolute highest level of excellence and that is very unique. I am also struck by the audiences. There is such an electric energy every night from the audiences that is unique to Broadway. There is no way to get complacent when the audiences are so dynamic. And, of course, I was struck by the crowds that wait to greet you at the stage door every night. That doesn't happen anywhere else. It's just incredibly exciting.

3. How has visiting and experiencing Israel helped inform your performance?
Visiting Israel has been essential in informing my performance.  As a fully assimilated American Jew, I had never visited Israel until 10 years ago when I met my wife, Zohar, who is Israeli. Since then I have visited many times. I have very dear friends and family in Israel now. Just getting to know the culture has helped me immeasurably. There is directness to the Israelis that I love. It can be shocking if you're not used to it, but they are incredibly warm, incredibly strong and complex people. I have brought a lot of my father-in-law, Peter, to my portrayal of Avrum. I have stolen some things from my mother-in-law, Ruth, and filched a few things here and there from some other Israeli friends.

4. How did your time as founding artistic director of The Cape Cod Theatre Project change how you looked at the theatre and how you worked?
Being artistic director and founder of The Cape Cod Theatre Project helped me gain a perspective of our business in so many ways. I didn't go to artistic director school, so I really built The Cape Cod Theatre Project from the ground up. I learned the meaning of every person's job in the theater out of pure necessity. For instance, I started by casting the shows myself until I thought I would lose my mind. Then I realized, "Hey, maybe hire a casting director!" Every position (from the board of directors, to interns to stage managers) I developed a real understanding for their purpose. I could go on and on but another fundamental thing I learned is that excellence wins out every time for me. In choosing plays, in choosing artists, in choosing staff, I learned to make it my litmus test. I also learned that, in building a company, a theater, it will largely be built by those people who show up—a very good lesson to remember I think. And I also learned how to delegate. The way I would figure that out is to ask myself, "Is this something an artistic director does?"  If it was, I would do it.  If it wasn't, I would delegate it. Finally, I learned that there are so many amazing American playwrights out there that are hungry to get produced. I was just proud that I could provide one avenue for their development.

5. Avrum and his Egyptian houseguest find a connection through music. If you were hosting strangers and wanted to connect to them through an album, what would you play them?
That's impossible. There is too much great music! But as Avrum is totally into classic rock of the late ‘60s, I would definitely try to get them to groove to some Creedence Clearwater Revival—or even some Led Zeppelin. The musicianship of those bands was incredible. I'd love to hear what the Egyptian band could do with that stuff on an oud and darbuka.