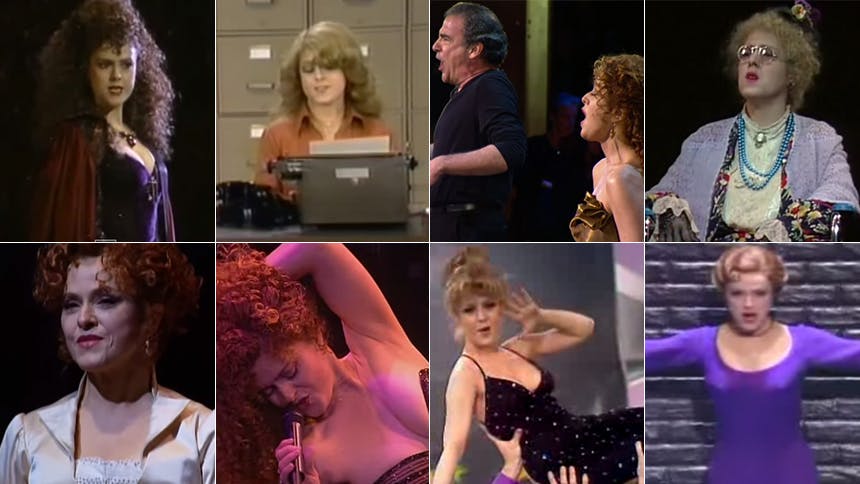 
This number gets high marks in high camp, and for a generation of gay men, it brings together Golden Girls and Bernadette—and what’s better than that?

24. “The Harold Arlen” Medley with the Boston Pops


I’ve always wanted to see her as Roxie, but she sure sells this Velma anthem.


And on The RuPaul Show none the less.


It's all about those moves.

18. “I Got the Sun in the Mornin’/Old Fashioned Wedding”, Annie Get Your Gun


Had to give a bit of her Tony-winning performance, even if it has subtitles and doesn’t begin until 1:10 into the clip, but it does include her acceptable speech.


Did you know Bernadette played Hildy in the 1971 revival of On the Town? Here she gives you a taste of her “I Can Cook Too” along with several other songs from the classic.

15. “Children and Art”, Sunday in the Park with George


Bernadette Peters’ Night Music performance was an incredibly heartbreaking, hard-to-forget moment in the theatre, and if this video was the full song it would have cracked the top 10.


Get ready to live your whole life in this 4-minute clip.


One of the highlights of her debut 1980 self-titled album, and in this performance she takes such a journey, she ends in tears. Bravo.


When are we going to get Bernadette Peters’ Joanne? Or her Mrs. Lovett for that matter?


But honestly, who does devastating better than Bernadette?

5. “Last Midnight”, Into the Woods


And suddenly you’re weeping at this Sunday reunion. #WeWillAlwaysBelongTogether

3. “Time Heals Everything”, Mack and Mabel


So many amazing “Not a Day Goes By” videos, choosing the best one was a masochist emotional chore but this is it. The commitment to acting is unparalleled.

See Bernadette Peters and pals at Broadway Barks 17 on July 11 at 3:00 PM in Shubert Alley