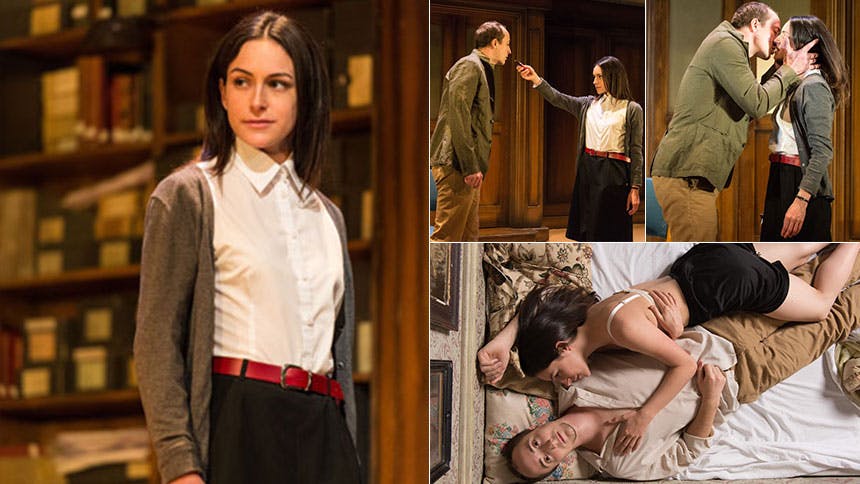 This Independence Day, BroadwayBox celebrates by bridging the gap between Broadway and the West End as we get to know Janine Harouni, a New York native who gives an incredible, disturbing and completely buzz-worthy West End debut as Julia, the mysterious leading lady of 1984. Below, the LAMDA graduate talks Big Brother, acclimating to London life and faking an English accent.

2. The ultimate femme fatale from film is:
Xenia Onatopp. The Bond baddie from Golden Eye who kills men with her thighs—so scary, so sexy.

3. The most f#*ked up love story that I love is:
Joel and Clementine from Eternal Sunshine of the Spotless Mind.

4. As an American working in London, my English accent idol is:
Renée Zellweger in Bridget Jones’s Diary—she puts all other American actors’ English accents to shame!

6. If Big Brother were watching me, the most embarrassing thing they'd see is a lot of:
Who said Big Brother wasn’t watching...

7. One thing London does better than New York and one thing NYC does better than London:
I’ve lived in a few cities now and nobody beats NYC pizza! The only thing I look forward to more than seeing my family back in NY is an artichoke slice...well maybe not more, but it's a very close second! As for the reverse, it’s gotta be a cold glass of Pimms in the summertime! There are very few things you can’t easily get overseas and Pimms is one of them- which somehow makes it taste even better.

8. Best advice I’ve received on making my West End debut:
As this is my first acting gig—I’ve received lots of really helpful advice. The company is made up of some unbelievable talented people who have shared some invaluable insights with me. But my favorite advice came from my mother, who after seeing the show told me she thought it was a very moving production but that my hair looked flat and advised that I “do something with it.” Thanks mom. Thanks.

9. The performance I saw that made me want to be a performer is:
There have been a lot at many stages of my life but some powerful ones have been Ben Whishaw in Mojo, Mark Rylance in Jerusalem, Patti LuPone in Gypsy and Meryl Streep in anything.

10. Musical or play that can always make me cry:
Musical: Gypsy. Play: It’s a toss up between Death of a Salesman and The Crucible. Waterworks every time without fail.

If you are in London, don't miss the debut performance of Janine Harouni in the heart-pounding West End adaptation of George Orwell's thriller '1984' at the Playhouse Theatre through July 25.