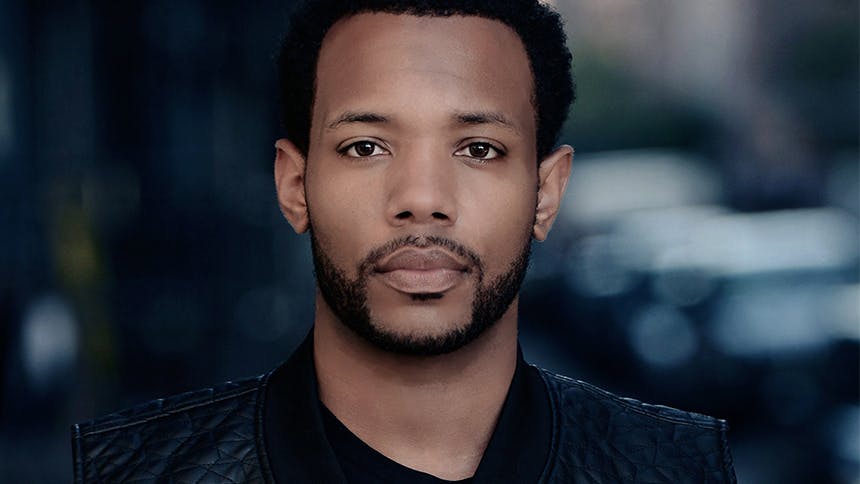 Do you hear the people sing? Singing the praise of Wallace Smith. The Broadway fave (Godspell, American Idiot, Lion King, Rocky, Ragtime & Hair) stars as Enjolras, the passionate revolutionary, in the acclaimed revival of Les Miserables, and BroadwayBox chatted via email with him about the epic musical hit, his album Oxygen and spending the summer with Mickey Mouse.

1. Les Miz is such a cry fest, what’s the last play or movie that brought you to tears?
The Pursuit of Happiness, starring Will Smith, turned me into a blubbering mess. The last scene when he gets the job and walks down the street with tears in his eyes just fills me up with so much hope. Oh, and The Lion King cartoon. You have to scrape me off the floor.

2. What’s been the biggest “pinch-me” moment on Broadway for you so far?
I have been blessed to have a couple of them, and I owe that all to the fabulous casting directors and their teams in New York City. One that sticks out in my mind is when I got cast in American Idiot. I auditioned for it the day after we got our closing notice for the revival of Hair. I was in a daze and wanted to be depressed but I went in for it, and director Michael Mayer whispered to me, “I'm sorry about your show closing.” And my knee jerk reaction was I didn't get the part in American Idiot either—lol. But at a call back the producers said to me, “Wallace, if you ever want to see the show just call our office and we will get you tickets.” It was at that point that I knew I booked the job, and I walked down the streets of New York with tears in my eyes and a knot in my throat. Just pure happiness!!!!

3. Let’s talk about Oxygen. Who inspires you musically? Is there an album that changed your life when you heard it?
I tend to draw a lot of my inspiration from a lot of different genres of music. My experiences inspire me the most. Life is the greatest motivator for lyrics and poetry. Eric Benet is also one of my favorite male vocalists. The album that changed my life when I first heard was Story of My Heart by big time producer and singer Mario Winans. I was a senior in high school, and listening to that album made me go buy a pen and paper and the writing began.

4. The ladies of Les Miserables have some EPIC songs (granted you have “Do You Hear the People Sing”), which of the ladies’ big ballads would you want to cover? Would you reimagine it a bit or perform as written?
Oh that's easy, it would definitely be “I Dreamed a Dream.”

I would turn it into a country song, like real Shania Twain-ish. I think that would be hot! Some acoustic guitar, a nice beat, some haystacks and BOOM!

5. What’s one thing on your summer 2015 bucket list? What do you have to do before summer’s end?
I HAVE TO GO TO DISNEY WORLD!!!!! My cast mate Arbender Robinson goes all the time, and we promised each other that we would go this summer. So...HERE I COME MICKEY!