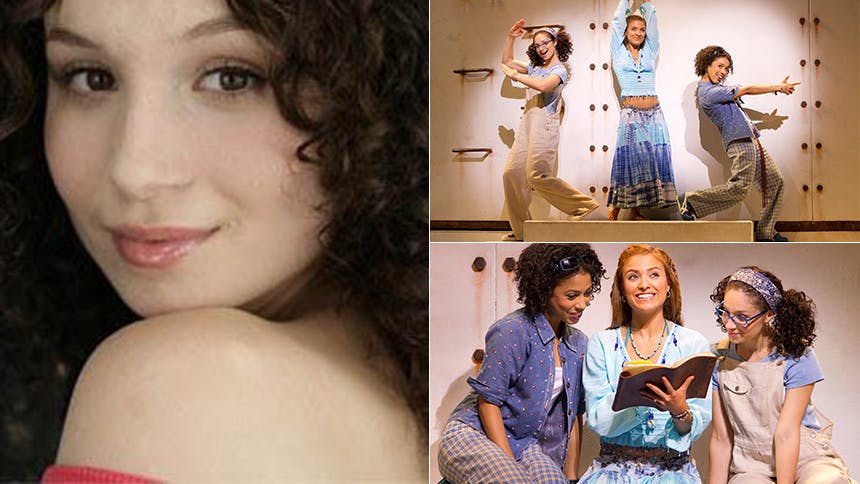 When Mamma Mia! performs its final megamix at the Broadhurst Theatre on September 12, longtime cast member Traci Victoria will be there singing, dancing, and living her entire life to the sounds of ABBA. Victoria made her debut in June 2012 as Sophie Sheridan's bestie Ali, the adorably nerdy gossip-starved friend in "Honey, Honey" and one of the bride-to-be's co-maids of honor. Below, BroadwayBox chats with the scene-stealer about the former Donna that rocked her world, growing up in Long Island and how she figured out who Sophie's dad is.

1. What is it about Mamma Mia! that kept you here for years? And how do you keep it fun and fresh for yourself?
The People! The company. The managers, the cast, crew, musicians, etc. Talent aside, Mamma Mia! tends to attract authentic, admirable people. It’s fun! I love my “job” (for lack of a more appropriate word…) i mean….. Our Stage Managers assemble our own version of the Olympic Games—lighting, rigged flags, opening ceremony and all! I mean COME ON! I don't find it to be challenging to keep it fresh….there are always changes of cast, choreography and (yes) theaters to work with. I get paid to have a disco dance party…..And thats what has kept me from looking elsewhere for my years here :)

2. As a native “Lawng-Islandah”, what’s your single, all-time favorite Billy Joel song?
“New York State of Mind.” Hands Down. I would listen to it when I was on tour in Asia whenever I felt nostalgic. I love Billy Joel's music. Side-note: I pass by his Sag Harbor house frequently in the summers (on my way to a bagel store, not to stalk, of course).

3. Let’s throw it back, you have a five- CD-changer stereo, which five cast albums make the cut and why?
42nd street—my classic Broadway favorite.
Titanic—my personal favorite all around score-an underrated masterpiece, in my opinion.
Avenue Q—for laugh therapy.
Don’t Look Down—a friend of mine’s self-composed musical that stretches the soul…. Disclaimer: there is a song entitled “Traci’s Song” in the album…so i am 99.6% biased… but hey, at least I'm aware.
Spring Awakening—THAT MUSIC!!!!
(I have to give an honorable mention to RENT)—If I hadn't played the (yes) CD to its LITERAL death while I was growing up, it’d be at the top of my list…..but I overdid it for myself, so Rent and I are on a double decade brake….kind of like watermelon Jolly Ranchers.

4. What stage performance did you see that will never leave you?
Beth Leavel as Dorothy Brock in the revival of 42nd Street is only comparable, in my memory, to herself, Beth Leavel, in the Drowsy Chaperone…. so I guess you can imagine my boisterous ( and obnoxious) excitement to hear that Beth was cast as Donna in Mamma Mia! in circa 2009/10?

5. In your opinion, who is Sophie’s dad?
Bill Austin. I mean come on- the dates are right there in the journal! Hypothetical conceptions are July 17, 1979 (Sam), August 4th (Bill), August 15th, (Harry). If she was fertile on the 17th, and a hypothetical conception occurred, she could have ruled out the second two menstrual—cyclically speaking. Same with the 15th. Only the fourth could potentially cause confusion…butttt then again, Donna spells “Doggone” incorrectly in the journal, so ya never know. ;) ………(Did I just get too left brained for a musical theater analysis?!)

You only have until September 12 to see Traci Victoria in the international smash 'Mamma Mia!'